Agalis Manessi is dedicated to working in the maiolica tradition. Her range of forms comprise dishes, vessels, figures, animals and plaques constructed from red terracotta clay, biscuit-fired and dipped in a tin oxide glaze to give an opaque finish.

Hand-painting directly on to this glazed surface, Manessi is part-ceramicist, part-painter. The ceramic surface acts as her canvas and the brush-painting technique enables the creation of depth, tone and watercolour effects as the colour is applied directly to the glaze. The combination of the painting and making process has always been fundamental to Manessi’s approach. Prior to working in majolica, she worked with porcelain and used the sgraffito technique to score into the raw clay before applying tin oxide glaze. The paint required for the desired image is created by mixing glaze with water and metal oxides such as copper, cobalt and iron. This part of the process is unpredictable but Manessi takes pleasure in the challenge and the exciting potential for creating new colours.

Manessi first found enthusiasm for ceramics at the age of six when her father took her to a local pottery in her homeland of Corfu. This early engagement with the medium eventually led to studies at the Central School of Art, London from 1973-76 where she was taught by influential artists including Gordon Baldwin, Gillian Lowndes, Eileen Nisbet, Kenneth Clarke, Dan Arbeid and the painter Geoffrey Rogers. Following her studies, Manessi set up a studio in her house in Hackney which she shared with her partner, the artist Rob Kesseler. In 2016 they moved to Kennington and she now divides her time between another London basement studio and her light-filled studio in Corfu. Her Mediterranean heritage and travels provide significant sources of inspiration for her work, as do the portraits, figures and animal studies drawn directly from life or museum collections. While Manessi was studying in London, she regularly frequented the British Museum and this experience remains an important influence on her work with vessels taking on the forms of mummified cats, painted with feline characteristics.

Manessi’s series of dishes hand-built from flattened coils of clay are influenced by the concept of the roundel in painting. These dishes have become the surfaces for a series of fresh and expressive portraits inspired by imagery in classical and contemporary painting.

She has exhibited widely in London and Greece. Her work is included in public collections including Ulster Museum, Belfast; Geffrye Museum, London and Usher Gallery, The Collection, Lincoln. 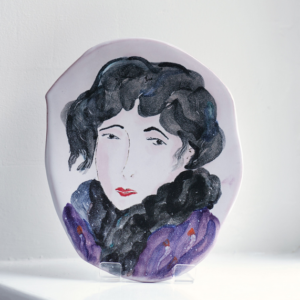 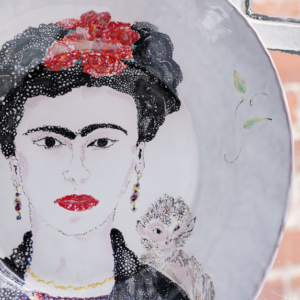 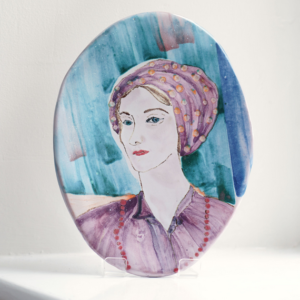