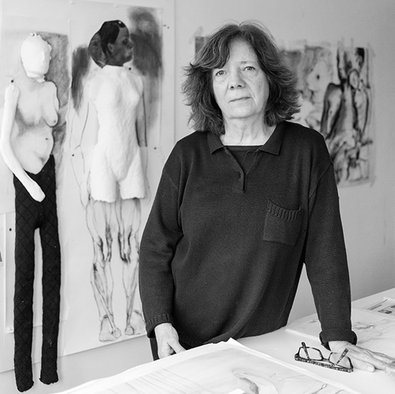 Christie Brown is an artist and Emerita Professor of Ceramics at the University of Westminster in London. She graduated from Harrow School of Art in 1982 and set up her north London studio that year. At Westminster she taught on the BA, MA and PhD programmes while maintaining and developing her sculptural practice. She was Principal Investigator on the AHRC project Ceramics in the Expanded Field, awarded to the University’s Ceramics Research Centre-UK in 2011, which included her solo exhibition DreamWork at the Freud Museum in London in 2012. Recent major exhibitions include Marking the Line at the Sir John Soane’s Museum (2013), Material Earth 1 and 2 at Messums Wiltshire (2017 and 2018), Humanism at the ClayArch Gimhae Museum, Korea (2018),  Dream On at

the V&A Museum of Childhood (2018), Cultural Icons at the Potteries Museum and Beyond the Vessel at Mesher, Istanbul (2019).

Christie continues to exhibit her ceramic sculpture widely in the UK and abroad and frequently lectures about her practice at international residencies and conferences. Her work is featured in several private and public collections in Europe and the USA, including the Victoria and Albert Museum UK and the Mint Museum USA.