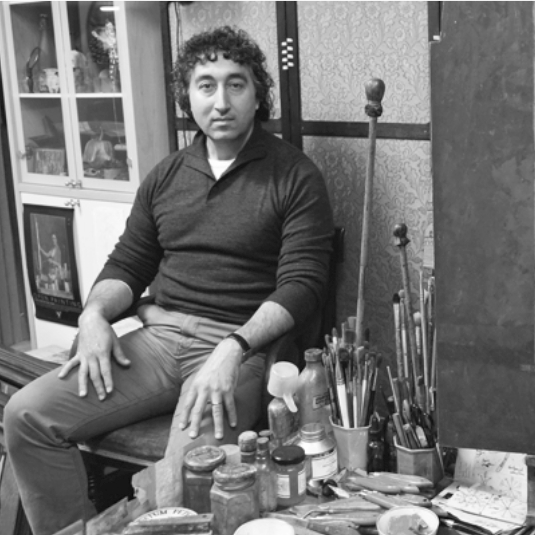 “[Portraiture is] the most complex of the visual idioms, both structurally and psychologically, and consequently the most fascinating, as one is dealing with humanity itself or in mirror reflection, ourselves. It is also a microcosm in which one can explore almost all the problems of drawing and painting.” – Saied Dai

Dai describes himself as an “abstract figurative” painter, underlining his talent for capturing both the underlying geometry of his subject as well as its surface detail. His studies began in architecture and he believes that it is drawing that “reveals the way an artist thinks. It is the means by which one makes visual relationships.” He credits his training at Bouremouth, Poole and especially, the Royal Academy, where his tutors included Norman Blamey and Roderic Barrett.

In 2004, Dai was made a member of the Royal Society of Portrait Painters and his commissions include The Duke and Duchess of Devonshire, The Very Rev. Christopher Lewis, Dean of Christ Church, Dame Stephanie Shirley, Major Charles Marriot, Yeoman to the Queen’s Body Guard, Sir Christopher Frayling, and most recently, his portrait of Dame Monica Mason, former director of the Royal Ballet, recently unveiled at the National Portrait Gallery. Dai’s work is also in the People’s Portrait Collection at Girton College, Cambridge and in several important private collections in the UK and elsewhere.

Dai lives and works in Bath. Persian by birth, he first arrived in England at the age of six.