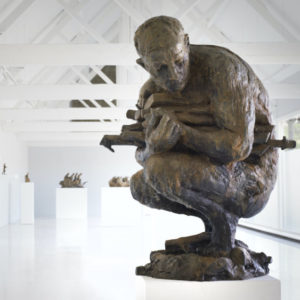 Laurence Edwards: A Gathering of Uncertainties

Developed in partnership with Messums Wiltshire, this exhibition will be the first exhibition of contemporary sculpture in the recently completed North Gallery at Orange and will radically transform the space, offering Australian audiences a rare encounter with Laurence Edwards’ work.

‘Whether in the form of small-scale studies, or large imposing figures, Edwards’ bronze figures have an immediate and compelling presence. This is due in part to the tension in his pieces between a raw, potent physicality and the psychological ambiguity of his subjects, who often appear to be held inwardly in a state of fragility or uncertainty.’

Edward’s work is also notable for its refined aesthetics and technical brilliance. Casting his own works, Edwards’ practice is rooted in tradition and a material knowledge of bronze that he has gathered from Europe, India and Nepal. Yet he also subverts associations with the medium as it has been traditionally used in placing seemingly enduring, heroic or triumphant men on pedestals. These histories in colonial contexts like Australia are especially complex.

A Gathering of Uncertainties presents instead masculine figures that are ephemeral, vulnerable and displaced. His subjects exist as outsiders or revenants, cluttered with debris, or seemingly bewildered by internal cross-currents. They are both potent and scattered. While Edwards’ figures feel intensely personal, they also bring a deeper and emerging universal disquiet out into the open.  It is my hope that this presentation of Laurence Edwards’ works in Australia, will contribute to the re-emergence of the figure in contemporary sculpture, which has largely moved to the periphery.’The exhibition will be accompanied by a substantial catalogue featuring an extended essay by Fiona Gruber on the significance of Laurence Edwards and his exploration of these themes.