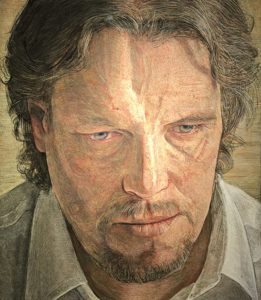 Exhibition opens at 10am on 14 September
For an online collector’s preview please register interest:

‘Williams’ art is as closely observed as the 1930s nudes of Stanley Spencer or the early work of Lucian Freud, with similar intensity – and, like Freud, Williams avoids working from photographs. The great strength of his work is that this exactitude of observation and technique still allows for complex emotional responses, with meaning being reserved and implicit.’  Ivor Braka

This exhibition will showcase a collection of paintings by one of the leading contemporary figurative artists, Antony Williams, and will present two significant series of portraits.

The series of paintings of Williams’ landlady Margaret Robinson that he produced over a period of sixteen years have been assembled from private collections for the exhibition and will be displayed together for the first time. Williams painted these portraits annually

from the time he moved his studio into Margaret’s house in 2000, until her death in 2016. Painted in the exacting medium of egg tempera and directly from the model, with sittings taking place weekly or sometimes several times per week for long sessions, each portrait of Margaret was produced over an approximate six-month period.

Together with this portrait series of Margaret, a new group of intimate portraits produced by Williams over the last year will be presented. These will include sitters that Williams has previously painted, for example ‘Caroline’ who he first painted in 1997 and ‘John’ in 2004, alongside a new sitter ‘Alice’ who he has never painted before. By painting models who have differing levels of familiarity, Williams continues his engagement with surveying the effects of time and experience which he investigated in a similar way with the series of portraits of Margaret.

Williams trained at Farnham College of Art and Portsmouth University. He is Vice President of the Royal Society of Portrait Painters and is a member of the New English Art Club and the Pastel Society. His work is based on intense observation, particularly of human flesh, creating as a result, a heightened sense of realism. He works almost exclusively in egg tempera – a painstaking, exacting medium in which egg is used instead of linseed oil as the binding medium. While oil allows for a degree of flexibility and manipulation of the painted surface before it dries, many days after initial application, this technique does not easily allow for alteration.

It was this medium that Williams used for his remarkable portrait of the Queen in 1996. The painting elicited controversy, particularly in the depiction of the monarch’s hands as Martin Gayford comments,

Williams’ still lifes and portraits – like much art – underline the passing of time and mortality. This was the reason no doubt why his fine portrait of the Queen caused controversy. Inevitably, his method, his close vision, revealed that that these were in fact the face and hands of an ageing woman. That is not how everybody chooses to think of the monarch. But as a work of art, and an exercise in sober, careful truth – telling like the best of his work – it was indeed, very impressive.”

An illustrated publication will accompany the exhibition.