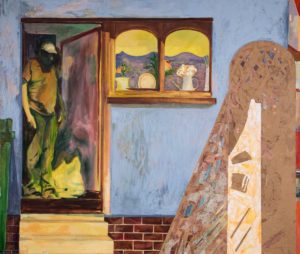 Theatre as Studio, Studio as Theatre

London-based artist Jack McGarrity is originally from the West of Scotland. He trained at The Glasgow School of Art and The Royal Drawing School with residencies at the Museo del Prado in Madrid, having been awarded the Richard Ford Award, and in Florence for the John Kinross Award.

Equally concerned with both quotidian mundanity and the heightened reality of film and comic books, McGarrity creates new narratives that explore notions of the absurd, stillness and alienation in the modern world. Embodying a wry sense of humour, his collaged enactments present scenarios that are, at times, idiosyncratic and mordant whilst retaining an essential sentimentality. His work relates to the great tradition of narrative painting while is also located within the revival of figurative painting in contemporary practice.

For this body of work, McGarrity has again been observing the everyday with many images drawn from the immediate environs of his studio and flat but intertwined with multi-layered narratives. Considering how different scenes can be depicted in the one image whilst retaining a cohesive whole, he employs collage as a way of disrupting the idea of the picture plane. Series has become an important factor in his painting with familiar motifs reappearing in different works. The images and motifs have been drawn from the area McGarrity grew up in Scotland and found in previous drawings. Combining these familiar motifs with subjects from mass culture, he blurs the line between public and personal. The images from mass culture are drawn from a variety of sources that infiltrate our lives, for example some work featured in the show contains stills from British dating game show Love Island which prompted McGarrity to contemplate its voyeuristic nature and reflect on ideas of the philosopher and social theorist Jeremy Bentham and the concept of the panopticon. 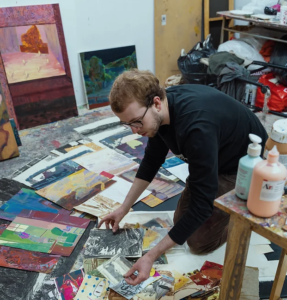 McGarrity joined the Messums Emerging Talents Programme with an exhibition at our Wiltshire Gallery in July 2021. Since 2016 we have supported an annual emerging talent programme that champions artists at the beginning of their career. The programme has seen six years of burgeoning talent grow into established creative strength with Messums and elsewhere.