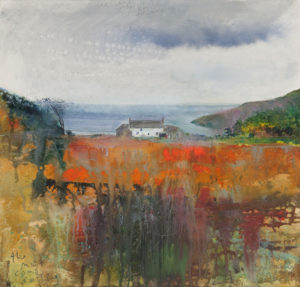 Exhibition goes live at 10am on 1 December
For advance information and a collector’s preview please register interest:

Two series of new paintings from two different residencies on Scottish islands by Kurt Jackson will be shown for the first time in London this December. One painted in and around George Orwell’s former home, Barnhill on the coast of the Isle of Jura – a remote and isolated house where time has stood still and the location for the writing of Nineteen Eight-Four. The other in a traditional ‘blackhouse’ on the Isle of Skye, a small thatched croft house in a crofting township.

“I was aware of the Scottish blackhouses of old, the “tigh-dubh.” I had read about the homes of the crofters that were built with the materials to hand, thatched, low local stone walls, dumpy and sturdy, they were the vernacular architecture,” he says. “[Now] forlorn, sinking back into where they came from.”

Jackson travelled first to Jura, on an invitation to take up residence in the former bolthole of George Orwell. Barnhill was a place where Orwell had fished, swam, tended to his garden and meditated on the spectacular surroundings. It was also the place, most notably, where close to death and beset by creative demons, he penned his masterpiece Nineteen Eighty-Four. During Orwell’s time on Jura, “[l]ife was simple, even primitive. There was no electricity. Orwell used Calor gas to cook and to heat water. Storm lanterns burned paraffin. In the evenings he also burned peat. [The] fug in the house was cosy but not healthy. A battery radio was the only connection with the outside world.” [Robert McCrum]

When Jackson arrived, he found the house like a shrine to the author: “His typewriter still sat on the table in the window of his writing room, his portrait was on the mantelpiece, the furniture and decor were unchanged, the same old generator for electricity still had to be coaxed, chugging into action.”

Positioned above the Sound of Jura, Barnhill looks out towards the mainland. It is about as Westerly a point as Jackson’s home in St Just, 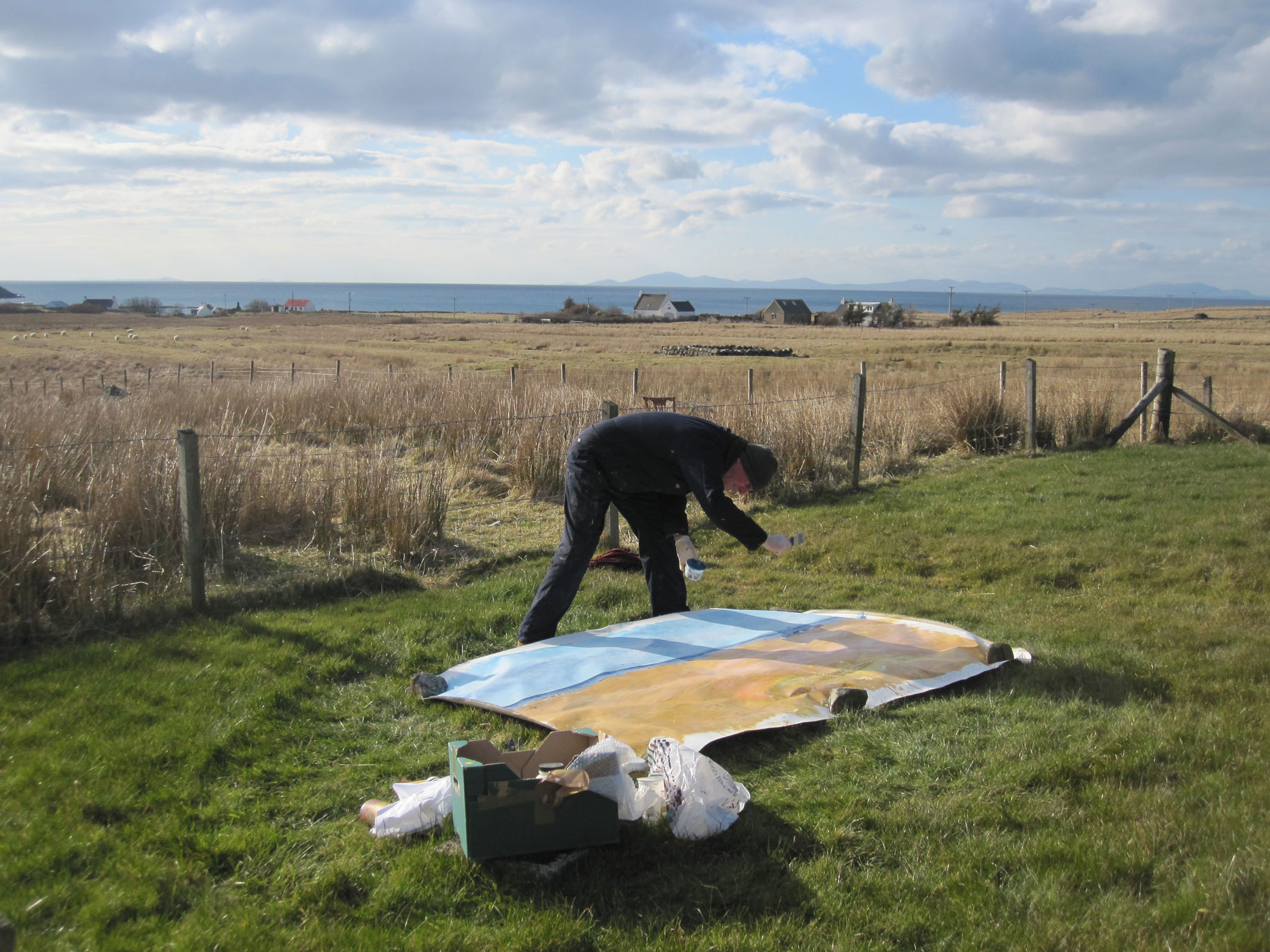 Cornwall and the artist kept a few crab pots, tied to the low water rocks, to help supplement his food supply – the remote location is more than 5 miles away from a road and more than 20 to the nearest shop.

Jackson painted the house, the haunting stillness of a home frozen in time, ‘Orwell’s lingering presence’. He painted the churning waves over the Sound of Jura, rain and gales amongst sodden bluebells and bracken, the wildness of the remote, boggy landscape and the changing light that envelopes it.

“Jackson is a natural, born artist. He lives and breathes marks and colours, spontaneously catching a sudden squall at sea, dazzling sunshine on a track in Greece, soft, evening light reflected in the Tamar.” [Julian Spalding]

On Skye, Jackson stayed in Morag’s Croft – a century old house, small and low, that sits in a small, fenced plot on the edge of a crofting community. “There were sounds of sheep and pipits, the wind blew; occasionally a small tractor would pass but otherwise it was quiet,” says Jackson.

It was stepping back in time to a simpler way of life. Outside the sea was visible with the islands of Lewis and Harris on the distant, hazy skyline. Largely alone, Jackson captured the scenery that surrounded him – out to the ocean, looking inland towards mountains, the house, the lanes surrounding it and the hinterland beyond.

“Jackson’s subject is nature, both human nature and the natural world, and the relationship between the two – a vital subject for us today []. The artist is not alone. He is part of a rising tide of awareness of what we are doing to the planet. He is the equivalent in art to films of the natural world, such as those of David Attenborough, Alastair Fothergill and Keith Scholey, but his art goes a step further, or, rather, takes a step back, as we all have to do if we are going to save our world.” [Julian Spalding]

Jackson’s artistic practice ranges from his trademark visceral plein-air sessions to studio work and embraces an extensive range of materials and techniques including mixed media, large canvases, print-making and sculpture.
A dedicated environmentalist, Jackson’s holistic approach to his subject seamlessly blends art and politics providing a springboard to create a hugely varied body of work unconstrained by format or scale.