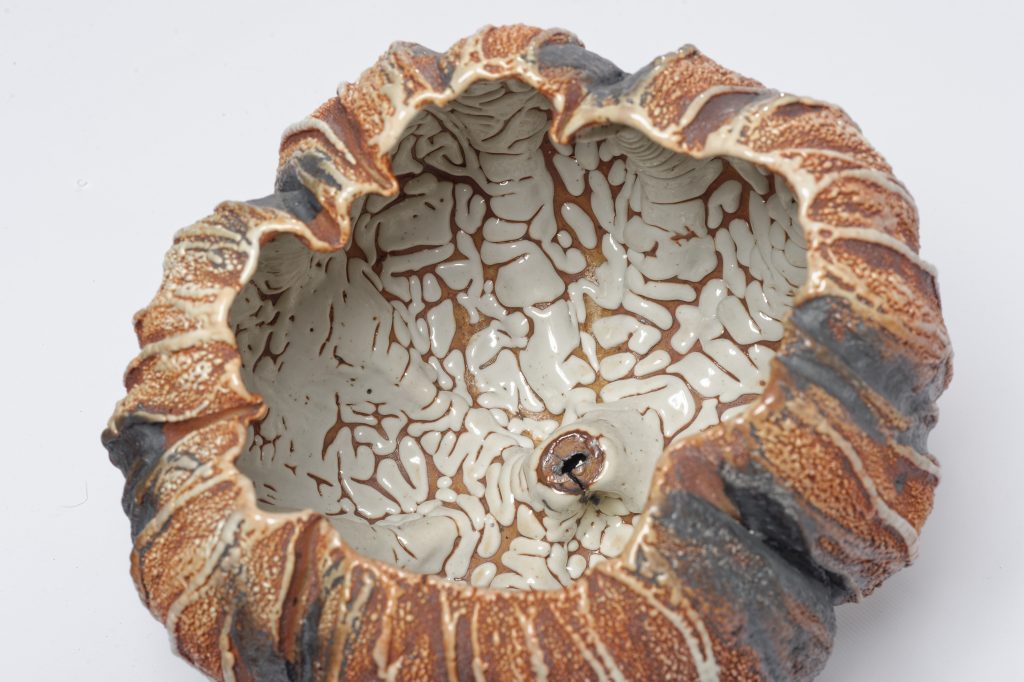 Thiébaut began his career in 1976, training in France, Belgium and in England under Michael Cardew and Richard Batterham. Returning to France in 1981 he set up his first workshop in the Loire Valley and in 1984 built a new studio in the Vosges with a wood-fired kiln.

Examples of his work can be found in many public collections across Europe in Belgium, France and Germany. He is represented in the V&A museum and has recently been exhibited in the Louvre.

“In May 2012 I visited Thiébaut Chagué at Taintrux in north east France. Taintrux is in the Vosges, an area that has witnessed battles and bloody conflict over many centuries. The Vosges retains a secret fairy-tale quality and Chagué’s home is surrounded by meadows and encircled by small mountain peaks, dark with fir trees and with deciduous trees on the lower slopes, just coming into bright spring-time leaf. One surviving industry in this remote area is logging.

It is a good place for a potter with a wood-fired kiln. Nicholas Bourriaud’s term esthétique relationnelle, describing art that produces or prompts human relations, sociability and even conviviality, comes to mind. Of course, Chagué spends time alone in his studio, with its view of meadows and mountains. But his natural playfulness and gift for friendship have led him into communities of all kinds. He has worked alongside the women potters of the Gwari village of Tatiko in Northern Nigeria. He makes the firing of larger works performative and very public – most memorably in the garden of the Victoria and Albert Museum where in 2010 he created an improvised kiln around his mighty sculpture La Soif et La Source.”  Tanya Harrod, design historian and co-editor of the Journal of Modern Craft…read essay in full