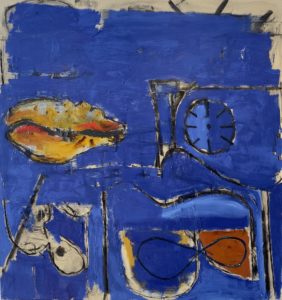 The impact of the work of British-born artist John Walker has resonated for over 50 years. His unique and imaginative painterly language has influenced generations of artists. Walker represented England at the 1972 Venice Biennale, won the 1976 John Moores Painting Prize, had extensive survey shows at both the Tate and Hayward galleries and was nominated for the Turner Prize in 1985. His work is represented in collections across the world.

Since the 1980s John Walker has led a significant narrative on Abstract Art with work that focuses on nature, emotion, and, in particular, place. He states, “I want to be the painter who knows more about that one place than anybody in the world.” Having bought a house at Seal Point, Maine in 1989, he has spent several decades looking out onto the view of the Atlantic, and it is this specific coastal landscape that has provided essential subject matter with the elemental drama of land, sea and sky. He has been inspired at different times by the art of Oceania, European masters Goya, Manet and Matisse, and the work of the American Abstract Expressionists. Pictorial and pattern motifs are recurrently strong features of his work ranging from the ‘Alba’ shape in his painting from the 1980s, polka dots and egg-like orbs in the 1990s, and, in the last 20 years, a combination of amorphous shapes and zig-zag lines.

This exhibition presents a significant body of recent paintings by Walker, including a dynamic series of seven large scale, predominantly blue and white, canvases all completed in the last year. Pared down, bold and expressive, these paintings are full of vigour, vitality and freedom reflecting an artist who, now in his ninth decade, is working with as much fervour as ever.