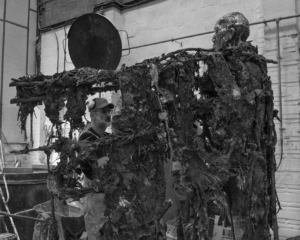 After the Flood: Laurence Edwards’ six-foot male figure has collected a carapace of debris. Tree branches, grasses, matter both vegetable and animal, man-made and natural, reshape him. He seems to have sprouted wings – strong protrusions spring from each shoulder and these flanks are fourteen foot in width. But this horizontal beam could also be a yoke, balanced on his shoulders, weighing him down. The figure’s arms are by his side, suggesting the burden is not of his choosing, and the rigid pose suggests both resistance and acceptance. And bearing witness.

We tend to think of artists as devising work in a linear fashion and of that work being finished when it leaves the studio. But many artists retain relationships with their creations after that departure and sometimes their meaning can change; new experiences can flow backwards in time, adhering to the body of a piece already in existence as new ideas evolve in the mind of the sculptor.

This is the case with After the Flood. The original title of Edwards’ monumental work was The Catcher and from the start, adherence was central to the concept. In its original iteration, Edwards saw his man as burdened by personal concerns; this changed after a visit to Australia in 2018, where he showed his work in Sydney and Melbourne; responses to his work were strong and time and again, viewers read his Catcher in the context of a shared disaster and a collective responsibility.

Edwards’ now imagined another role for his burdened man; the wingspan of accretions that defined his figure had shifted, he explains, to an exploration of the impact of natural cycles and man-made cataclysms.
The metaphors I was thinking through before were personal and psychological; now a whole environmental aspect reared its head.

Edwards’ experience of the southern continent’s outback and its vast river systems has had a profound affect on him. They’ve revealed the realities of a landscape shaped by drought and periodic floods, a parched terrain where rivers only flow for parts of a year, or even only a few times in a century but where ferocious cyclones can dump a deluge in a couple of days; once these waters flowed across the plains bringing life; now, they also bring death and destruction, drowning and destroying a land already wounded by over-use and manmade mistreatment.

This ancient terrain is very different from the geologically young and restless land of East Anglia and the North Sea, where Edwards lives and works. Australia’s fossilised soils are among the oldest and least fertile on earth and the continent is also home to the oldest continuous living culture; for over 60,000 years humans have trod lightly on this thin crust of soil, but, since colonisation began in 1788, an Aboriginal philosophy of living with the land and being of the land has been superseded by one of dominance, trying to bend the land to human needs, often with disastrous results.

When white settlers first started grazing and farming Australia in the late 18th century they were struck by the well-ordered nature of the landscapes they found. They assumed the lightly wooded grasslands were natural, not realising that millennia of fire farming by its Aboriginal inhabitants had created ideal conditions for hunting and gathering.

The soil is ancient and friable; it hadn’t experienced hooved animals like sheep and cattle before. Add to that intensive agriculture and, two hundred years later much of the soil now has toxic levels of salinity; the change in the water table has destroyed fragile ecosystems that have thrived for thousands of years. And with climate change, rising temperatures are outstripping nature’s ability to adapt.

Edwards’ sculpture has now taken on a whole new identity. As with his previous travels to Siberia, he has been confronted with the harsh realities of a rapidly changing climate and ecology. He explains: The idea of this character standing in the wake of an ebbing tide after a deluge intrigued me…this character could be a monitor, an evidence collector, a barometer even of our relationship to nature and in Australia at this time this seemed prescient.

Edwards’ man is a sentinel; his knowledge of climate change and environmental disaster is modern humanity’s urgent burden. But it’s also the weight of knowledge and impotence faced by those from ancient cultures who see their land destroyed and their wisdom ignored. And there’s a duality to the Catcher. He’s looking both backwards and forwards at the flood that’s been and the flood to come; Edwards explains it this way: I’m conscious of dynasties of indigenous peoples that have lived with the nature there, and this has helped to fine-tune the directions in which I want my work to go. I look forward to further iterations of the sculpture developing with me through time– monitoring if you like this unfolding story.

The unfolding story is part of a deluge of ideas. After the Flood is the beginning of a dialogue with a new and very ancient continent.