An Interview with Tuesday Riddell 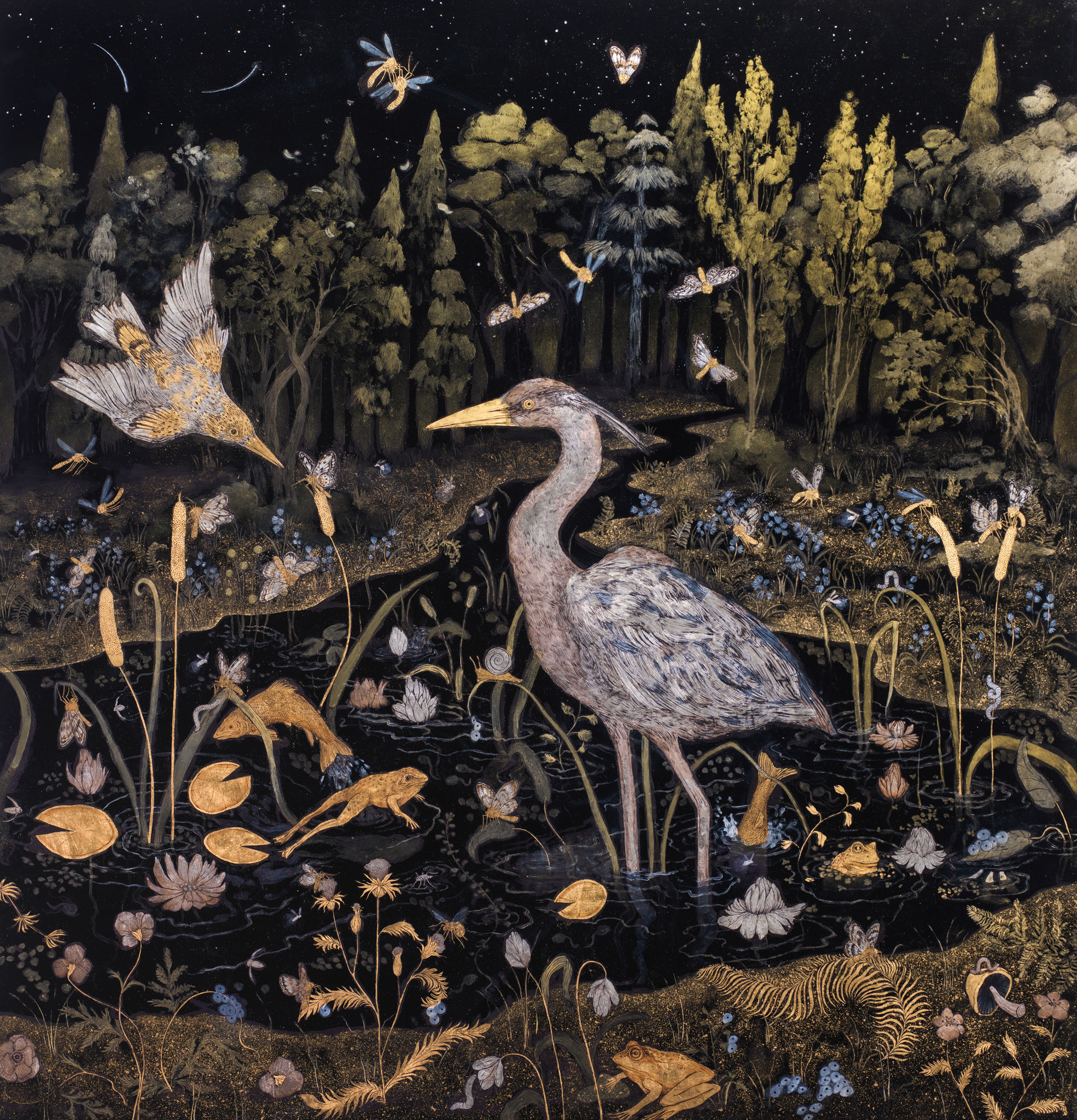 Your work seems to have become more complex and intricate in the last six months, featuring more reptiles and insects. Is there a reason for that?

There are a lot of snakes, it’s true, and I’m not entirely sure why. I suppose I have seen them in Sottobosco paintings, but I think it’s possible that subconsciously they hark back to the stories I saw in books at the religious schools I went to as a child; there were always images of snakes winding down trees.

It’s just such an archetypal thing that we all relate to in a way.

The trees in your pictures often seem to have been cut down?

Composition-wise I like the way cut in half tree’s look, I find tree stumps a satisfying shape to paint because it’s fun to japan things that have a very three-dimensional feel to them and it was in a narrative sense very much related to the themes in my work throughout my practice. There’s also something odd about finding a tree stump in the forest and seeing how nature interacts with something that has been unnaturally altered by humans, like how sometimes they use the surface as a little table or burrow into the middle and make hollow tree stump homes.

How come the new works feature so much of what is going on beneath the ground; is it some commentary on the soil which sustains us all?

I have been reading about underground fungi and how it connects everything; mushroom spores, dandelion clocks, pollination – are all part of systems I never realised were there before.

I remember looking at biology textbooks when I was young and thinking how little we know about what happens under the ground. There is something spooky to me – almost a horror element. The centipedes in our garden are so odd – so alien-looking. They move so strangely and don’t look natural.

There seem to be a number of surprising conjunctions in the new works; a snake feeding a spring of lavender to some baby birds for instance or putting its nose into a bluebell?

I like putting things in places where they shouldn’t be. In the painting of the mushroom ring for instance, I didn’t want the mushrooms to make sense so I made each one of a different variety. I wanted it to be a mutated version of a mushroom ring.

I have been reading Japanese manga series like Nausicaa, Valley of the Wind in which, after the destruction of the world, nature destroys man. I have also been reading the Annihilation series by Jeff VanderMeer in which nature mutates and I can’t help thinking, of how human destructive activity impacts different species of animals, plants and the environment in general, events like global warming are a clear example and it makes you wonder if even things like the pandemic could be related to our reckless treatment of nature.

What are the glowing balls hanging off the cobwebs in so many of your scenes?

Having perfected the use of black lacquer and gold – there seem to be greater use of colour in these latest pictures?

I have in the past struggled with using colours, though I love colourful compositions and I have tried at times to create more colourful works in different mediums, I just  found that for me, It didn’t click. One colour pop is okay; like a red coral snake or sea anemone to emphasise the silver and gold. Tulips are one of my favourite flowers but not for their colour; I like their shape and their leaves which are always so cartoonish and curly.

Why the rock pools?

I have always been obsessed by rockpools. I grew up near Jesmond dene in Newcastle and as a child I used to visit Tynemouth beach and St Mary’s lighthouse, I would spend so much time staring into rockpools near the lighthouse, they look like little portholes to another world which I guess they kind of are. The rockpool  I have painted is an extracted rockpool, the way you would see them illustrated in science text books at school with all of the different layers.

You have made your biggest work for this exhibition; made of nine panels it measures more than two metres high and has at its centre a painting of a heron in a pond; a still point is an almost wild scene. Can you explain what you were thinking as you made it?

I wanted to express the co-dependency of elements in the natural world and all of these latest works – but particularly this one – are a bit more chaotic and busier than they were with things spreading everywhere.