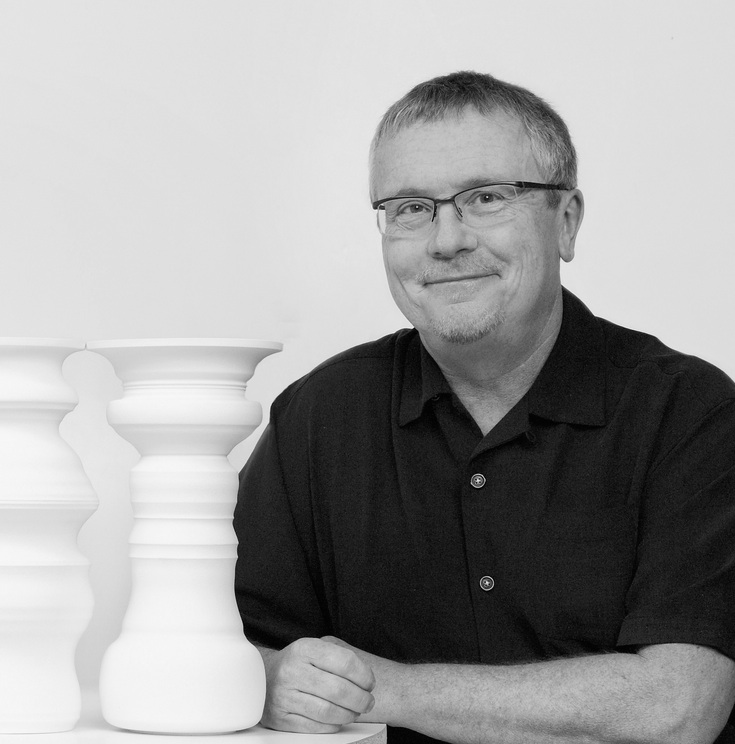 Greg Payce lives and works in Calgary, Alberta and was Professor of Ceramics at the Alberta College of Art and Design (ACAD) before stepping back to concentrate purely on his work. Raised in Edmonton, Payce’s interest in ceramics began in his early years when he knew from the age of six that he wanted to be a potter. From that time onwards he engaged with the medium which eventually led to a BFA from the University of Alberta in 1977 with a minor in anthropology and, in 1987, an MFA from the Nova Scotia College of Art and Design in Halifax (now NSCAD University).

Through the decades he has developed a superb form of trompe l’oeil that is entirely his own, in which thrown vessels, sometimes in pairs, sometimes in rows, appear to have standing figures in

the negative space between them. In his work, people fill the voids. In this way, his art gives us one of the most poetic and timeless visions of the relationship of people to pots. He has made for us an essay on the intimacy of ceramic to civilization.

Payce has been making ceramics for over 55 years and has exhibited his work in over 30 solo, and over 150 group exhibitions in Canada and abroad. Examples of his work are held in numerous public and private collections. His practice has been reviewed in over fifty publications and he has presented lectures and workshops nationally and internationally.

In 2012 his exhibition Greg Payce: Illusions was held at the Gardiner Museum in Toronto which was followed in 2013 by receiving the Governor General’s Award for Media and Visual Arts – Saidye Bronfman Award for Fine Craft. In 2015, Payce retired from teaching at The Alberta University of the Arts and is currently Professor Emeritus at the Alberta College of Art and Design. He recently completed a Canada Council senior artist grant to undertake research, make studio work for exhibitions, and present lectures on his practice internationally. In 2018 he held a Solo Exhibition of his work with Art Mur Gallery in Berlin. His work was recently featured on the cover of Ceramic: Art and Civilization by Paul Greenhalgh.

Brothers and Sisters: Nelson and Maya

The Customs and the Spirit of the Nations ”Candide”