Christie Brown: In the Depth of Matter 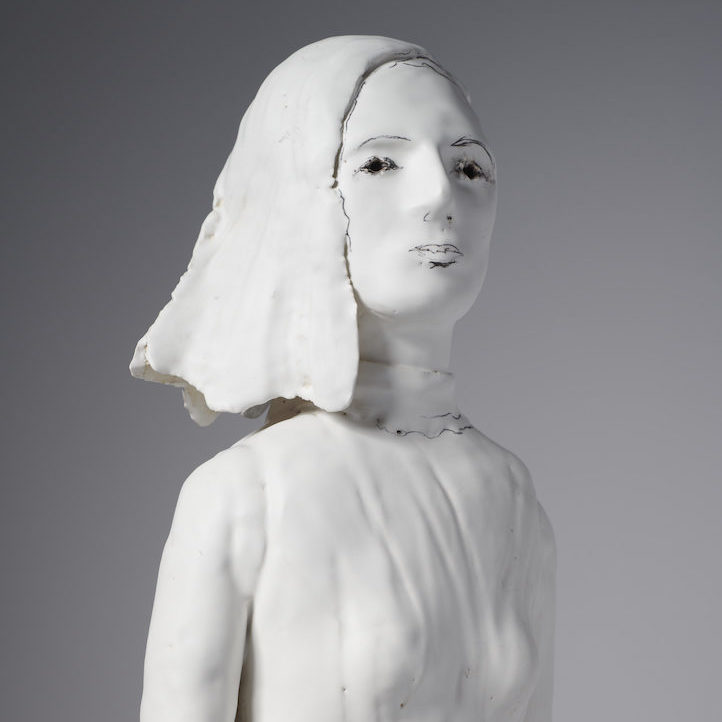 Christie Brown’s figures teeter on the foggy intersection between art and craft. Very clearly sculptural but informed by a deep history of clay. Upon graduating from a diploma in Studio Pottery at Harrow in the early 1980’s, Brown found her work without an obvious niche. Alongside her studies in clay, Brown had taken up life drawing, traditionally a very fine art practice, but she saw a potential correlation between the drawn line and clay forms. Encouraged by her tutors, clay provocateurs like Mo Jupp and Richard Slee, Brown attempted a translation of line to clay and began sculpting figures. Early works were suggestive of the body, torso reliefs, but became full-bodied, freestanding with limbs, heads and eyes that returned your gaze. Figurative sculpture was and is a prominent genre of the fine art world, but Brown’s use of clay set her apart from this. Similarly, in the ceramic world, key makers were testing the preconceptions of clay through the Abstract Vessel, but figurative ceramics had not enjoyed the same coming-of-age in the UK as in the US. As such, from the very beginning Brown’s figures are born into otherness. Almost indefinable, they are never quite set in one discipline, seesawing between craft and art, challenging those preconceived ideas. But look closer and it’s clear this otherness runs much deeper.

Brown maintains that her sculptures are not about the body but are concerned instead with representations of the human form, mimetic objects such as dolls, puppets and statues. Her sculpting method, press moulding bodies and collaging hand-sculpted appendages, lend a repetitious quality, almost production-line made, and each series has a sense of kinship. As such, the viewers’ doll-like associations to Brown’s work is intentional, she has no ambitions towards verisimilitude.

Brown’s figures emerge from a deep interest in psychoanalysis and archaeology. Before discovering clay, Brown was reading Freud and Jung, exploring the collective unconscious and the dream world. Her practice references ancient mythology, contemporary folklore, archetypes and artefacts to reconnect our personal unconscious with collective instincts. Freud proposed archaeology as a metaphor for psychoanalysis, excavating the mind to find buried relics of the subconscious. For Freud, and so Brown, historical objects and museum collections are markers of history and interlocutors of the past, bridging the known and unknown, the conscious and unconscious. Following this, Brown has worked in response to numerous museum collections including the Petrie Museum, the Freud Museum, and the Museum of Childhood. Brown’s newest works, instead of reaching back into history and delving into our psyche, address the here and now of the human condition, confronting the viewer with themselves. The life we see in Brown’s works may appear to be unconnected to her influences but our reaction is deeply rooted in our experience with human-like figures, from play in childhood, to ritual in death. 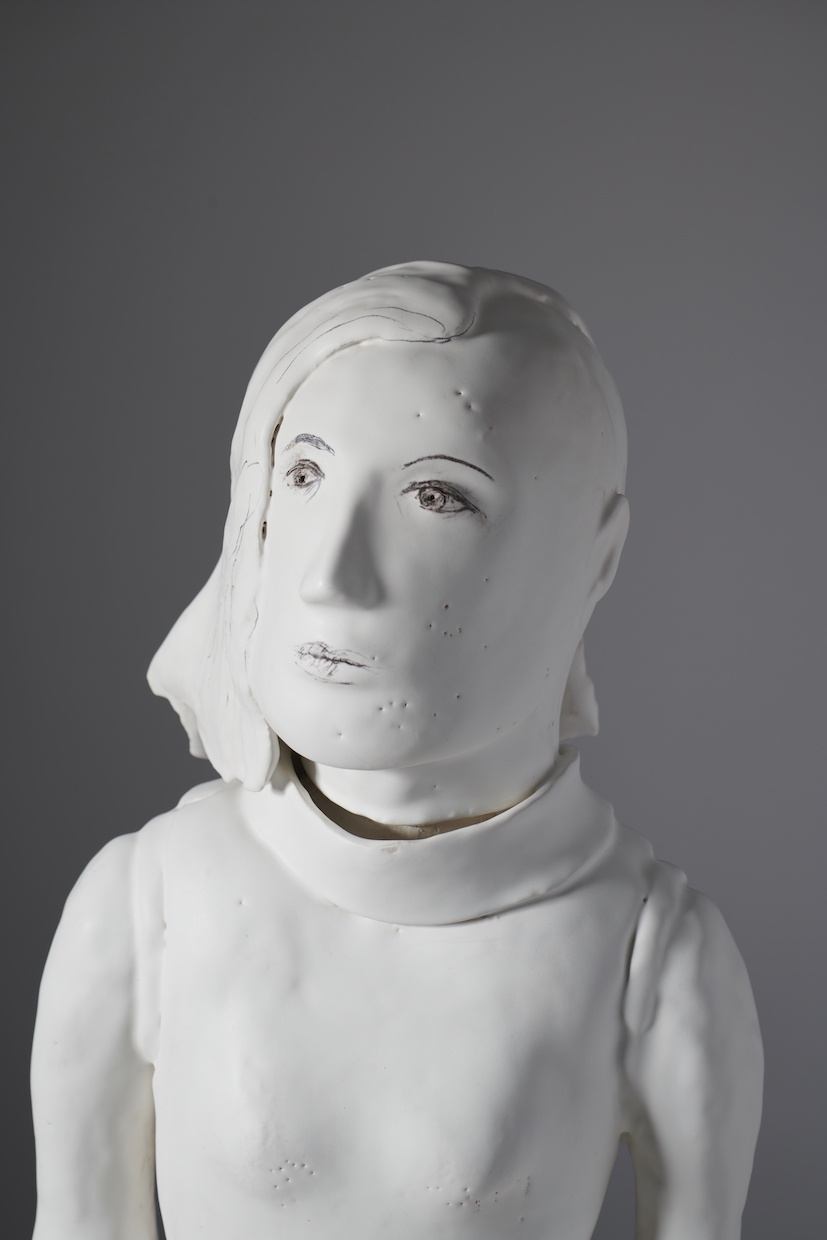 Our enlivening of Brown’s human-like entities is a basic function, somewhere between animism and anthropomorphism, imbuing an object with anything from the simple spark of life to a full personality. This spectrum of life is the core of our experience of Brown’s work.  Philosopher Carveth Read marked animism as an effect of deification during ritual activity, causing a venerated object to be perceived as imbued with life or spirit, as interlocutors between an unseen plane and our reality. For Jung, ritual behaviours channel psychic energy towards the unconscious. Brown’s figures function between this, to bond with the collective unconscious through the personification of archetype, ancient symbols of liminality and the hybrid beast, to bridge our individual conscious and unconscious psyche, and animism is the vehicle. Read’s animism can be applied to any object, human-like or otherwise, but it is the particular myth-making around animated human-like objects that appears to lead to our attribution of life in Brown’s figures. 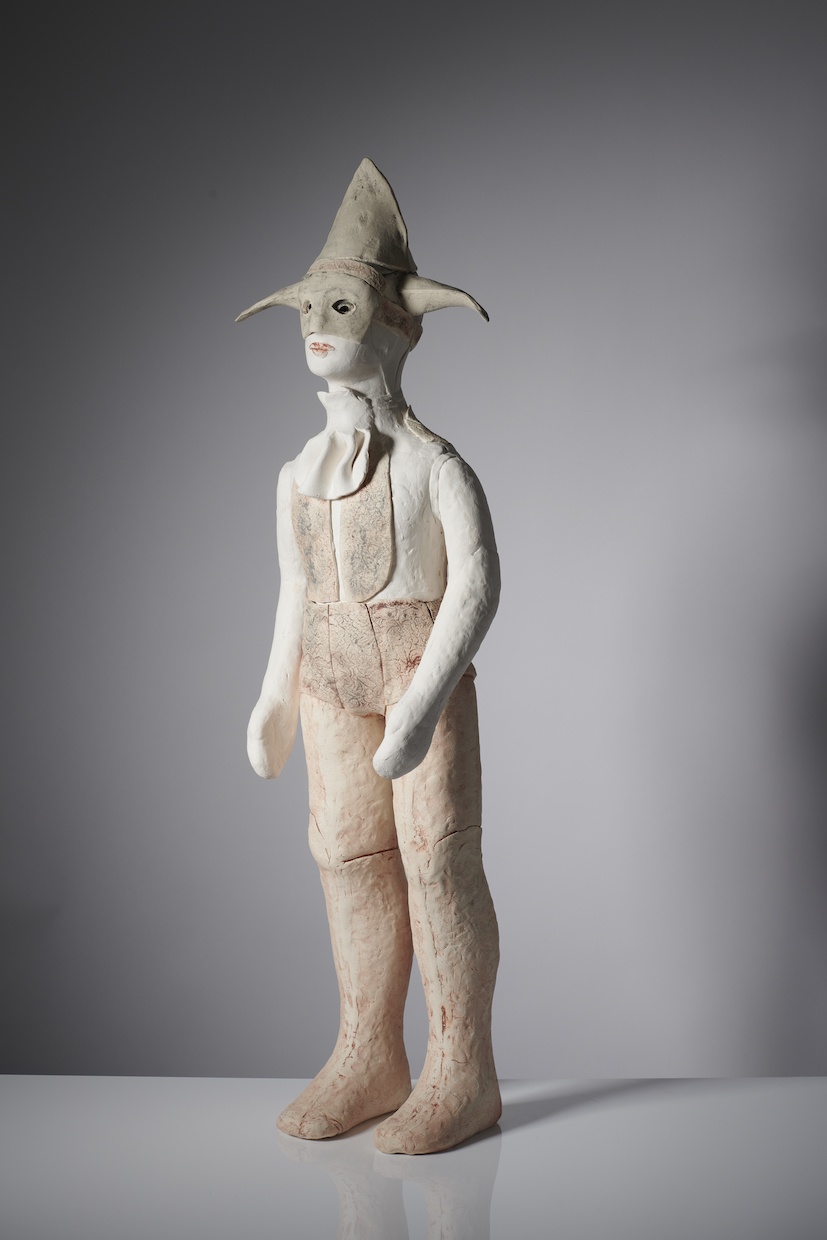 Statues are generally built with the purpose of reverence, as markers of importance to celebrate the individuals they depict. Sculpted figures are raised, literally and symbolically, to attract attention, be they religious, aristocratic or domestic characters and they are, to an extent, deified. Following Read from deification to animation, so has developed a rich historical and contemporary narrative of those objects coming to life, the living statue. Beginning, appropriately, with stories world-wide of the Creator forming humankind from earth’s clay, to Ovid’s Metamorphoses, where sculptor Pygmalion falls in love with his statue, later brought to life by the Goddess Aphrodite. Other examples follow across time and medium: Queen Hermione in Shakespeare’s The Winter’s Tale, Oscar Wilde’s the Happy Prince, and avenging Talos in Jason and the Argonauts. Brown’s figures tap into this recurring motif to provoke our anthropomorphising of her sculptures, a universal reaction symbolic of a collective archetypal instinct. Brown has found much inspiration in statuary and many figures recall classical archaic sculpture, in particular. Her early torso forms seem plucked from the ancient Parthenon and full-body figures echo the archaic Greek Kouros in their static posture, enlivened through modest gesture and subtle counterpoise. From the viewer Brown’s living statues may interact and influence as in the stories above, or merely be watchful and guarded, enjoying admiration.

Brown’s research practice explores the non-decorative history of clay, examining museum holdings and archaeological treasures. Her work links, not only with imposing architectural statuary, but with personal commemorative objects from burials and private enshrinement, dug from buried tombs. She has found particular inspiration in ancient Egyptian objects, half-human half-animal deity statuettes, hordes of faience shabti figurines, the work force of the afterlife, and clay memorial amulets imbued with protective spirits. Brown’s figures, her animal-human hybrids in particular, connect our contemporary consciousness with these ancient symbols that acted as mediators between the everyday and the mysterious, the physical and the ethereal.

Read extends his theory specifically to funerary objects, ripe for animism as a condition of their function. As the physical buried object cannot travel with the deceased’s spirit, the object itself must be imbued with such a spirit that can be transported. Read describes this as ‘soul-stuff’. The physical object is static but the life imbued is viable, almost tangible. For Brown, these archaic objects not only highlight the importance of clay as a material for reverence, but they are signposts for transition into other states of being. Her figures echo these ritual objects and, by association, are clearly imbued with that same ‘soul-stuff’. Their doll-like scale and troop-like composition recall the regiments of buried shabti, a miniaturised terracotta army that could be imagined surfacing from the strata of an archaeological excavation.

Simultaneously, our animation of Brown’s figures is rooted in childhood experience with dolls and puppets. Children’s play time is built of intense imaginary belief, encouraged by parental interaction where games are played and lessons taught with the help of an animated toy. Numerous stories depict adventures had by sentient toys: Dumas’ the Nutcracker, Collodi’s Pinocchio, Raggedy Ann, Toy Story, and we carry this into adulthood. Brown says, ‘in my work the experiences of childhood are never far away’ and her figures catalyse our memory, signposting our transformation away from that state. In her tableaus we see figures amassed with intention, ready for action, as a child enacts scenes with their toys.

This childhood recall is coupled with the uncanny valley, a phenomenon recognised by roboticist Masahiro Mori in the 1970s to describe feelings of eerie-ness towards an imperfectly human-like object. Despite familiarity, the brain detects inauthenticity and provokes a feeling of distinct otherness. Brown describes her figures as bordering on the uncanny, breaching a liminal space between familiar and other, focusing on that point of metamorphosis.

In translation from the Japanese ‘bukimi no tani genshō’, the uncanny valley garnered an unintentional connection to Sigmund Freud. His 1919 essay “Das Unheimliche”, literally translates the uncanny as ‘The Unhomely’, suggesting one is made to feel unwelcome or intrusive. Freud describes the uncanny as a resurfacing of repressed infantile complexes, in its most basic comprehension, manifesting when tapping into the viewers’ unconscious and surfacing memories or happenings from childhood. This bridging of the psyche, connecting past with present and collective with personal experience, is key to Brown’s work. The phenomenon of the uncanny valley facilitates an exploration of that ambiguous space by suggesting otherness in the familiar.

However, this ‘uncanny-ness’ has been exploited and heightened in horror genres of contemporary pop-culture. Television and film tap into the motif of the haunted doll, countering children’s stories of adventuring toys with darker tales: Chucky in ‘Child’s Play’, the clown in ‘Poltergeist’, ‘Talky Tina’ of the Twilight Zone’s ‘Living Doll’. Despite some viewers admitting an eeriness around Brown’s figures, any darkness is neutralised by the figures’ non-confrontational familiarity. They make no efforts to trick or confound us as to their reality. Their simple forms and plain expressions render their doll-like-ness playful and almost humorous. We recognise their animism as our own. 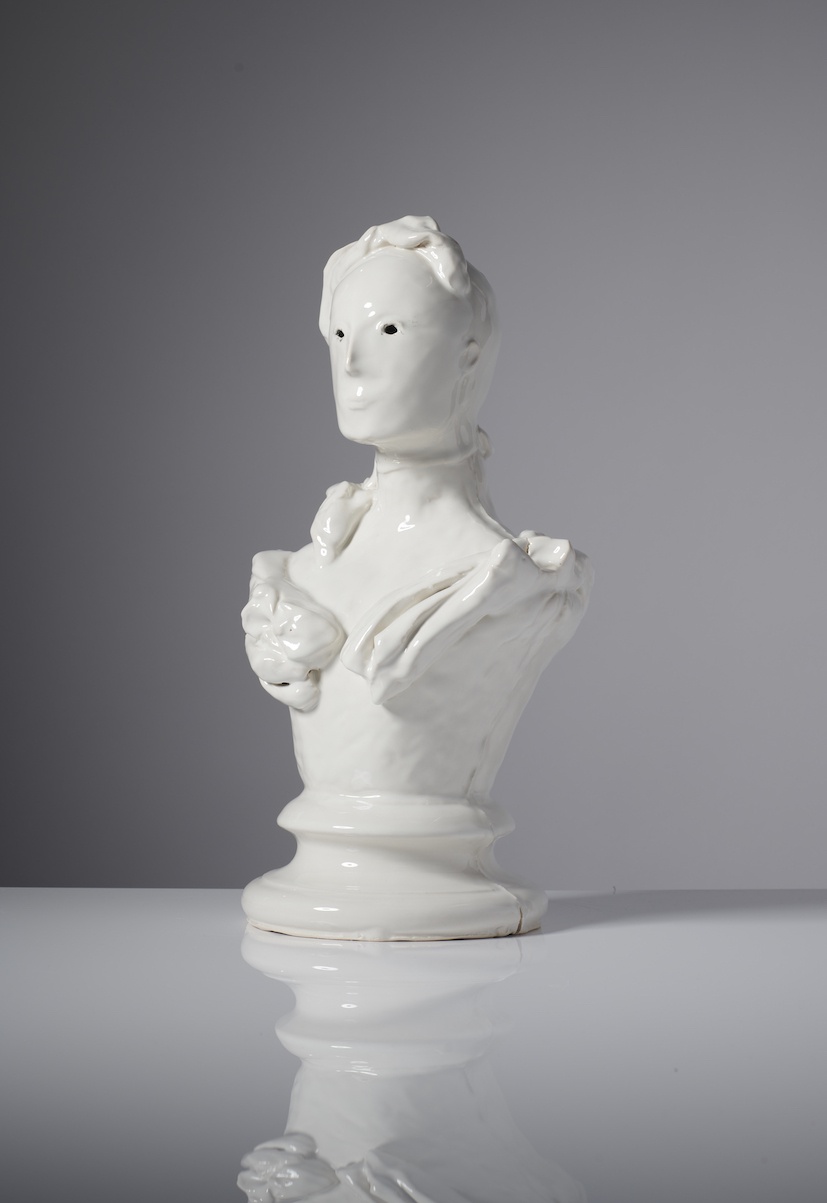 Brown’s newest sculptures have seemingly moved away from manifestations of ancient symbols and mimetic forms to focus on the human experience. These figures even have expression as Brown experiments for the first time with drawing on her sculptures. The eyes are concentrated, brows furrowed, lips primed to speak. Brown’s figures appear anxious, lonely and despondent, perhaps a glimmer of hope in some faces, but Brown admits she has unconsciously channelled her own recent emotions into these works.

Under the burden of this last devastating year, these figures manifest a truly universal experience. There are no archetypes to guide our actions, we have no instincts this far from normality and Brown draws attention to the heavy toll of that, stripping away the stiff upper lip and brave faces. Throughout her work Brown has examined the collective unconscious and the liminal spaces of our being and, through characters that we animate, she allows us to better know ourselves. These new sculptures are literal personifications of our contemporary experience and encourage an acknowledgment of that fragile state, advising us to embrace and nurture our current otherness.

The title of this exhibition is Brown’s final nod to the secret life of her figures, giving credence to our imaginings. Quoted from Bruno Schulz’s The Street of Crocodiles (1934), it declares ‘There is no dead matter… Its inertia is merely an outward show behind which untold forms of life lie hidden’. Throughout, all manner of inanimate objects are imbued with short moments of illusory life. Schultz, it seems, can’t resist animating the lifeless figures around him: ‘have you heard at night the terrible howling of these wax figures, shut in the fair booths; the pitiful chorus of those forms of wood or porcelain?’, and, ‘the light … thick from dreams of plaster cast heads … listen … to the silence laden with the sighs and whispers of the crumbling gods’.

Schulz also ventures a reasoning for this animism, asserting every person’s appetite for genesis. ‘We wish to be creators … we want to have the privilege of creation, we want creative delights, we want – in one word – Demiurgy … for creation is the privilege of all spirits.’ Numerous passages even depict the sculptor: ‘In the depth of matter, indistinct smiles are shaped, tensions build up, attempts at form appear. The whole of matter pulsates with infinite possibilities that send dull shivers through it. Waiting for the life-giving breath of the spirit’.

Brown has found her own demigury, creating her world order in clay.