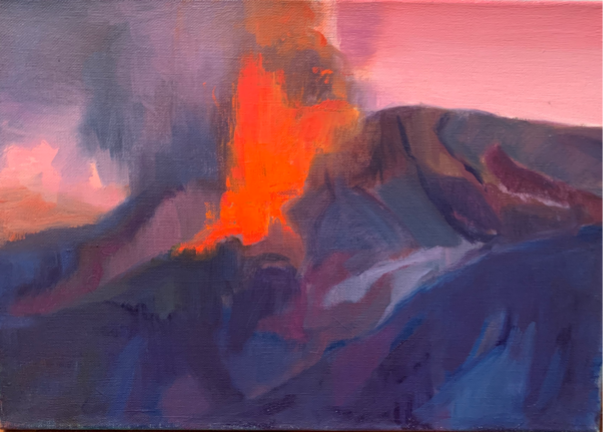 Exhibition goes live at 10am on 18 August
For advance information and a collector’s preview please register interest:

Francesco Poiana’s diaphanous and dream-like renditions of Italy are like memories, both contemporary and rooted in history. Working both in his London studio and en plein air in the Italian landscape, these recent paintings reflect our surreal and quietly wild times and form his second solo exhibition with the gallery. They are spontaneous, visual notes that speak to the past as well as something of our contemporary concerns.

Poiana is an Italian artist living and working in London that has sought to recreate the landscape of his home in the Dolomites; both by painting within it and also from memory, back in his studio in Bethnal Green. Born at the foothills of the Alps thirty years ago, the son of a winegrower and architect he attended art school in Rome before conducting a Grand Tour in reverse, coming to London – to Central St Martins – to study Fine Art and thereafter the Royal Drawing School. Over the past year, and when travel restrictions allowed, he made two trips back to Italy, traveling around the country of his birth, to Bologna and further south to Puglia, returning in between to his studio to draw on his memories of home like never before.

The artist is as comfortable in the past as in the present; his works are both classical – growing up as he did in landscapes of the sort painted by Lorrain and Poussin – but also contemporary. ‘I’ve always used art as a way to understand and at the same time hide from the world,’ he says.

‘This series of works are a reflection on the daily, on the dirt roads, an invitation to an intimate voyage towards the intangible image of a golden elsewhere; the country, the sea and the vineyards, where nothing happens and everything speaks about an era made of light.’

He adds: ‘In an increasingly, confusing and complicated world, there is a level of mystery I can’t explain in words. That mystery is what intrigues me and triggers my commitment to being in the studio day after day. In this new series of artworks, I’ve noticed that there are symbols emerging from experiences filtered by the memory and a new intensity of colour and saturation as well as a sense of a material land that seems to have been forged by light and colour.’

Lockdown has pushed Poiana to take his work in directions he has not explored much before; from working primarily with printmaking and painting on paper to layering paint onto canvas and gessoed board.

‘Using drawings I made in the landscape, and using memories, I form what is almost a collage in my mind which I piece together in the studio,’ he says. ‘Lockdown has been good in some ways as I have had time to reflect on my practice and I am painting these new works to a level of detail and finish that I haven’t done before even though I always like to keep some parts of each of my pictures less defined than other bits to give people a chance to imagine something of their own; their own reality.’

Inspired by the crepuscular tone of Symbolist painters like Edvard Munch and the fluid lines of Honoré Daumier, Poiana has an innate flair for making art with the smallest gestures.  His method is neither assertive nor submerged and like Luc Tuymans or Peter Doig his pictures have a stillness and opacity to them that hints at a narrative but keeps it hidden.

In these recent works, it is the paint itself that is alive, and every work has a sense of imparting energy, psychology and potency – regardless of its subject.

‘Making Introductions’ is a series of five films produced in partnership with our artists and focuses on the techniques that stand at the core of their respective studio processes. All of these short classes can be followed at home.  In one fifteen-minute video we hope you will learn a little about one of our artists and a lot about their process.

Every masterpiece starts with a sketch, every journey with a step. It is often forgotten that art is as much a language as speaking. “Making Introductions” is about learning these different ways of communicating and being able to take part in the conversation.