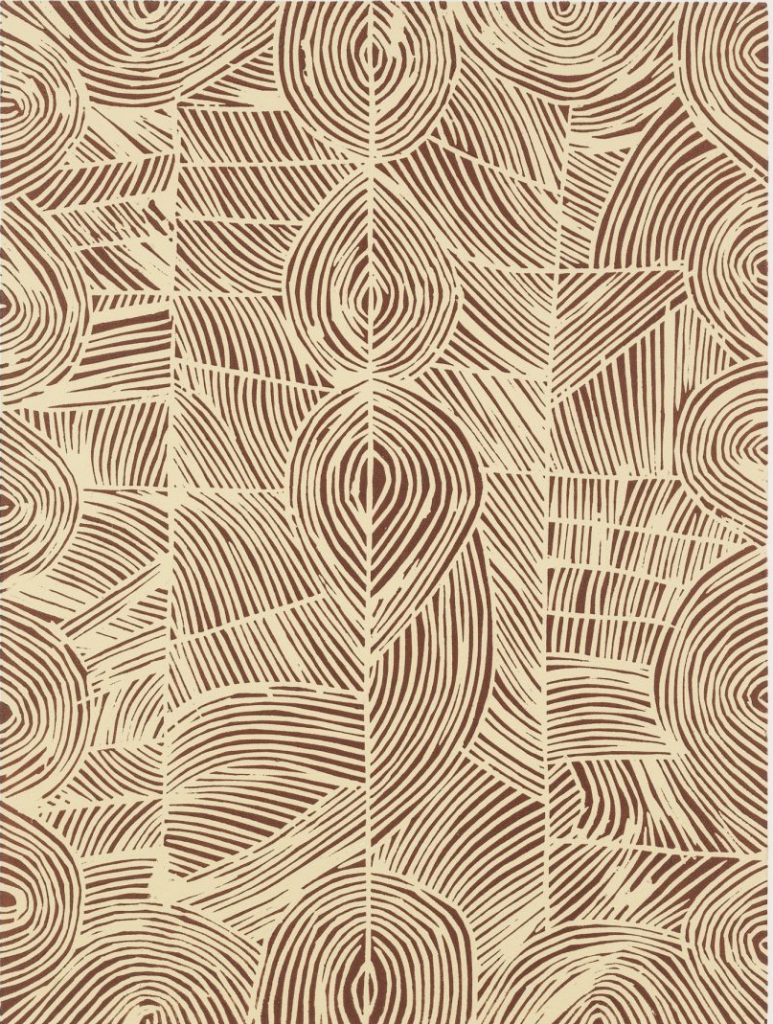 Paintings and Woodblock from the Western Australian Desert

Indigenous Australian people have lived in the remote deserts of Australia for tens of thousands of years. In the late 1960s, the Australian government moved several communities from the Western Desert region – primarily Pintupi, Luritja, Warlpiri and Arrernte peoples – to the Papunya settlement, which is located about 150 miles south of Alice Springs in the Northern Territory. Whilst a tradition of body and sand painting was prevalent – historically passing from generation to generation, down each distinct family line and depicted old stories, sacred imagery and transcendental visual codes – it was not until the first years of the 1970s that members of the community began to paint on to canvas in acrylic. In 1972 the Papunya Tula Artists Pty Ltd was officially founded as an artist cooperative, owned and operated by members of the community. The group’s work, often referred to simplistically as ‘dot painting’, has since been shown on almost every continent in the world with Papunya Tula Artists’ works in the collections of major public institutions globally.

This body of unique works – never previously shown outside of Australia – features paintings and woodcuts by some of the leading artists of the group today, which includes several women, attesting to the increasingly prominent role of female artists within the group.

Particular to this exhibition is a significant body of woodcarvings, to which technique the group was introduced in the 1990s by Chris Hodges (Director of Utopia Gallery, Sydney and representative of the PTA group). These works in particular speak of a direct link between the carving and scratching of trees, bark and wood in the landscape and the mark-making employed in creating the artworks. They also come from a period of time when the group was arguably less consciously aware of the increasing enthusiasm for decorative aboriginal work, nevertheless significant examples are held in the collection of the British Museum.

This exhibition, which has come as a highlight selection from Messums Wiltshire, represents a rare opportunity to see a body of works from the PTA group outside of Australia – pieces that speak to ancient traditions carried through time, representing both temporality and permanence, representation and experience.