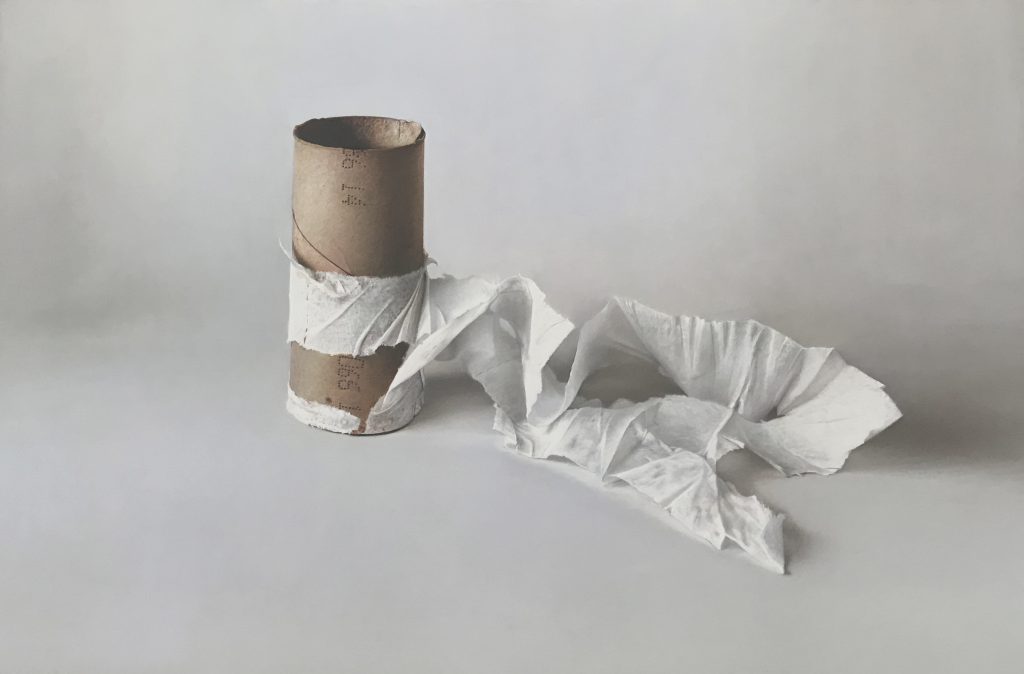 ANDREW HEMINGWAY
Sanctity in the Mundane

There is nothing too inferior or not worthy of being turned into a work of art according to Andrew Hemingway. Like the Dutch painters of the Golden Age or the Italian painter Giorgio Morandi, Hemingway finds inspiration in the ordinary fixtures of domestic life and turns them into pieces of visual poetry.

So it is with his latest series of 16 pictures of cardboard toilet roll interiors which appear almost anarchic as an artistic subject yet are translated by the immense skill and sensitivity of the artist into objects of beauty, personality – even dignity.

‘I want to make the idea of a thing more real than the thing itself,’ explains Hemingway. ‘Everybody has seen a toilet roll like this – except possibly the Queen. They represent an experience so universal and yet one only ever experienced in private. There is something poignant and dramatic in the way the cardboard rolls look in these pictures from how they are generally seen.’

They are also he says, ciphers for human beings and used in the same way that cylinders were used to denote the human frame in Cubist paintings. The tiny traces of white transparent tissue stuck to the cardboard are read instinctually by the viewer as clothes or hair, lending the works an emotional charge way beyond their prosaic subject matter.

Hemingway has been making the pictures of toilet rolls since 2013 and finished the last one this year, coinciding with the panic buying and scarcity of them that heralded the beginning of Lockdown. ‘It’s extraordinary how prescient the pictures have suddenly become!’ he says. ‘I was compelled to draw them as a series simply because I felt it was too difficult to tackle the whole thought process communicated in just one picture. They are my version of the façade of Rouen Cathedral which Monet painted again and again.’

The pictures are made using Hemingway’s signature drawing technique in which powdered pigments in pastel crayons are overlaid upon one another, much as an Impressionists laid on different colours to vibrant collective, effect.

Born in Yorkshire in 1955, Hemingway first attended Camberwell Art School before winning the prize for Landscape Painting at the Royal Academy Summer Exhibition in 1978.

He won scholarships to Florence, Rome and Norway and credits these experiences with having a profound impact on his work.  As well as Europe, he also travelled to Canada, Japan and Israel.

Although he has used oil, egg-tempera and watercolour in the past, now, his preferred material in pastel.

In 1984, Hemingway moved his family back to Yorkshire, where he still works. He has been represented by Messums for the last twenty years and is one of Britain leading realist artists.

‘I wanted to see if I could something new and explore the magical beauty of creating films of colour as Titian and the masters of the Italian Renaissance, did.’