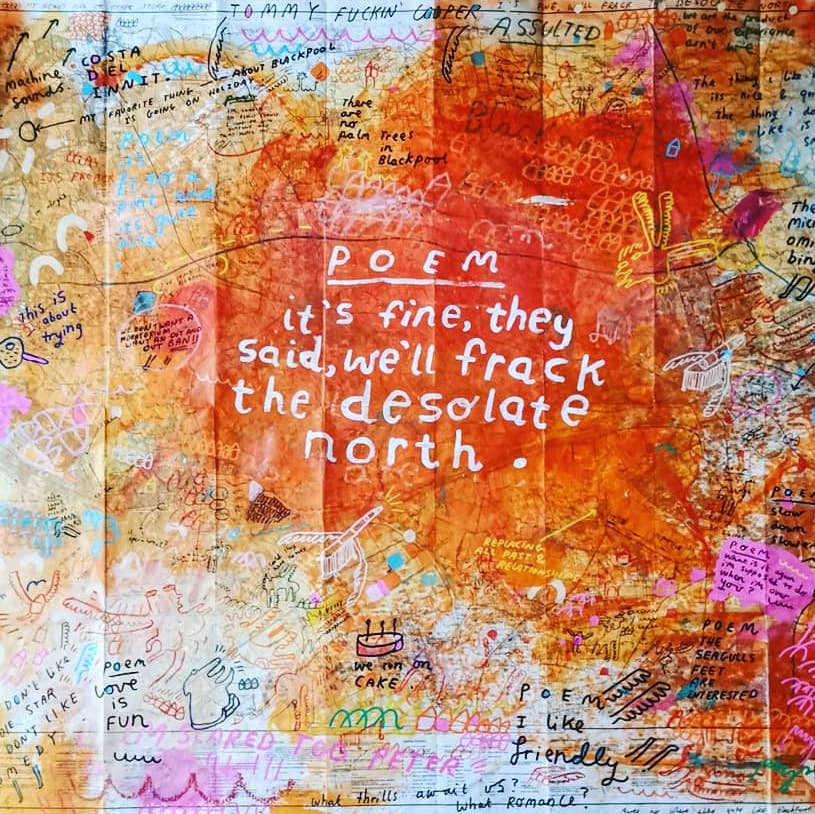 Gommie’s pictures are a testament to one of the most extraordinary years in British history. We have had the vote and these are the first responses from an artist at the coalface of an area that was once a Labour heartland.

Gommie started to make these pictures during one of the lowest ebbs of his life a couple of years ago when, with no permanent address, no studio and only a tent to sleep in, he felt compelled to start walking.

Hitching a lift from a friend to Dover he set off for the north of England but as he walked he started jotting down notes about his encounters with the people he met and noted their comments on the Ordnance Survey maps he was using to navigate his way. At the same time he kept up an upbeat dialogue on Instagram, but, warming to his venture he still had no money so he applied to the Arts Council for funding to continue it. They turned him down so instead he turned to his Instagram followers which were rapidly growing in number who supported him through crowd funding. Last October he won the Saatchi Art Prize for best newcomer and his work is now with Soho House Collection but this is his first project with Messums London.

Gommie’s works are testaments to the joys and tribulations of the people of all walks of life that he has met – their insights, wisdom and often, suffering which they have shared with him and which he has turned into iconic pictures of colour and life.

His work is not easy to categorise; it combines text-based art, land art, performance all of which can be enjoyed at Messums London at 6pm on February 8 when Gommie will hold a performance and share experiences from his findings.

Map 26 – They actually said that – (Duplicate Imported from WooCommerce)

Map 25 – No matter what happens