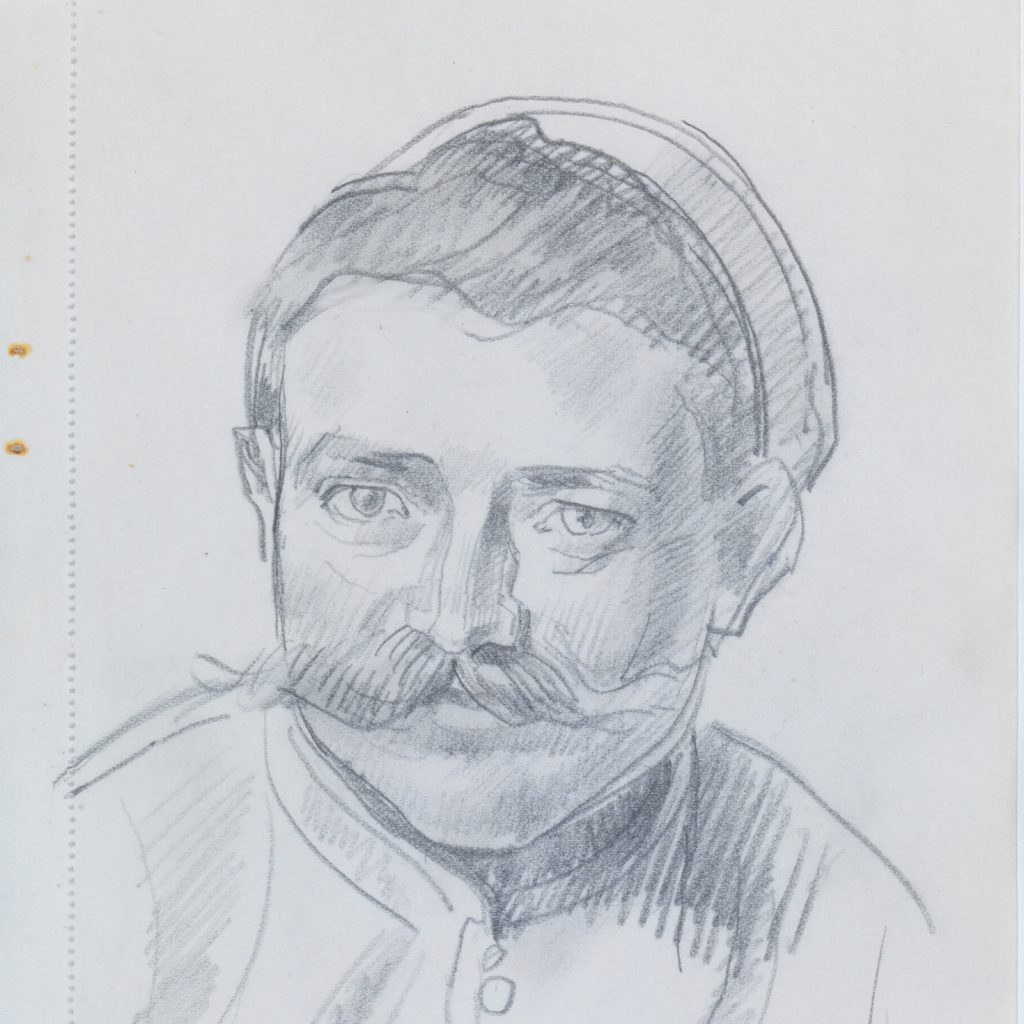 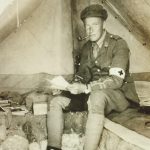 As representatives of the Henry Lamb Estate we are delighted to present a collection of oils and drawings by Henry Lamb from 1914 – 1921. The exhibition will go some way to telling the story of Lamb’s multifaceted experiences of war and how this nervous, sensitive, physically fragile artist come to be a front-line doctor in three different World War I campaigns – Salonika, Palestine and France. In the nine years before 1914, he had been a footloose experimental painter, frequenting Chelsea and the world of Augustus John, Paris, Brittany and Donegal. He was on the fringe of the Bloomsbury Group, friendly with Sickert at the start of the Camden Town Group, but essentially a cat who walked by himself and avoided organisations and classification.

It is hard with our knowledge of the full horror of what was to come in the following years, to peer through at the opening years of World War I. These drawings offer something of an insight into these moments. Lamb himself left at the beginning of November 1915 to return to Guy’s Hospital to complete his studies as a doctor. Kennedy had already left Fécamp in the summer and Lamb had ‘become horribly bored’ without his company. But mainly it was becoming clear that the War was not going to end soon and Lamb wanted to be more involved.

Along with these painfully insightful portraits and studies of Fecamp there are drawings from his time in Salonika which are quick sketches and studies of the landscape, remarkably different to his intense portraits from Fécamp in the previous year. These would appear later in more structured forms as the basis for a body of works recalling and recording the War from this far flung part of the front.

Lamb’s work as a surgeon was difficult and demanding, leaving little time or energy for drawing or painting. He requested to be an official war artist, and was recommended by both Robert Ross as early as February 1917 and Muirhead Bone’s brother James, the London editor of the Manchester Guardian. However, even with the additional support of Henry Tonks and Charles Aitken, this was not enough for the war office to release Lamb. As a doctor he was too valuable, and additionally, it was a slow-moving process; by the time he was appointed the war was over. The drawings made while in Palestine are predominantly detailed studies of the Palestinian landscape and local plants and flowers. His drawings of the Judaean Hills have an almost pre-Raphaelite intensity, occasionally punctuated by tents and camps – subtle reminders of the ongoing war, while the drawings of plants are reminiscent of analytical botanical illustration. In these drawings Lamb has shifted his focus away from the human experience of war, forming a stark contrast to the numerous portraits made earlier in the war at Fécamp. They are uncharacteristic of his work made before or after, perhaps serving as an antidote to the horror. The botanical studies do remerge later; both Irish Troops in the Judaean Hillsand Advanced Dressing Station at the Strumainclude detailed and precise vegetation.

After the war Lamb was decorated with the Military Cross, and he was commissioned by the British War Memorial Committee, created by the Ministry of Information, to produce a large painting as part of a scheme for a proposed national Hall of Remembrance, along with other Slade School painters, including Augustus John, Wyndham Lewis, Darsie Japp and David Bomberg. Spencer was also part of this group – he had written to Lamb the year before, about the inspiration he took from Salonika, revealing ‘I am a thousand times more determined to do something a thousand times greater than anything I have done before when I get home’ (the hall was never realised and the completed paintings passed into the ownership of the Imperial War Museum)

Sketch for figure in advance dressing station on the Struma, 1916 Z1a

Sketch for ‘Advance dressing station on the Struma, 1916’

Sketch for ‘Advance dressing station on the Struma, 1916’

Troops bathing on the Struma, 1917

Sketch of an officer Z29

Sketch for Irish Troops in the Judeaen Hills, 1919 W10

Sketch for Irish Troops in the Judeaen Hills, 1919 V22

Sketch for Irish Troops in the Judeaen Hills, 1919 W8