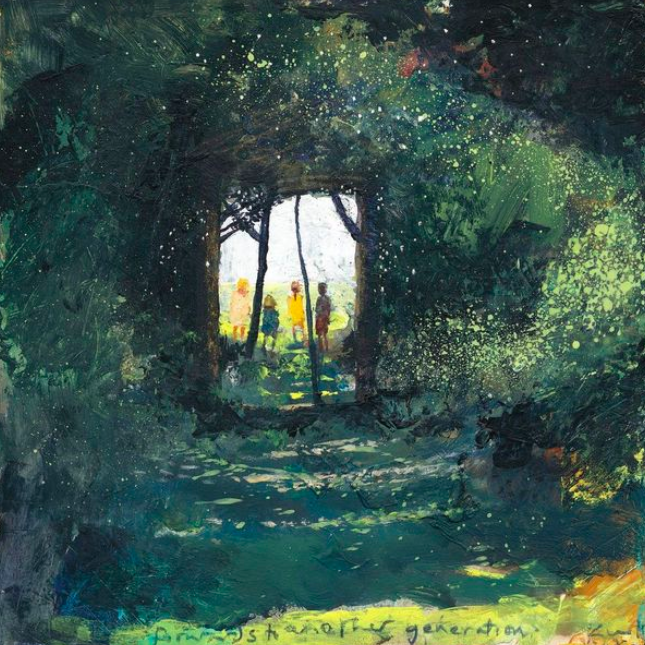 An exhibition of paintings by Kurt Jackson, one of Britain’s leading environmental landscape artists and campaigners, documents the spring of 2020 and the arcadia he found bursting into life immediately outside his front door in a remote part of west Cornwall during the challenging period of national lockdown.

The exhibition focuses on paintings of trees that he and his wife, Caroline, planted twenty years ago and that have, over time, formed hollow ‘greenways’ or paths in the interstices between the lines of planting, along which he walked every day from his house to his studio.

The tunnels, laced with the play of light and shade, are groves of wildflowers, insects and birds that Jackson celebrates in his paintings.

‘The tragedy of the beginning of the pandemic collided with one of the most magnificent springs I can remember,’ said Jackson. ‘Lots of people reassessed their immediate surroundings and Nature was a helping hand to get through those difficult times.’

‘There was a sudden dawning of absolute delight and real appreciation with this newly wooded habitat during the lockdown’ he added. ‘It was proof of nature’s health-giving potential, of mental well-being given by seeing that green light cascading down; hearing the bird song and seeing the understory of wildflowers.’

Jackson and his wife transformed the scrubland surrounding his house in St Just, Penwith by planting trees and trying to live in as sustainable way as possible. Through his painting, he has supported many environmental causes; he was artist in residence on the Greenpeace ship, Esperanza and at the Eden Project and he is an ambassador for Survival International and frequently works with Friends of the Earth.

His pictures frequently carry small commentaries on the scenes depicted and show a fascination particularly with the detail of plants and animals within an overall ecology.

Thirty paintings in this show trace the progression of the seasons, from spring to summer as campion flowers are replaced by nettles and wild strawberries.

The paintings, that have the characteristic delicacy and precision of all of Jackson’s work, distil the essence of a sweltering summer’s day, which is often best enjoyed hiding from the heat of the sun in the kinds of cool arbours portrayed.

The subtleties of greens of all hues; ash, beech, nettle are all observed with infinite sensitivity and most of the paintings show a light in the distance at the end of the green tunnels – suggesting they may be meditations on ways through more than just foliage.

‘Covid 19 will change everything, including art and what we think about art’ says Julian Spalding, former director of Glasgow Museums. ‘The lockdown has shown, for the first time in human history, that we can all work together, globally, for the protection of mankind. This collective response needs, somehow, to be transformed from a negative reaction into creative action. Kurt Jackson has been doing this all his life. That’s why his work will grow increasingly significant as new attitudes to art emerge after Covid 19.’