EXHIBITION: Kurt Jackson ‘The Stour: From the Source to the Sea’ 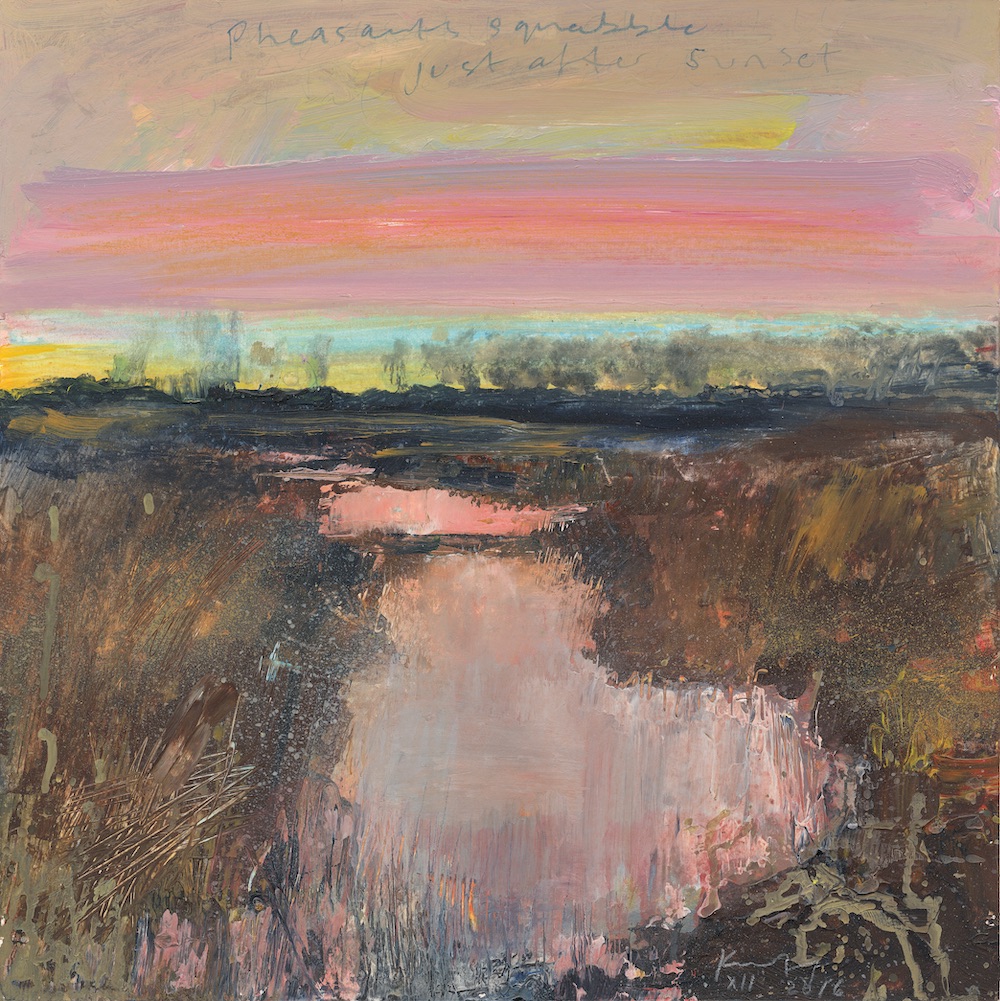 Kurt Jackson has for a long time been a champion of the environmental movement. Whilst his paintings, with their range of media and texture and their three dimensionality, are clear calls to experience the physicality of the world first hand – to get in there amongst it all, to realise that this landscape – so threatened as rivers so constantly are, is essential to life and to living. Like all the best landscape artists, Jackson helps us realise that nature isn’t something else, something distinct and different from us – it is a part of us. We’re all part of the river, and the river is part of us.

Kurt Jackson is an artist who has dedicated his career to exploring and recording our fragile landscape as it changes over time. This interest in change includes not only an awareness of the subtle gradations of light, mood and weather that makes him such a perceptive painter. He also possesses a passionate awareness of – and concern for – the more fundamental nature of humankind’s impact (for good and ill) upon the natural world: ecological evolution, variations in land use, habitat loss, conservation, preservation. David Boyd Haycock

For this exhibition – shown in two parts at both Messums London and Wiltshire galleries – Jackson traces the origins of the River Stour – ‘his fathers’ river’ – on the east coast of England and explores the relationship between life and death and flora and fauna, before turning to another river source: this time in the Southwest and the northern parts of the Cranborne Chase ecosystem where the River Nadder springs and begins its descent into Salisbury.

In his paintings – works which acknowledge areas of rich biodiversity in an attempt to warrant their preservation – Jackson has captured bucolic scenes such as those of the glinting flinty bed of the river, with its flowering flowing crowfoot; the watercress that provides cover for trout and native crayfish; and the caddis flies that dance on the surface of the water.

A celebration,’ as Jackson puts it, ‘not only of the chalk stream, this fragile English landscape that is stuffed with life, but also of all aspects of our life journey. This is a place of coincidence, crossed paths, rediscovery and return’.

Over the last five years he has followed the River Stour, tracing its journey from unassuming beginnings on Wratting Common in Cambridgeshire as it winds through the landscapes of Constable and Gainsborough towards Harwich where it emerges into the North Sea. It is the river he discovered through his father, the artist Peter Jackson who lived beside it for 30 years. Jackson returned to capture this unique landscape for this new body of paintings to be shown at Messums London.

His second river journey too has familial connections, following the course of the Fonthill Brook, a mere one-hundred yards from Messums Wilshire where these paintings will be shown. It was in Wiltshire – and between Fonthill Bishop and Fonthill Gifford – that Jackson’s maternal grandparents settled to raise a family before the war. The estate of which Messums Wiltshire is now a part, provided both a house and employment, and it was amongst the gentle sloping fields and around the Fonthill Lake that the artist’s mother and siblings took their first steps. Jackson describes the clear chalk stream of the Fonthill Brook that flows out of the lake (and later joins the languid Nadder at Tisbury) as ‘a glorious nature-filled watercourse, [and] a fragile precious habitat that deserves our continuing respect.’

Jackson’s practice involves both ‘plein air’ painting and studio work and embraces an extensive range of materials and techniques including mixed media, large canvases, printmaking and sculpture. For these exhibitions, painting on the shade of the riverbank, he has perfectly captured these two watercourses – a testament to the art of observation, as well as a celebration of – and dedication to – the natural environment and its vulnerability.

‘Along with the down lands and old woodlands these chalk streams are the jewels in South England’s crown of special habitats,’ he says. ‘Having flowed for millennia they remain as reservoirs of biodiversity. Turn over an immersed stone and a wealth of aquatic life is exposed; shellfish, caddis fly larvae and shrimps all racing for cover. Linger on the banks and the range of flowering plants is blatant – big showy kingcups and sweet-smelling frothy meadow sweet.’

Cowslips, dandelions and skylarks, between two fields the Stour is born, 2018

A source of the Stour, Weston Colville, duckweed and newts, 2018

Cowslips and dandelions from the source of the Stour, West Wickham, 2018

Flowers from the Stour source, 2018

A meander on the Stour one evening, 2017

Cavendish, the Stour flowing under the willows, 2017

The last of her kind, The John Constable, the Stour lighter, 2018

Bluebells, campions and dandelions from the banks of the Stour, 2016

From the banks of the winter Stour, Nayland, 2016

The young Stour snaking her way through the reeds as the sun sinks behind me, 2016

Stoke by Nayland church lit up on the skyline, 2016

The Stour’s morning flock of waders, 2016

Towards Harwich and Felixstowe at dusk at low water, 2018

Manningtree, a wild rose bush, a flock of geese, a Stour meander, 2016

Wrabness, flocks of lapwings and the bare bones of a barge, 2016

Into the estuary, bright morning from Harwich, 2018

The Stour meets the North Sea under a rainbow, 2018

This is where the Stour goes, journey’s end, rain, sun and gales, 2018

Dad’s Paleolithic hand axe from the banks of the Stour, 2016

Scarf and hat, Dad painting in the cold winds on Stutton Point, 2016