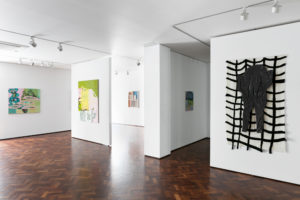 on Surface showcases the work of a group of emerging contemporary artists who share certain affinities and approaches – Anna Brass, David Cooper, Laurence Grave and Henry Ward – together with works from Messums’ artist and selector of the exhibition, Tom Robinson.

While the individual practices of these artists are diverse, they are unified in their dynamic approach to materials, processes and imagery. Robinson references this commonality as a force best described as ‘charge’.

Anna Brass has a large studio in Norwich, high up in the Outpost Studios building in Anglia Square. Currently under threat of demolition and subsequent development, Brass has played an active role in the campaign to protect the complex. Brass’ studio is expansive and her work is everywhere – on walls, suspended from the ceiling, arranged across the floor – along with many, many other objects and materials that might be work and are being reworked and cannibalised, or stored for future work. There is so much to look at, it’s exhilarating. Slowly, the threads that bind her constructions, paintings and textiles become apparent. They are bound by a woven structure of experience and research that has been building towards the making of a film, a project of both science fiction and a consideration of the 14th-century emergence of capitalism.

Many of the things that Brass has been making will play a role as props and characters in the film, but they also function as objects in their own right, ready to play other parts in other contexts. Brass has been developing this body of work since 2018. It found its starting point in Italy, with a trip to Florence and Frances Stonor Saunders’ Hawkwood: Diabolical Englishman, an account of the 14th-century mercenary John Hawkwood. Eclectic visual and literary references chime through the works – Renaissance masonry, the works of Giotto and Giorgio de Chirico, Byzantine mosaics, pilgrim badges. Pattern and person become indistinguishable, as if the boundaries between objects and people dissolve – a flint becomes sentient, at once ancient and fully present. It doesn’t matter how precisely these objects lead you to the complex sources that connect them. In their eclectic brilliance, they signal a connection across time between artists and materials that each element articulates, in chorus or alone.

“One of the characteristics of all of the works in the exhibition is a quality of aliveness. I see this aliveness stemming from the ability to harness something vital and control it. The force has been carried through into an organised structure.”
Tom Robinson 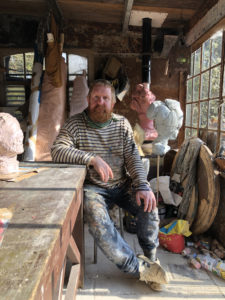 Suffolk, early summer. The garden path leading to David Cooper’s studio is idyllic – worth mentioning only because of the radical shift in context as you step into his studio. A series of casts across a table resemble body parts. More exactly, they are sculptures that look like forms that appear in paintings and reference body parts. Something rises from the table in a glossy and disturbing pink that looks like a section of one of Francis Bacon’s Three Studies for Figures at the Base of a Crucifixion, 1944. Cooper’s objects are fascinating, disturbing and wonderful all at once. In recent canvases, vertical black and white striations echo the vertical lines in Bacon’s early work, a veil that both obscures and reveals. This device was first used by Cooper in a series of drawings of 2012, two of which are shown here. In one the figure, described as a head attached by something like a ball joint to a box-like torso, is collaged on to the striped ground. In the other, the outline of head and torso carries the stripes, confusing figure and ground. Entirely anonymous and unknown, these images are deceptively titled Info Drawing. Other muses can also be seen in the work – Alberto Giacometti, Lynn Chadwick, Elisabeth Frink – artists who have fed Cooper’s interest in visceral, skeletal forms. Cooper knows how to build a structure, drawing on the practical techniques of his early career in fashion. His works are cast, assembled, carved and reformed from a great range of materials, including but not limited to; clay, polystyrene, horsehair, modroc, tape, rubber, bitumen and tape. With the addition of broken parts and other objects to hand, they come in to their own, seductive and unsettling in equal measure. Paintings and objects alike make us think about what lies beneath the surface, what psychological states are held within.

The Info Drawing No.1

The Info Drawing No.2

Laurence Grave started painting in 2008, following a move from Paris to Berlin. Her work has consistently experimented with form, ground and space, using a variety of canvas shapes and tearing and cutting through canvas and paper to reveal and build spaces within. At the heart of this exhibition, her work perhaps represents all the playful complexity of the possibilities of surface. Recent paintings are disarmingly direct. The work turned over, the stretcher becomes a protagonist, rather than support. Blocks of colour play against the structure so that suggested space butts up against the real depth and solidity. In Crabby 2022, Grave takes the rondo form and folds it in on itself, the two sides of the canvas detached to meet in the middle. The work feels exposed as if undressed. This painting is intriguing, the mind drawn to the core relationship between support and canvas and the eye to the composition that is partially revealed, the bright bands of colour that have been poured on the back. Family Portrait I and IV address the idea of portrait as a convention of orientation and proportion (a vertical canvas is traditionally described as ‘portrait’, a horizontal one as ‘landscape’) while also leading us to think about the portrait as likeness, capturing networks of relationship and memory. Family Portrait I is composed of a sequence of canvases of the same size, a composite form in which some are some front-facing, some reversed. Our reading of their colour surfaces is animated by fluctuating depth and the uneven white division of the loose canvas edge, the disciplined colour is disrupted. Family Portrait IV is even more complex, turned canvases nesting within the support of a larger canvas. A wonderful thing to look at and yet this work turns its back on us, as if to acknowledge that we can look, but in its self-containment, it doesn’t need us to do so. 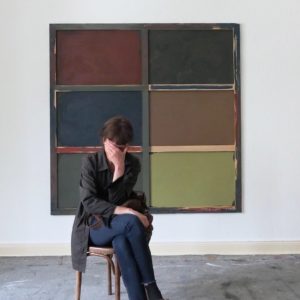 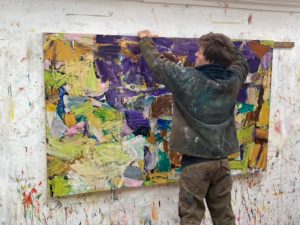 In Tom Robinson’s studio there are a number of paintings at various stages of completion. We talk about which are finished and which works are still in progress. Robinson describes a moment in the construction of a painting in which the sense of agency shifts. Having taken it so far, he becomes attuned to what ‘the painting wants to do next’. To bring the painting to its final form involves a willingness on Robinson’s part to make decisions that he feels ‘completely expose you to the viewer’ and in doing so risk it all going wrong to make it finally right. Distinct from Robinson’s colour paintings on panel, the canvases shown here come from a practice that began in the spring of 2021 as he realised that he wanted to make much bigger drawings. The large un-stretched canvases offered the immediacy of simply putting them up and starting work. The wall on which they hang offers resistance so that paint can be scraped off, in all of these works there is a movement rather than a linear progression. Sometimes the making is undone, something must be removed and from that something else emerges. These drawings take the grammar of early American cartoon strips and elements of figure and hands can still be deciphered, reminiscent of the chaotic action of the source material. Amidst the play of gesture and incident, the depth of pigment and the movement of light, the subject becomes lost in all the things the painting does. 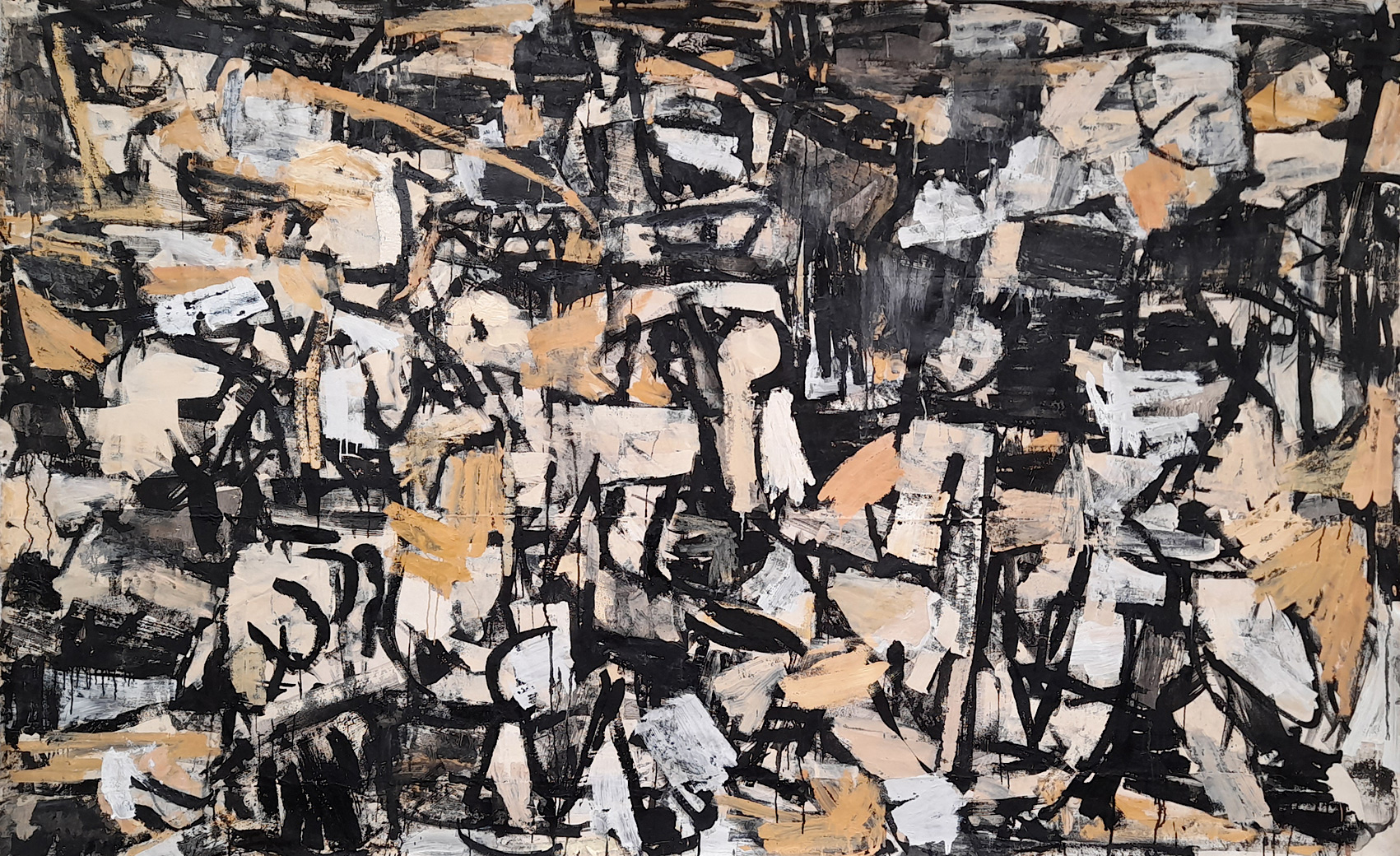 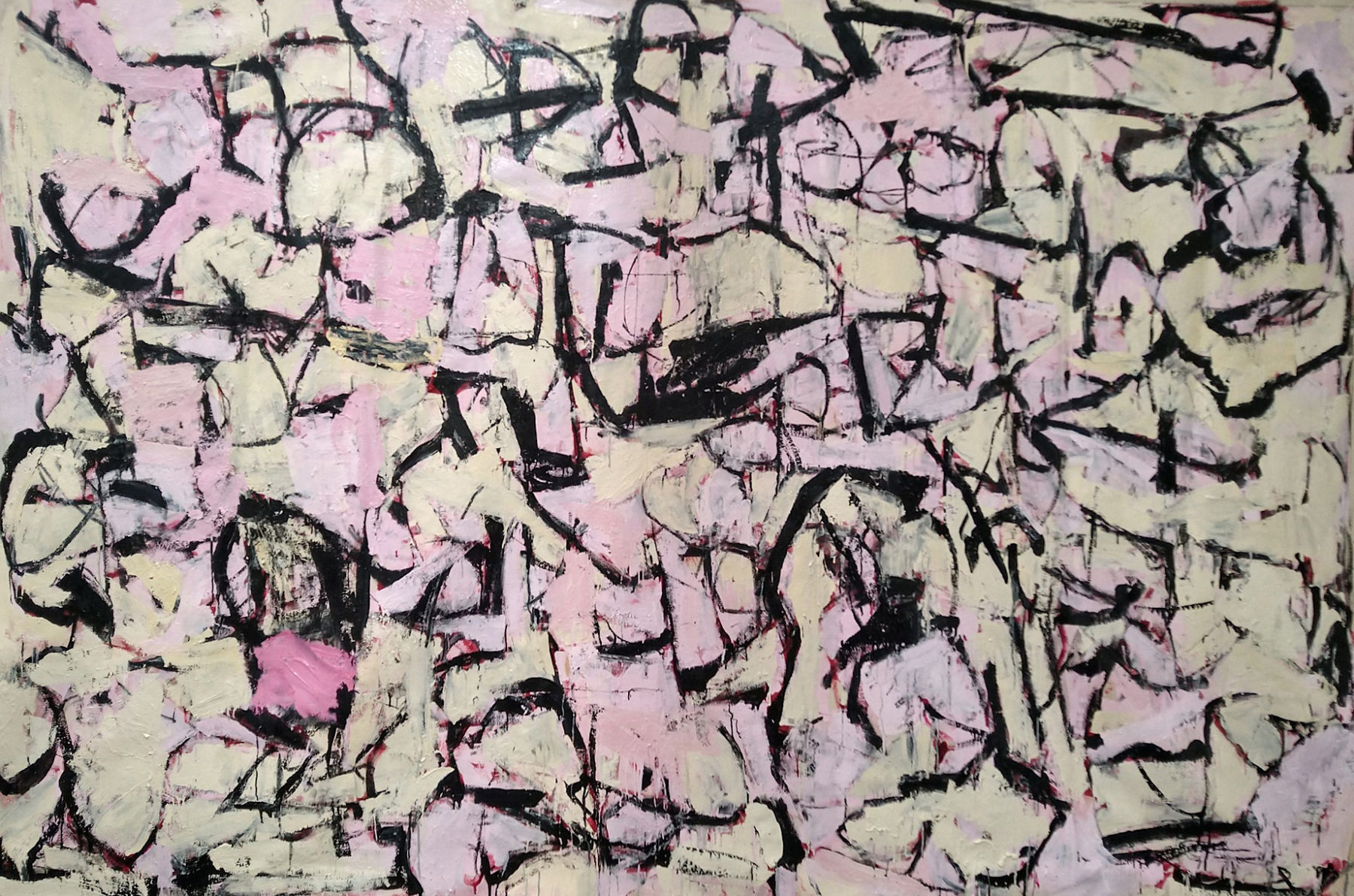 Parallel to Robinson, Henry Ward similarly describes the way in which paintings develop and find resolution, ‘the painting is finding out what it wants to be’. In Ward’s work, gorgeous colour and solid forms swoop and collide. Flat pigment and veils of layered colour create a characteristic spatial complexity, conjuring depth you could fall in to before throwing you back to the surface. These compositions flirt at the very edge of legibility. Loopy, tangled lines suggest both organic growth and a form of writing. Other repeated motifs, such as the black outlined pointed forms across the bottom section of Fold, 2021, tease you with a sense of recognition. Forms from a painted scenario signal back to the stuff of our lives, an ‘echo of thingness’ that feeds a sense of narrative. Ward works in three places, significant for the separation and yet interconnectivity of the activities that happen in each. At the kitchen table sculptures are made from discarded things found on walks – no glue or tape, just the found elements assembled. These composite objects inform the great volume of small-scale drawings made in his shed. They are a daily discipline and some, in turn, feed the paintings made in the studio. The drawings are echoed in the separate sheets pasted on to the canvas of Sink 2021. Ward started collaging elements on to canvas in the 1990s and returned to the process 20 years later. These composites combine the idea of a graphic sheet, edges still visible, incorporated within an encompassing composition. Page-like, they form a sequence which suggests they might be read. 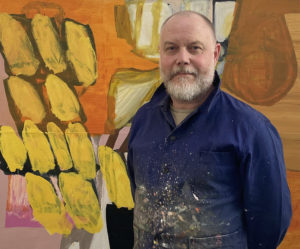 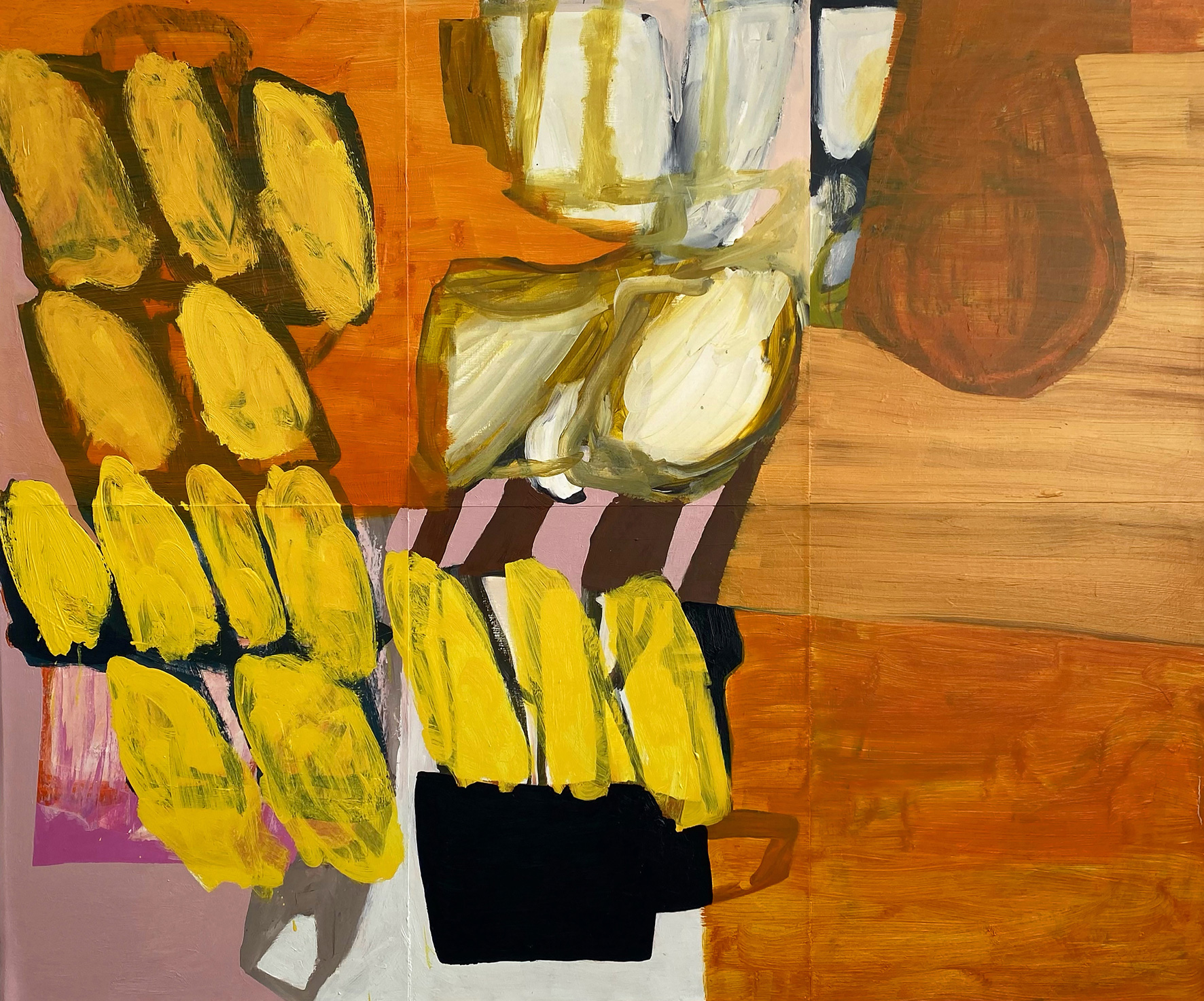 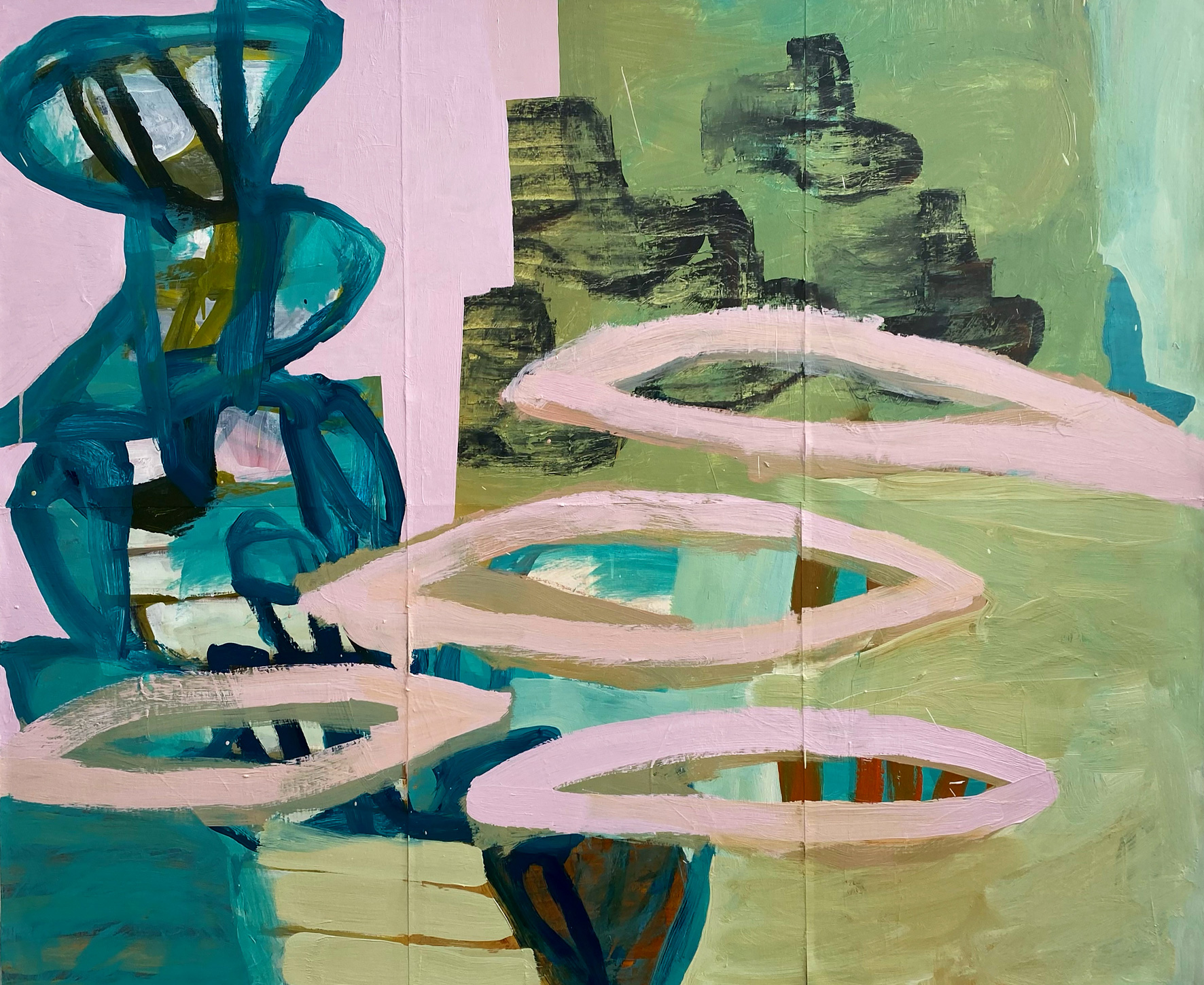 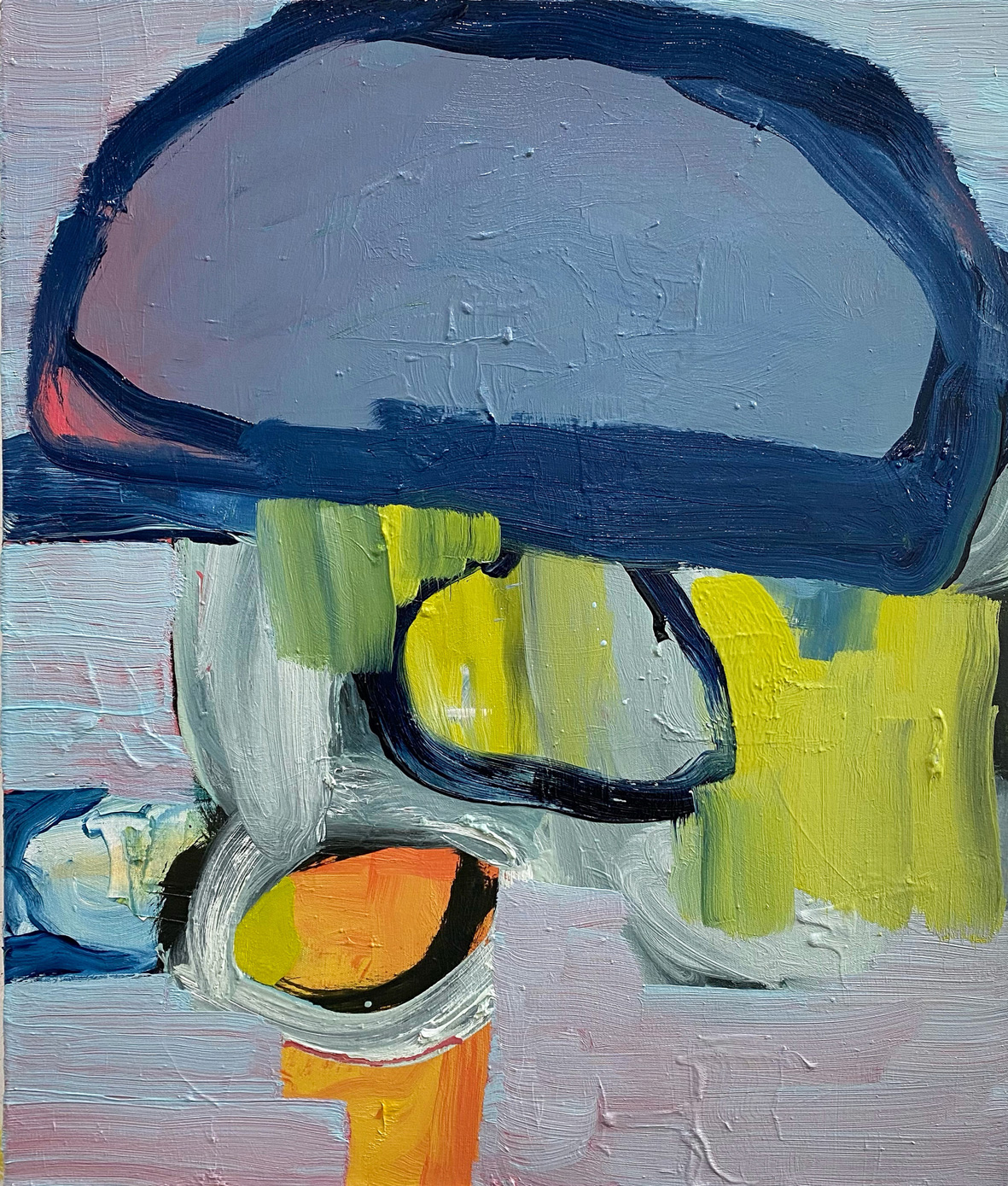 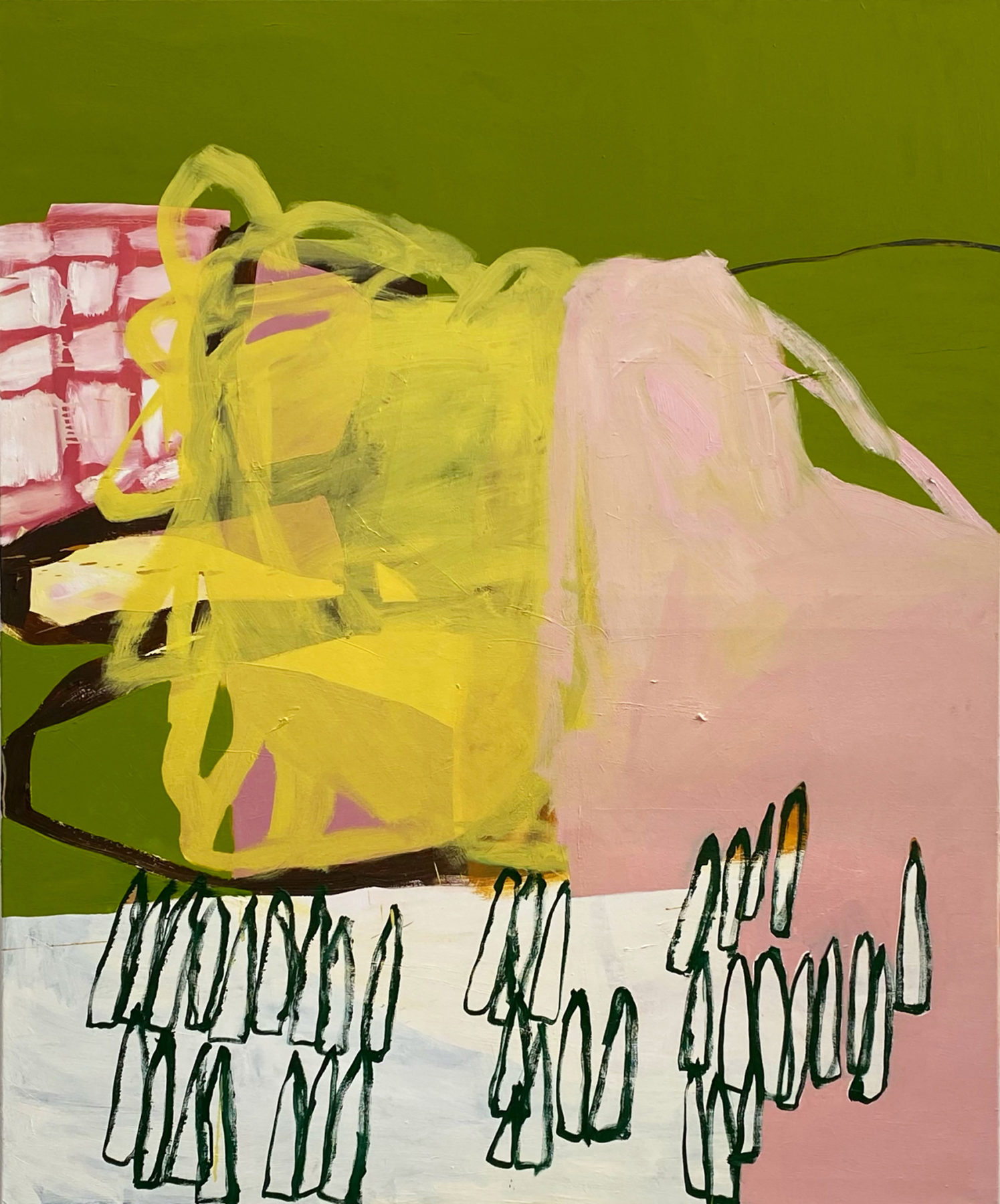