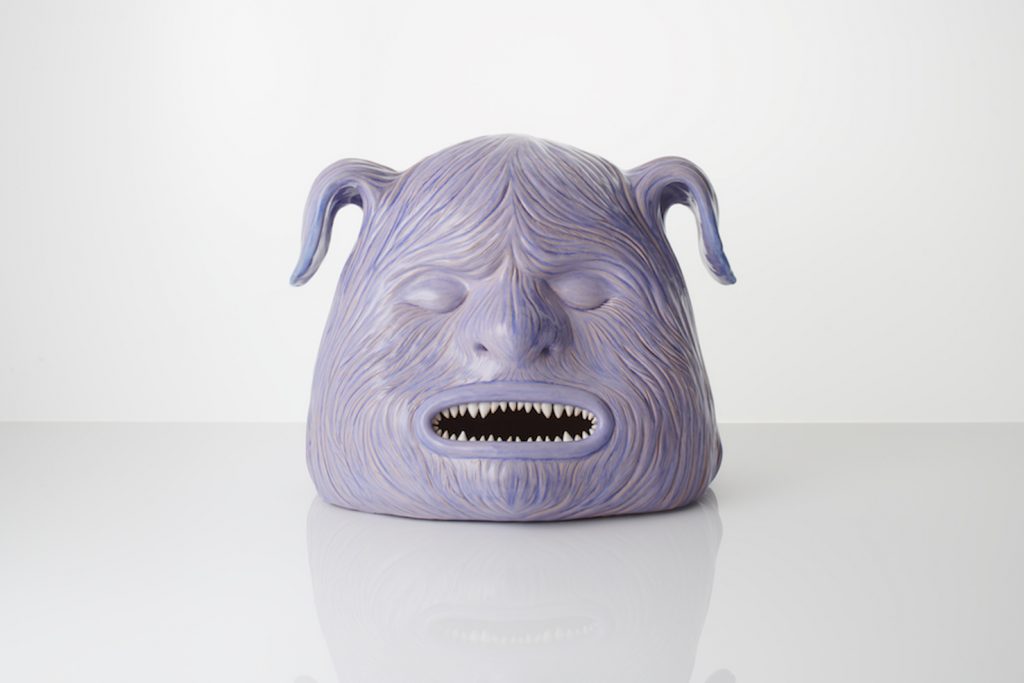 Danish artist Malene Hartmann Rasmussen works with figurative narrative sculpture and installation, creating work from individual hand-modelled ceramics and found objects. She is part of a vanguard of artists who choose not to define themselves by discipline or craft but instead blur the boundaries between Applied Art, Design and Fine Art, with exceptional hand-craftsmanship at its core.

This exhibition is a chance to preview a new body of work that will be the highlight of Beyond the Vessel at the Koç Foundation’s gallery, Meşher, Istanbul taking place during the Biennale in September 2019 and curatorial director Catherine Milner will introduce the exhibition and the accompanying catalogue for the launch on Tuesday 16 July.

Reflecting her Danish ancestry and the tales of northern European folklore Hartmann Rasmussen’s work is a metaphor for the relationships of her past – both with her family and the adolescence she left behind. The brightness, playfulness and immediate visual appeal belies a darker narrative where reality and daydreams are merged.The installation deals with ideas of worship, animism, ritual and the supernatural as well as ghosts.  The title of the installation is Fantasma – the Spanish word for ghosts – and the works reflect the time honoured use by human beings of figurative sculpture as talismanic objects to help deal with feelings such as fear, misery, anger, lunacy and grief.

Hartmann Rasmussen cites her greatest influence as her childhood – one that involved an alcoholic father and a mother who suffered from bipolar disorder and was regularly hospitalised. “It is not specific tales from Scandinavia but more the different sides of human nature and the creatures that represent these that interest me”, she says. “In some of the stories I have read and I remember from my childhood you have to be on good terms with the trolls and other creatures then they will help you in times of trouble. Often when people help the trolls with something, the trolls then pay for the service with gold. If you don’t keep your promise the gold turns to rocks… I find the magical aspect of that kind of narrative, fascinating.”

Much of her inspiration comes from the books she read as a child too. “When researching my recent installation Troldeskoven (In the Troll Wood) I got hold of some old books from an antiquarian bookseller with stories and sayings told for generations from mother to child in rural Denmark. The stories revolve around trolls and subterranean people on the island of Bornholm – the island I lived on for three years while studying ceramics – and some locals still believe in them. In the daytime the trolls live inside rocks or inside tumuli; the grassy mounds of earth raised over Viking graves that are dotted all over the landscape. At night the grass and soil rise up on glowing poles forming a roof. Inside you see the trolls dance and drink, and if they invite you in to drink with them, all the soil and grass will fall down and bury you inside forever. The Danish word ‘bjergtage’ meaning ‘being taken by the mountain’, originates from these stories. ‘Bjergtage’ is the Danish word for bedazzle. The strong bond between the myth and language is something I find fascinating.”

This new body of work – her first to be on public exhibition since she was Ceramics Resident Artist at the V&A in 2018 – is inspired by Danish frescos called kalkmalerier, that depict demons and fabeldyr or fantastical creatures found in Danish churches dating from the high and late middle ages.

‘I love the naivety of them’ says Hartmann Rasmussen, ‘there is no perspective and the dimensions are all wrong, but they can be very elaborate and detailed’. Some figures such as Violet Sleep reflect the Danish idea of ‘Hellmouth’ the entrance to hell, which appears in churches in the shape of a monster with an enormous mouth and teeth.

There are also fantastical creatures such as Sciapod; a strange being that feeds on people’s heads that has one large foot that it uses for shade as it lives in the desert. A key sculpture in the show is the biggest that Hartmann Rasmussen has ever made; a tall, totem-like sculpture of stacked beasts.

‘I am fascinated by the use of magic in the form of transformation, spells, offerings and sacred ritual objects and take in some of those ideas in my work in general.’