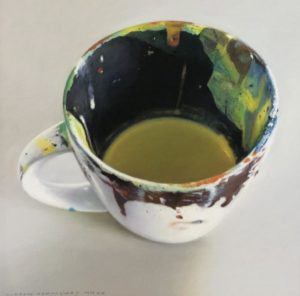 From his studio in an old schoolhouse in North Yorkshire Andrew Hemingway has quietly become one of the most remarkable artists working in the tradition of still life painting. Using soft chalk pastels, he brings a visual language learnt from the Dutch old masters into contemporary life. The rare collection of still lives at Messums Yorkshire are a celebration of overlooked objects and unremarked beauty, turning the ordinary ephemera of everyday life into pieces of visual poetry.

Andrew was born in Yorkshire in 1955. He was drawing and painting from an early age, but it wasn’t until he was 19 that he considered a career as an artist. He started at Barnsley Art School and a year later set out for London to read Fine Art and History of Art at Camberwell School of Art. At Camberwell he seemed already a fully formed artist- with a formidable work ethic he was even then completely uninterested in passing trends and fashions. He won scholarships to travel to Florence, Rome and Norway, which had a profound impact on his practice. In the late 70s and early 80s Hemingway stayed in London, working as an artist and teaching part time. He travelled more, to Canada, Japan and Israel. In 1984 he returned to his native Yorkshire and moved into an old schoolhouse where he is still working today.

Until now Hemingway’s preferred mediums had been egg tempera and watercolour, but in the 90s a chance encounter with an old box of chalk pastels and a sample of pastel paper sparked a turning point in his practice.

‘I wanted to see if I could do something new and explore the magical beauty of creating films of colour as Titian and the masters of the Italian Renaissance, did.’

It is easy to forget we are looking at pastel- the layers of powdered pigments and pastel crayons bear more resemblance to the Dutch old masters than Degas’ pastels. The pictures are often labelled as ‘hyperrealist’ and he lays down what he sees to paper with remarkable precision. Yet there is a depth and complexity of colour and light that goes beyond a photographic description.

Soft, floury bread in a crackly paper bag, shiny cardboard packaging, even a small plastic lid gain a gravity and timelessness under his gaze. Nothing is too inferior for his attention; a silver salt cellar and waxy flowers are treated with the same careful observation as a cardboard box. He returns again and again to the same objects. We can see a kinship with the Italian painter Giorgio Morandi, and these objects become like old friends or familiar faces.

Each scene is suffused in soft light; the clear daylight of Vermeer or van Eyck, shining here on the ordinary fixtures of life in the 21st Century. It bounces around the picture, off glossy silver, polished wood, metallic cardboard and tarnished metal, transforming the most unassuming objects.

‘Every new angle, every change in light reveals a seemingly endless world to explore. I paint them until l have sucked all the marrow from their bones, until I have said all that can be said about a subject. And when I am tired of it then I will stop. But not until then.’