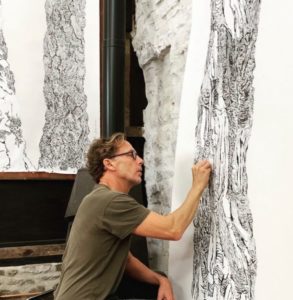 The debut exhibition of fashion-designer-turned artist Graeme Black. With a distinguished career behind him working at the highest level for Georgio Armani, Salvatore Ferragamo and Hugo Boss, he embarked on a new career in 2016 leaving London for the Yorkshire Dales to set up a studio in a converted 18th century cattle barn overlooking spectacular views of Upper Wensleydale. This exhibition is his response to his new surroundings.

The show focused on richly textured studies of the trees near Black’s home and on the forest land he is rewilding. Based on close, year-round observation, Black’s large-scale studies of trunks, branches, bark, moss and lichen on a background of raw canvas in different seasons are simultaneously abstract and naturalistic, epic and intimate, monumental and warm.

The gallery space is being redesigned to create a warm environment to offer visitors an immersive experience inspired by the forests near where Black lives. We are delighted that the internationally renowned Yorkshire furniture craftsmen Robert Thompson’s (otherwise known as the Mouseman of Kilburn) will be providing a range of iconic classic pieces from the 1920s and 1930s as well as a specially commissioned new piece – a burr top table designed for Graeme Black’s exhibition, bringing a modern twist to work by Yorkshire’s exceptional craftsmen. There will also be a number of unique bowls and trays made from the same rare 400 year old burr oak felled near Kirby Lonsdale in Cumbria, highly prized for its swirling, irregular patterns within the grain. It is over 50 years since Robert Thompson’s have acquired a burr oak of this outstanding quality.

Graeme Black’s paintings come from a life of looking for ways to connect what he sees with what he feels, the materiality of objects seen with the sensations of forms experienced. Since 2016 he has lived permanently in the North Yorkshire Dales, and slowly ironed out the man made damages to part of the landscape returning it gradually to nature, rewilding farmland and reintroducing trees. At the same time he took up again the painting that he had left behind as a student in Edinburgh renewing with the intensity of time lost and finding his subject in the trunks and leaves surrounding his home. His art practice in many ways has become a visual paean for a personal re-engagement with nature and connecting with wider sensibilities.

The works begin with walks through the broadleaf woods and open fells surrounding his home, looking at the trees and watching them change through weather and seasons. Back in the studio he closes in on the trunks and branches, cropping out the roots and leaves. The trees are richly textured while the space around them is left as raw canvas. He paints with a palette knife, applying layers and layers of impasto paint. He began with a naturalistic approach but has become more playful and instinctive, drawing colours from the bark, mosses and lichen. Often, he turns the canvas on its side so the tree lies horizontally. Here they begin to shake off the clear references to trees, becoming more like abstract forms and taking on guises of landscape.

Greame Black was born and raised in Angus on the east coast of Scotland and studied at the Edinburgh College of Art. He spent many years working in fashion, working for John Galliano, Giorgio Armani and Salvatore Ferragamo. Having lived in London and Italy and worked in China, Graeme settled in North Yorkshire, swapping fashion seasons for real seasons. He began a project of rewilding and at the same time made the commitment to focus on his painting. After years of travel he was staying still and his paintings reflect this time spent looking and slow, careful observation of nature.