“Modern geologists refer to the stratigraphic archive of the Earth as ‘the rock record’; nineteenth-century geologists spoke of it as ‘The Great Stone-Book’. In this unique project, Laurence Edwards has created a new kind of stone book: an extraordinary double-archive – told in bronze and told in story – of a generation and a community that is now close to disappearing.”   Robert Macfarlane (2019)

In 2018 the sculptor Laurence Edwards was commissioned by Doncaster Council, with money raised through a crowd funding campaign, for a sculpture commemorating the mining history of Doncaster.

For several months Laurence Edwards toured the pubs, clubs and community halls of the Doncaster region, speaking to miners and mining families in the town and its surrounding villages. Then he began a remarkable process, positioned somewhere between oral history and performance art. He would meet up to three miners a day, and with each person would sit for two hours, modelling their heads in buttery yellow wax, while talking with them and drawing out their stories. Each of these conversations was recorded, resulting in a film that chronicles the emergence of a portrait in real time as well as the life story of a miner.

Earlier this year, A Rich Seam was installed next to the Frenchgate centre in the town centre. The figure of a ‘listening miner’ stands between two 20 tonne pieces of York Stone, quarried in Huddersfield, and bronze faces of individual miners sit in hand made crevices, like a seam or ‘book of coal’ carved into the giant rock. 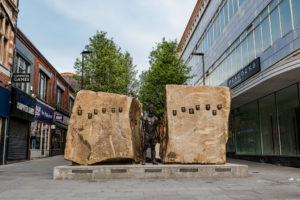 Laurence Edwards is renowned for the visceral nature of his sculptures, which artfully combine the figure with landscape, presenting us with characters that are inextricably linked to the earth. For A Rich Seam, he has adapted his approach in order to fully explore subjects that are embedded both in the local community and its geography. On the surface, in sculpting the heads of 40 Doncaster miners in miniature, he has produced some of his most literal portrait work. Each of the heads, created in wax from an initial two-hour long live ‘consultation’, is an accurate likeness of the individual sitter: a feat in itself given the time constraints of the project…

The Rise and Fall of The Doncaster Coalfield

“In that pleasant district of merry England, which is watered by the River Don, there extended in ancient times a large forest, covering the greater part of the beautiful hills and valleys which lie between Sheffield and the pleasant town of Doncaster.”
The above quote was written by Sir Walter Scott and published in his novel Ivanhoe in 1820. However, unbeknown to Sir Walter Scott, buried beneath his ‘beautiful hills and valleys’ lay a rich seam of coal, which was destined to change the face of the Yorkshire town of Doncaster and its surrounding villages – a local coal mining industry whose dramatic rise at the start of the 20th Century and an equally dramatic contraction at the end of it, came to dominate the town for around 100 years…

I grew up in a coal-mining country. Collieries were the highest structures around: the headstocks with their spinning wheels, the non-stop chunters of the winding engines. Power station cooling-towers made their own weather. Nodding donkeys pumped drifts dry. Slagheaps leaked black streams, tracked with tyre-marks. I had a strong sense as a child of knowing only one storey of the landscape, walking the surface above an invisible underworld of tunnels and shafts that ran for thousands of miles… 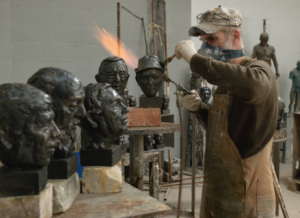 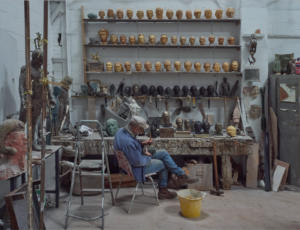 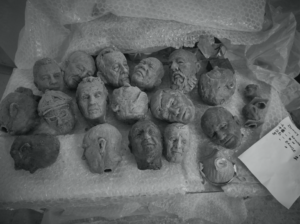