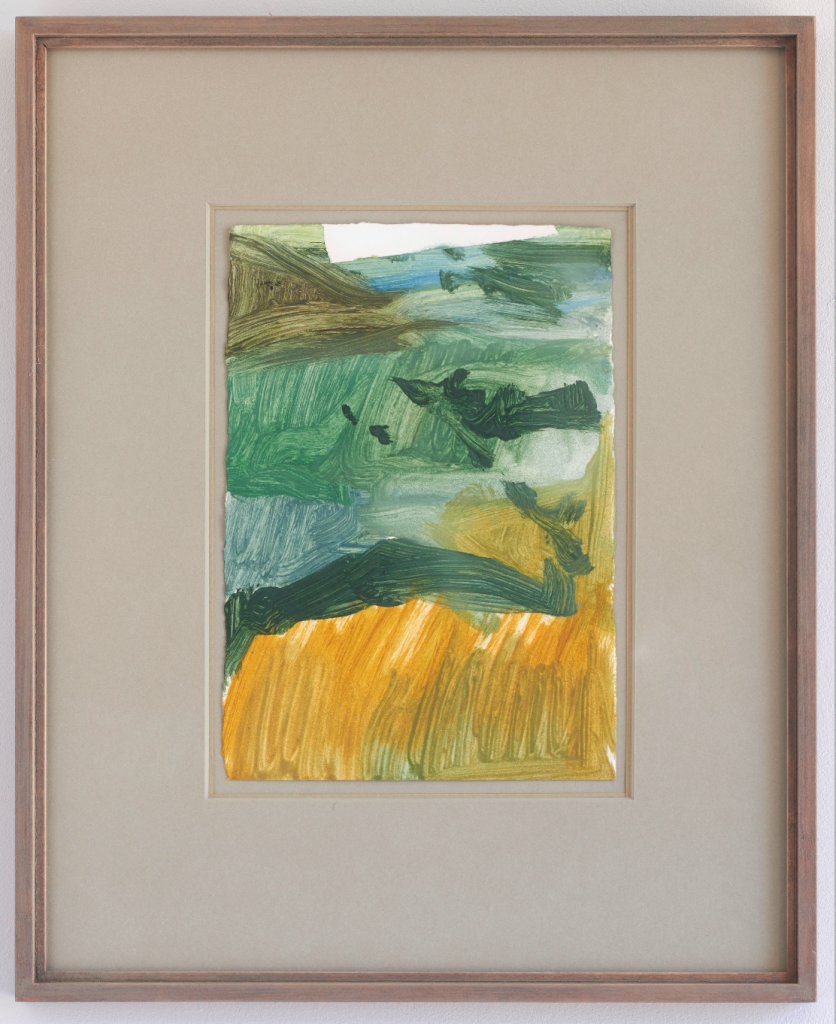 Brought up amongst the groves and vineyards of Faedis in northern Italy, the son of an architect and winemaker, Francesco Poiana has exchanged the alluvial plains and terraces of the Mediterranean for the wild and open chalk downs of Wiltshire.

Francesco joined our emerging talents programming following his masters degree at Central St Martin’s art college in London in 2019. Later that summer he was invited to Wiltshire to spend time in the landscape surrounding Messums. It was a culmination for him of a reverse Grand Tour, that saw him trace a path from Italy to the landscape from which so many of the most legendary tours started. His interest however was in a connection to the landscape far more ancient; in particular he has been taken by the area around Cranborne Chase with its striations and lush gradations of green and the Bronze Age barrow of Win Green that stands high on a ridge above it.

Using a mixture of oil on paper and print making techniques he explores the mystery and romance of one of Britain’s most historically significant and beautiful quarters. In conversation with head curator Catherine Milner, Francesco discusses his inspiration,

“My three favourite spots of landscape in Wiltshire are the top of Win Green, Fonthill Lake and the view from a farm high above the plain rising up from Messums Wiltshire.  I have always loved the landscape paintings of Cozens, Turner and Thomas Jones, who came on the Grand Tour to Italy and in many ways I have felt I am now doing the reverse journey as an Italian, travelling around England. I first discovered their work when I was studying at the Art Academy in Rome. They made their pictures in one sitting and their paintings are very immediate and that attracted me. Importantly for me, they also elevated watercolours from being just sketchy side shows to being stand alone art works in their own right.

A major influence on me has also been JM Whistler. In a diary of Whistler’s, I found his recipe to make oils look as if they are made of watercolour and some of the landscapes I did of Wiltshire use this method. Oils by Whistler are very fluid and liquid and he made them using varnish made of the resin of a copal tree, mixed with oil paints which is something I also do – though using a rather cheaper equivalent!

What impressed me most about the landscape of the Wiltshire is its order and geometry. It is casual but organised; smooth, with no high mountains or deep valleys,  but very soft and gentle. It reminds me of Tuscany without the Cypress trees and with more fields. It also reminds of a Sean Scully painting – it’s a landscape made up of geometrical colour in which the hedges, houses and farms play as much a part as the fields. In many ways, it is already a drawing and the artist just has to finish the process”.

Walking Inside Out Pencil Sketch #2