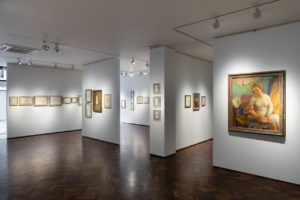 Henry Lamb was born in Adelaide, Australia in 1883 shortly before his father moved the family to Manchester having taken a post in the Mathematics department of Manchester University. He grew up in Manchester as one of seven children to Professor Horace Lamb and his wife, Mary. He first studied medicine before abandoning his studies to be an artist. Aged twenty two he left for London to study under Augustus John and William Orpen at their short-lived Chelsea Art School.

John was particularly formative in those early years and it was with John that Lamb moved to Paris a few years later. While living in Paris Lamb spent a couple of summers on the South coast of Brittany, where he painted the extraordinary, devastating ‘Death of a Peasant’. Lamb had followed a long line of artists travelling from Paris to Brittany in search of a more traditional way of life that was seen as visible here long after it had disappeared elsewhere. It was with this view that Lamb travelled to Gola Island in Northern Ireland a couple of years later. Once back in London Lamb joined the Fitzroy group and was a founding member of both The Camden Town Group and The London Group. He had arrived in London in 1905 with Nina Forrest, nicknamed Euphemia, who became a infamous figure in the Bloomsbury Group. They married in 1906 but separated shortly after. He was friendly with the Bloomsbury group having known Vanessa Stephen and Clive Bell from his early days in the city, but he often had little patience with the group and could be quite disdainful. The eminent critic and biographer Lytton Strachey was however a good friend and between 1912 and 1914 sat for a portrait that would become one of Lamb’s greatest works. It now resides in the Tate and was described by Sir John Rothenstein as “one of the best portraits painted in England in this century”.

10% by value of all works sold during the exhibition will go to support the Longford Trust endowment fund to secure the long-term future of its work supporting serving and ex-prisoners to go to university. The Longford Trust was founded in 2002 to continue the life-long commitment of the politician and Labour cabinet minister Frank Longford to prison reform. Frank was one of only two family guests at the marriage in 1928 of his older sister Pansy Pakenham to Henry Lamb.

Flowers in a Jug

Pay at the Canadian Armoured Division

Henry Lamb served as a doctor in the Royal Army Medical Corps in France, Salonika and Palestine where he was awarded the Military Cross for ‘magnificent bravery and devotion to duty’. He was not an official war artist but was always sketching and drawing in spare moments including landscapes and studies of plants. Some of these sketches with memories from his time on the Macedonian Front and the Palestine campaign formed the basis of large-scale paintings made after the war.

Lamb was appointed an official war artist for the Second World War and after first wanting to document the war cabinet decided on portraits of soldiers and studies of servicemen at work across the South of England. 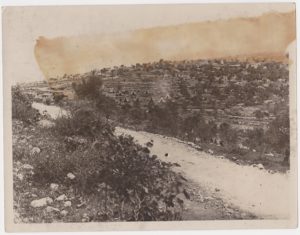 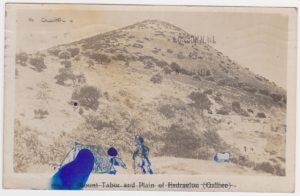 Sketch of Mountains and Tents

Sketch for Irish Troops in the Judaean Hills I

Study for figure in Advanced Dressing Station on the Struma, 1916

Henry Lamb arrived at L’hopital Anglais du Casino in Fécamp in February 1915 with his lifelong friend the architect George Kennedy as his orderly. L’Hopital Anglais was a private hospital of about 100 beds, set up like others through Northern France by British groups of private individuals in response to the escalating number of wounded French soldiers who were in desperate need of places to recuperate. The hospital was located below the cliffs overlooking the bay at Fécamp, a place to recover far away from conflict. Lamb himself was not overworked and filled many sketchbooks with sensitive and often moving portraits of patients, nurses and doctors.

Lamb left Fécamp at the beginning of November 1915 to return to Guy’s Hospital to complete his studies as a Doctor. 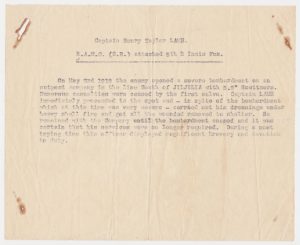 Portrait from Fécamp I

Portrait of Man in Fécamp Sketchbook I

Portrait of Nurse from Fécamp

Portrait of Nurse, Fécamp I

Portrait of Woman Fécamp I

Portrait of a Lady I

Portrait of a Man I

Portrait of a Don

Woman in a Hat

Portrait of a Lady II

Portrait of a Woman II

Portrait of Lady in a Hat II

Portrait of a Male Academic

Portrait of a Man II

Poole Neighbour at the Tea Table

Portrait Of A Young Boy

Portrait of a Young Man

Portrait of Lady in a Hat I