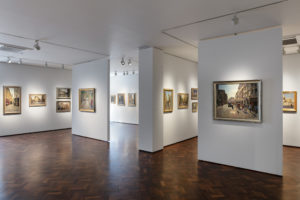 London: The Return records, in 55 works in oil, a first-hand account of London’s return to unfettered vibrancy.

This significant new show leads on from Brown’s 2021 exhibition A Big Year which observed the disquieting changes to the streets of the capital grinding towards their eventual stillness as the nation withdrew into lockdown and we all stayed at home.

London: The Return records bustling life coming back to the city and sees Brown doing what he does best – translating the energy of the street into mesmeric oil. Painting for him is a process that happens in front of his subject regardless of weather, like an embedded reporter covering events as they unfold. His interest is in light and movement, how buildings are translated into colour and how people, vehicles, animals and road signs all add their accidental and ubiquitous charisma.

This exhibition celebrates the exuberant return of light and life to the capital.

Peter Brown, Leading contemporary figurative artist talks painting, the art of working outside and the role of representational art.
Peter is no stranger to working in the public gaze and here talks for the first time about the reasons why this has become part of his practice and how stitched this is to his admiration of those painters of the before him who set up their easel outside of the studio.

There are innumerable Londons of the Heart – cherished silently by generations of matter-of-fact Londoners, proclaimed enthusiastically by show-promoters and tourist companies, carried away in secret stored memory by visitors far too numerous to count.

For many, Hyde Park on a summer’s day, trees low with greenery over the tiny figures who are actually allowed to lie on the grass, is the epitome of ‘their’ London. For others, it will be the fountains in London’s only really un-British high Renaissance site – Trafalgar Square. Laid out in 1830 on the site of the royal stables in the last years of Georgian decadence, it was finally completed, with Nelson’s column and lions, during the accelerating rise of Victorian prosperity.

For other visitors again it will be the purlieus of theatreland, Shaftsbury Avenue and Piccadilly, that represent desirable London. Or perhaps one of the more favoured inner-suburbs, Hampstead, Islington or Primrose Hill, where they may have enjoyed a visit with Londoners fortunate enough to live in one of that vast number of Victorian terrace houses that have managed to survive the evil designs of 20th century planners, and give London its unique appeal.

All these Londons are to be found in Peter Brown’s current exhibition, in which – suitably for London and its worldwide reputation – wet and wintery weather predominates. Brown is, I have to say, a master of the pavement glistening with recent rain, of drops blowing across an alley, also of the kind of huge, impeding puddle that collects at the edge of a roadway or even across a pavement. Such a watery surface transforms an otherwise banal view, turning a streetscape back into something with links to nature and to a past when this same street was a country pathway between elms…so I enjoy particularly his Old Vic, Lockdown. The theatre in the background to the all-foreground puddle looks modest, which in fact it usually does, even when properly open to audiences. And even more I like Waterloo Road, with the great slanting blue rail bridge dominating the scene, as it does in reality, but here competing with the roadway beneath, has the air of having been turned into a canal.

But snow suits Brown even more than rain, which is why one of my absolute favourites in this show is Snow Flurry, The Ritz, Locked Down . . . It captures, as do many of these pictures, the weird quietness that repeated waves of Covid fear have imposed on the normally clamorous and crowded West End. But it has a timelessness that transcends this particular historic context: the two separate glum male figures, sheltering upright under the arches of the Ritz hotel are so near and yet so far from the small, busy figure of the man in brighter light exercising his dog. The snow that is just beginning is, even as it falls, turning to mush, which gives the whole scene an eerie, not-quite-of-the-present-day air. Snow tends to do this anyway, when it has settled properly, disguising modernity, giving streets once again the aspect of rural lanes. Falling Snow, Regents Park Road achieves this feeling splendidly, as too does Well Walk, Snow,

where the white is still pristine but beginning to retreat. In both these pictures, the humans about are few and incidental (as real people tend to be) and this gives the images an almost Pissarro-like combination of modesty and authenticity.

Brown is good, too, at the way the coming-on-of-evening may transform an otherwise banal urban scene. Piccadilly and the Dilly Hotel Evening is greatly improved (from an afternoon version of the same scene) by the pricking of vehicle sidelights and by a luminous evening sky. So too is his Garrick Theatre, Planes Leafing, in which the tender green fuzz of the first leaves of spring transforms an otherwise standard London view. But my favourite picture of all in this show is a puzzler. Titled Middleton Road from St Peter’s Way, The Fox, it shows an obviously downmarket area, far from tourist haunts, with variegated shopfronts made over many times and a rail bridge somewhere down at the bottom of a hill. It is undoubtedly, to a Londoner, echt. London – but where is it?

Research in an A-to-Z produces a couple of plausible inner-London sites for both street names, but not in combination. Frankly, I do not believe this haunting view belongs in gentrified Canonbury (one option) or yet in heavily respectable Golders Green. Just what, I long to know, is Peter Brown up to? And what does he know that his pictures of London do not tell us?

Lockdown, the Hippodrome Casino and Wyndham’s

Lockdown, Back of the Apollo and the Gielgud

The Duke of York’s Theatre, Coliseum and St Martin- in-the-Fiel

The Salisbury from The Noel Coward Awning

Lockdown, “We’ll be back” The Old Vic

Rain, to Covent Garden from the back of Theatre Royal Drury Lane

Piccadilly and The Dilly hotel, afternoon

The Ritz, locked down with narcissi, looking east

Towards Piccadilly Circus from Coventry Street

As London begins to emerge, Trafalgar Square, the Landseer Lions

Afternoon as the restaurants open, bottom of Rupert Street

Freemasons’ Hall from Long Acre, 10.00am

To Seven Dials, from the top of Shaftesbury Avenue and Monmouth Street

Other parts of London

Queen Victoria Street from the bottom of Watling Street

The Churchill Statue, Snow and Starling 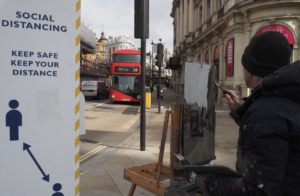