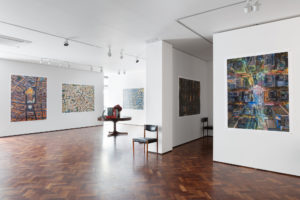 Jeffrey Milstein’s first solo show in the UK features a selection of works documenting ‘patterns of culture’ in Europe and the United States as viewed from above including extraordinarily compelling images of Paris, London, New York, Rome and Florence. His photographs are taken from small planes and helicopters, using very high-resolution digital cameras. With his architect’s eye for patterns and geometry, he has pioneered a style of precise straight-down aerial photography. The images of Italy are the first taken by the photographer in Rome and Florence, and will be premiered in the exhibition.

The same occasion will celebrate the launch of the first large-scale publication produced by the artist entitled FLYING. Vast in scale at height 22” x width 28.75” x depth 3” with a silver fabric cover and embossed text, the book features 59 full-scale prints and an introduction by James Crawford, writer and broadcaster of BBC One documentary series Scotland from the Sky. Crawford comments: ‘From the sky, Milstein turns row after row of LA backyards, trees, houses and car parks into a remarkable unfolding structure, like living cells growing under a microscope. London’s Waterloo Station at night becomes a beautiful, iridescent sea shell, or the beginnings of a DNA double helix.’

Crawford highlights the significance of these images, ‘This, of course, is what the view from above does better than anything else. It shows that our world never stops changing, not even for a second. It shows that our cities are hard-wired for change – always growing, shifting, suffering or thriving. Always regenerating and rewriting themselves. And one thing is for certain. The landscapes that Milstein – and, thanks to his photography, we – look down on today, will not be the landscapes of tomorrow.’

Woodstock, NY-based Jeffrey Milstein was born in the Bronx in 1944. He received a degree in architecture from UC Berkley in 1968 and practised as an architect before turning to photography in 2000. Growing up his two interests were art and flying, becoming a pilot at the age of 17. His passion for flight led to his well-known typology of aircraft photographed from below while landing. The work was presented in a solo show at the Ulrich Museum of Art in 2008, as well as in a year-long solo show at the Smithsonian National Air and Space Museum in 2012. In 2016 it was on display at the Brandts Museum in Odense, Denmark.

In recent years Milstein has reversed the direction of the camera creating award winning unique aerial images of man-made landscapes that are iconic and emblematic of the modern world.