Works will go live to the public at 10am on 14 July, please enquire with the gallery to purchase a work in advance.

It is with great pleasure that we welcome Tuesday Riddell back for her highly anticipated second solo exhibition at Messums London.

At the heart of the show is her largest work to date – a monumental 9 panel work standing at over two metres tall. It is astonishing in both ambition and complexity and marks a new level of confidence in Tuesday’s practice. This is the centrepiece of a collection of 20 works exploring the web of interconnectedness that joins flora and fauna in the commerce of life and death.  It is an exchange that goes on largely unobserved down at the level of the forest floor and in the shade of leaves lifted or earth turned, underneath the soil and in pools of water. Understorey is its name in English and sottobosco the more vegetal Italian variant. Today these transitory worlds – sottobosco once described a generation of Dutch genre painting fascinated with the iconography of resurrected life – represent clues to the salvation of our own planet in how we treat the environment.

Tuesday is one of very few artists who work with Japanning, a form of lacquer work brought to Britain in the 17th century having been developed in Europe to meet the rising demand for Asian lacquer wear. It is an extraordinarily laborious process, each panel has between 25 to 30 layers of lacquer, embedded with gold and silver leaf and mother of pearl. Tuesday has recently learnt a new technique – coromandel; a technique that involves carving into layers of gesso like a relief, which we see here for the first time. Tuesday discovered Japanning as the Painter Stainer’s Decorative Surface fellow at City & Guilds Art School by which time it was only practiced in conservation. Yet in a centuries old practice Tuesday found a new visual language, breathing new life into an almost lost craft.

Tuesday builds on a language from sottobosco painting, a sub-genre of 17th century Dutch still life painting that, inspired by scientific developments, looked to the forest floor and overlooked creatures and weeds long considered inferior. In a similar way Tuesday is informed by contemporary discourse on nature growing from the environmental crisis. While working on this series she read and watched science fiction about the environment, drawn to the idea of nature mutating in defence to human inflicted damage. These included the Japanese manga of Miyazaki Nausicaä, Valley of the Wind where nature destroys man after the destruction of the world and mutating natural worlds in Alex Garland’s Annihilation. Entangled Lives a book by Merlin Sheldrake on the alien lives of fungi was another important influence. Again, it is unknown, undiscovered worlds – hidden communications and unexplained phenomena. Here there is space for imagination to take hold. 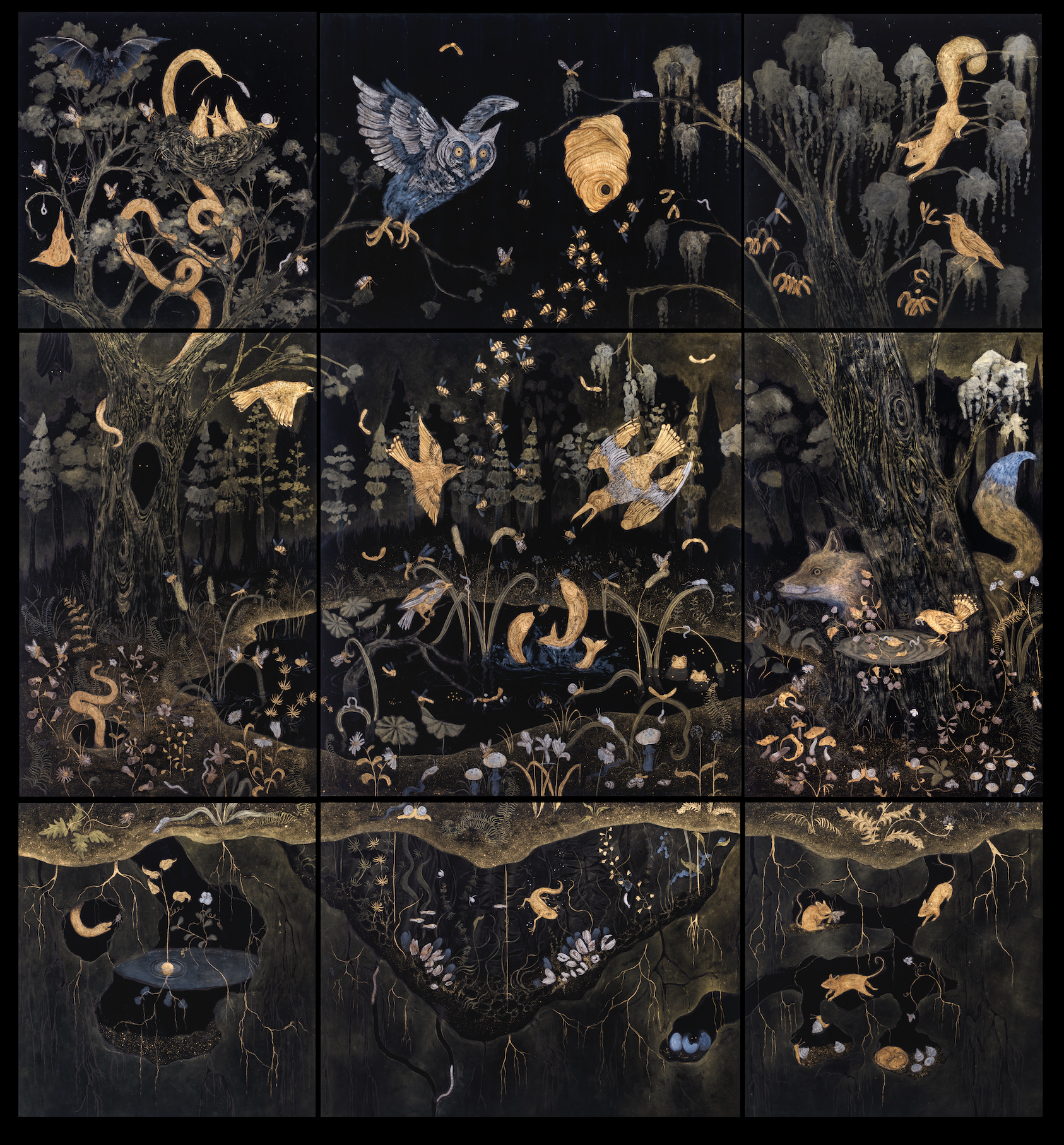 Beneath the bee’s and the Black pond 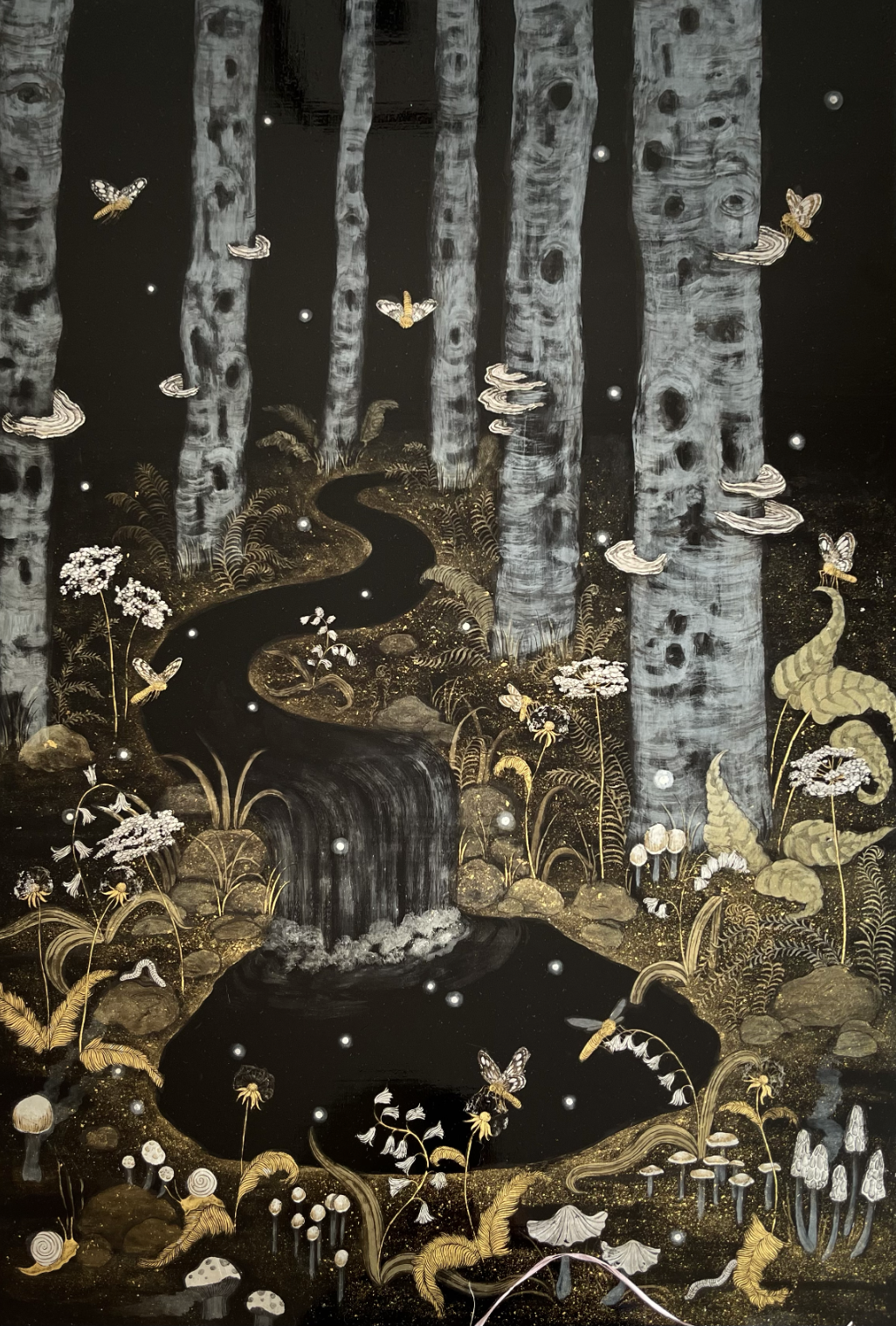 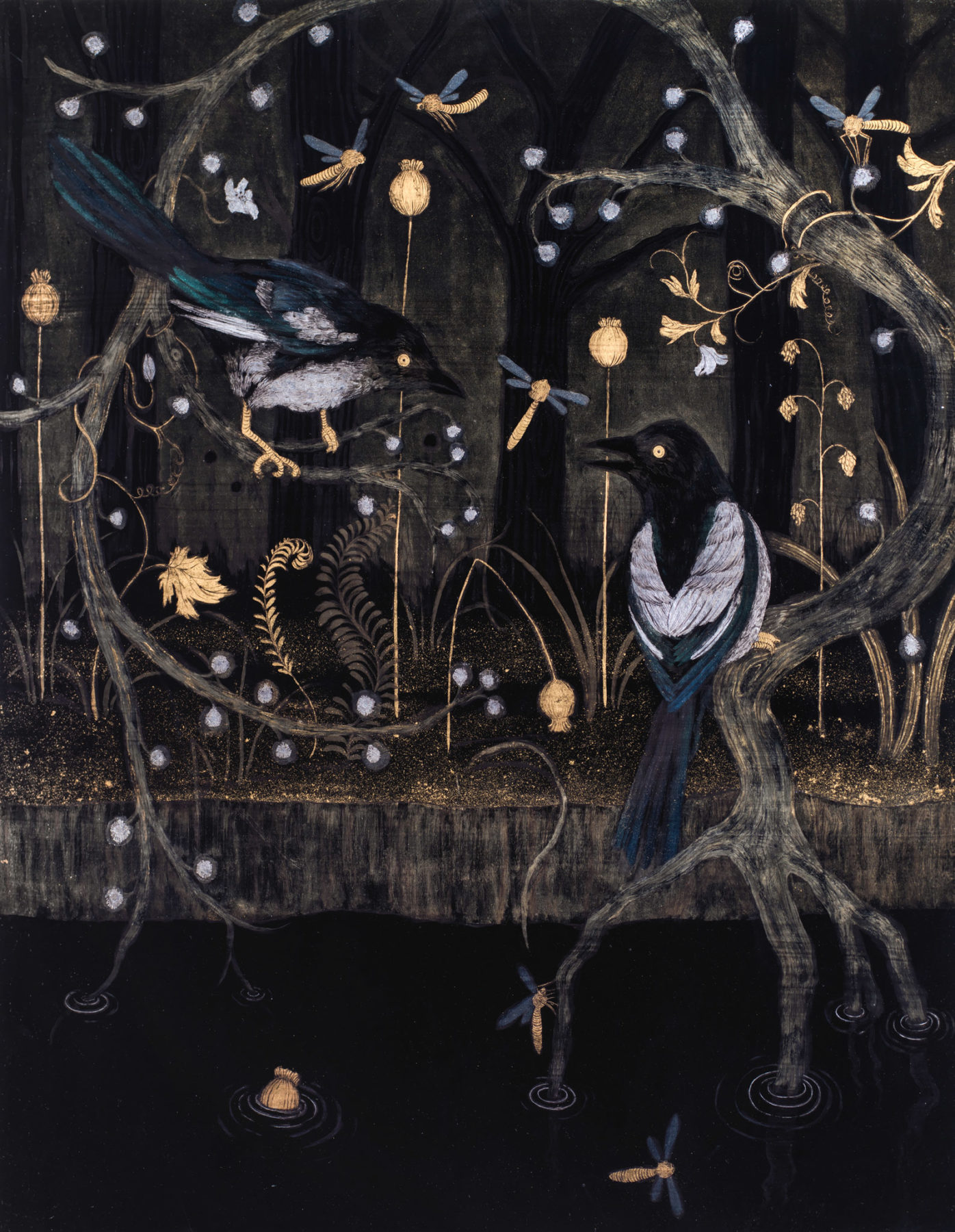 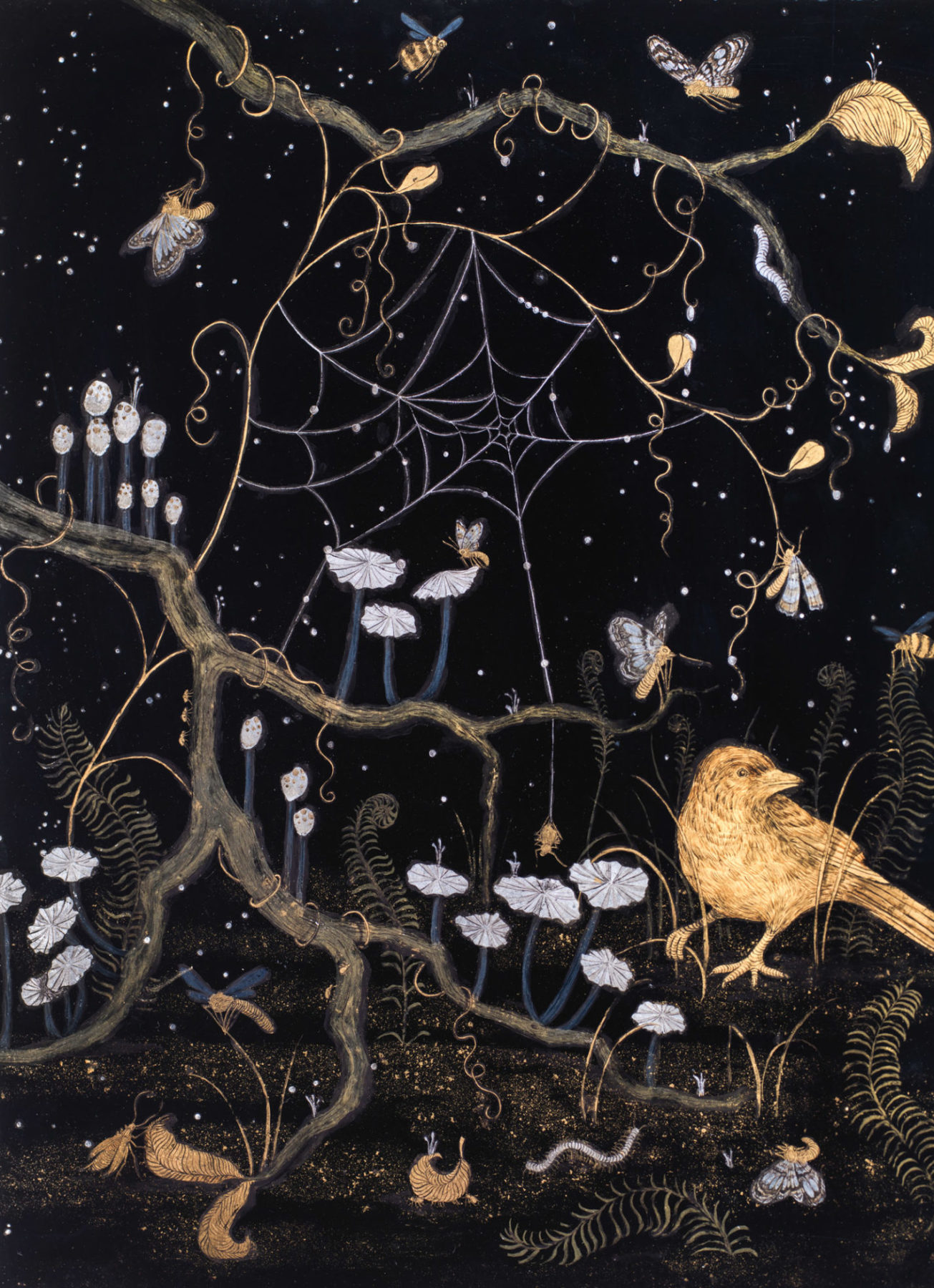 Spiderweb in the rain 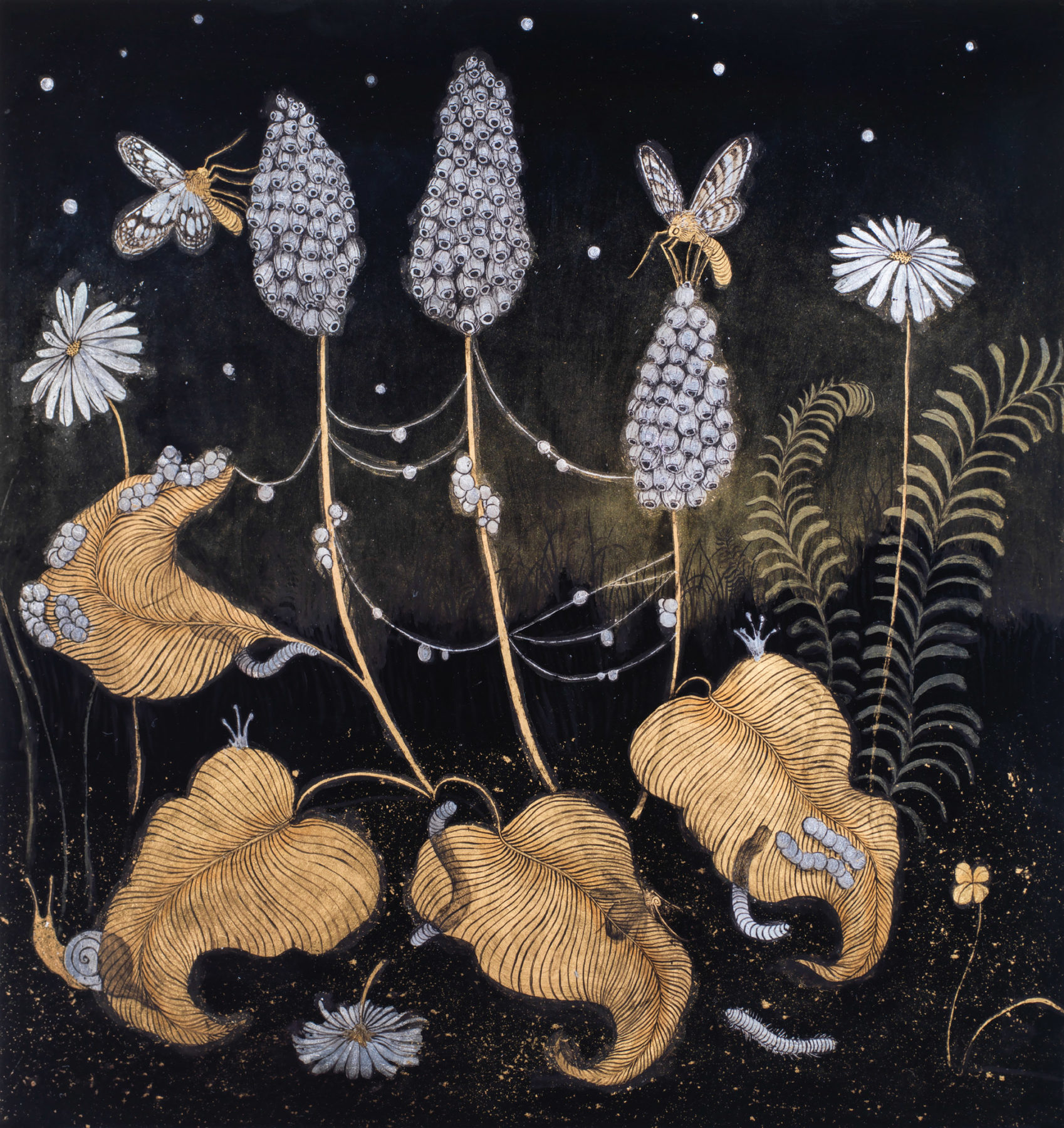 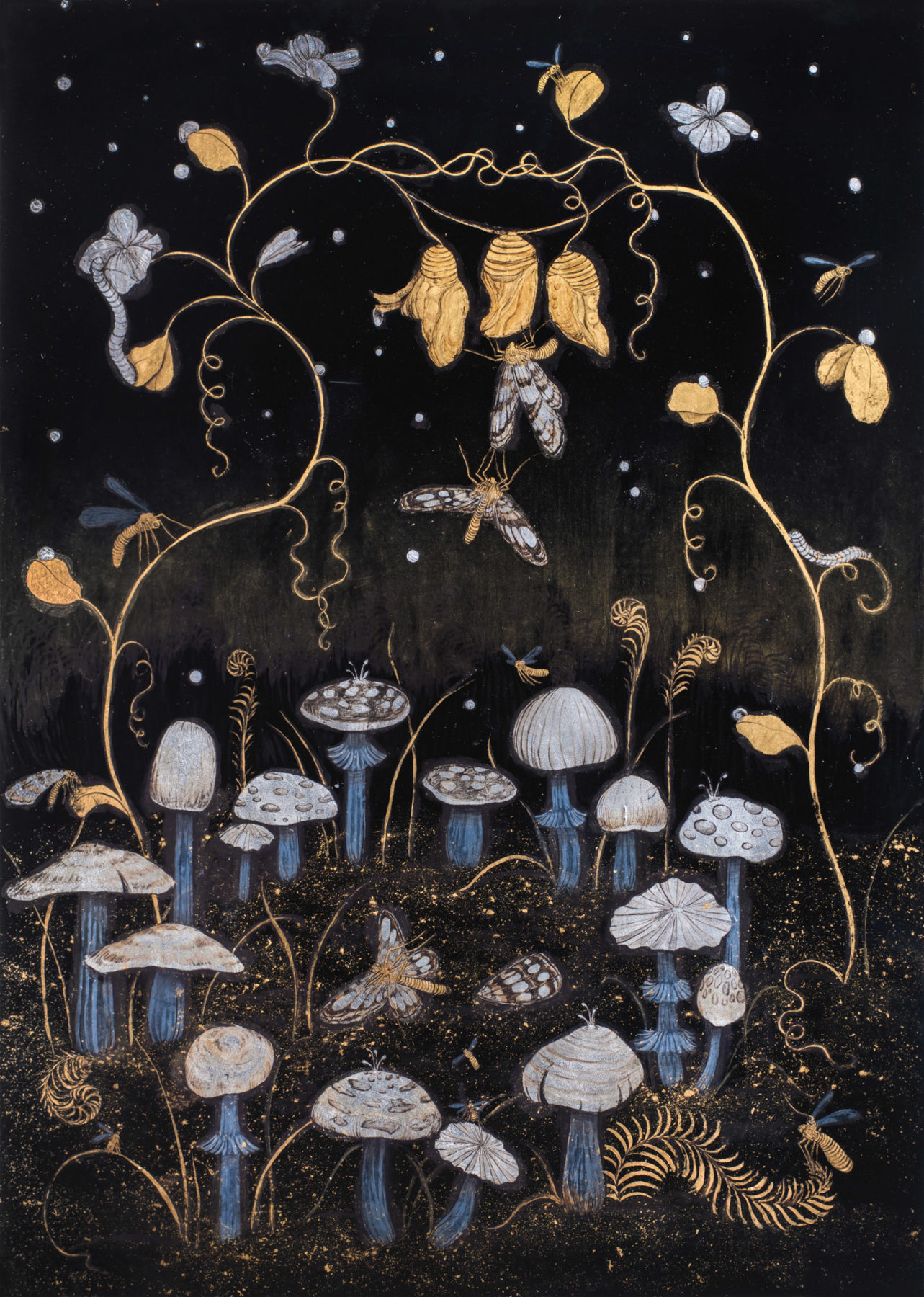 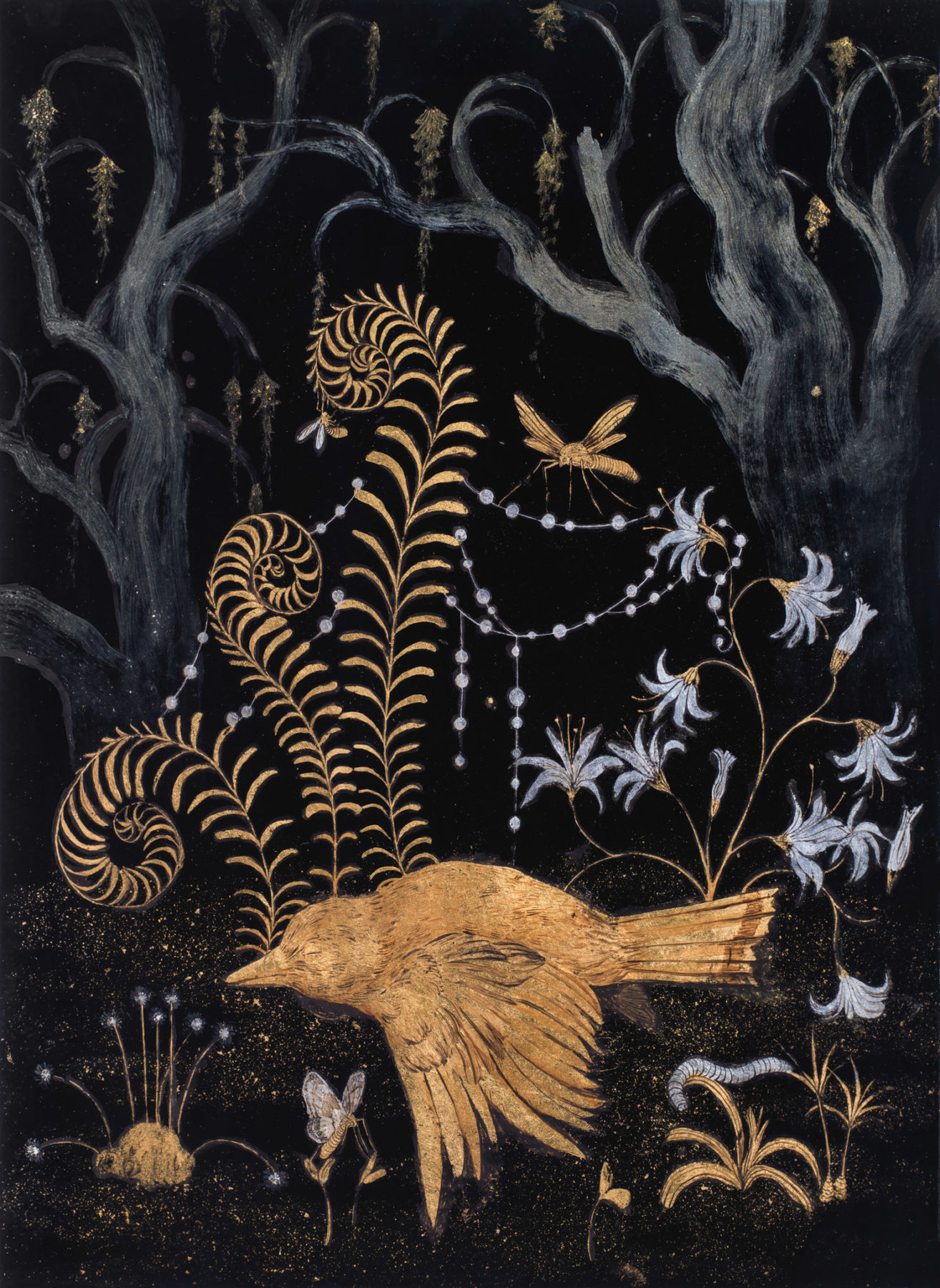 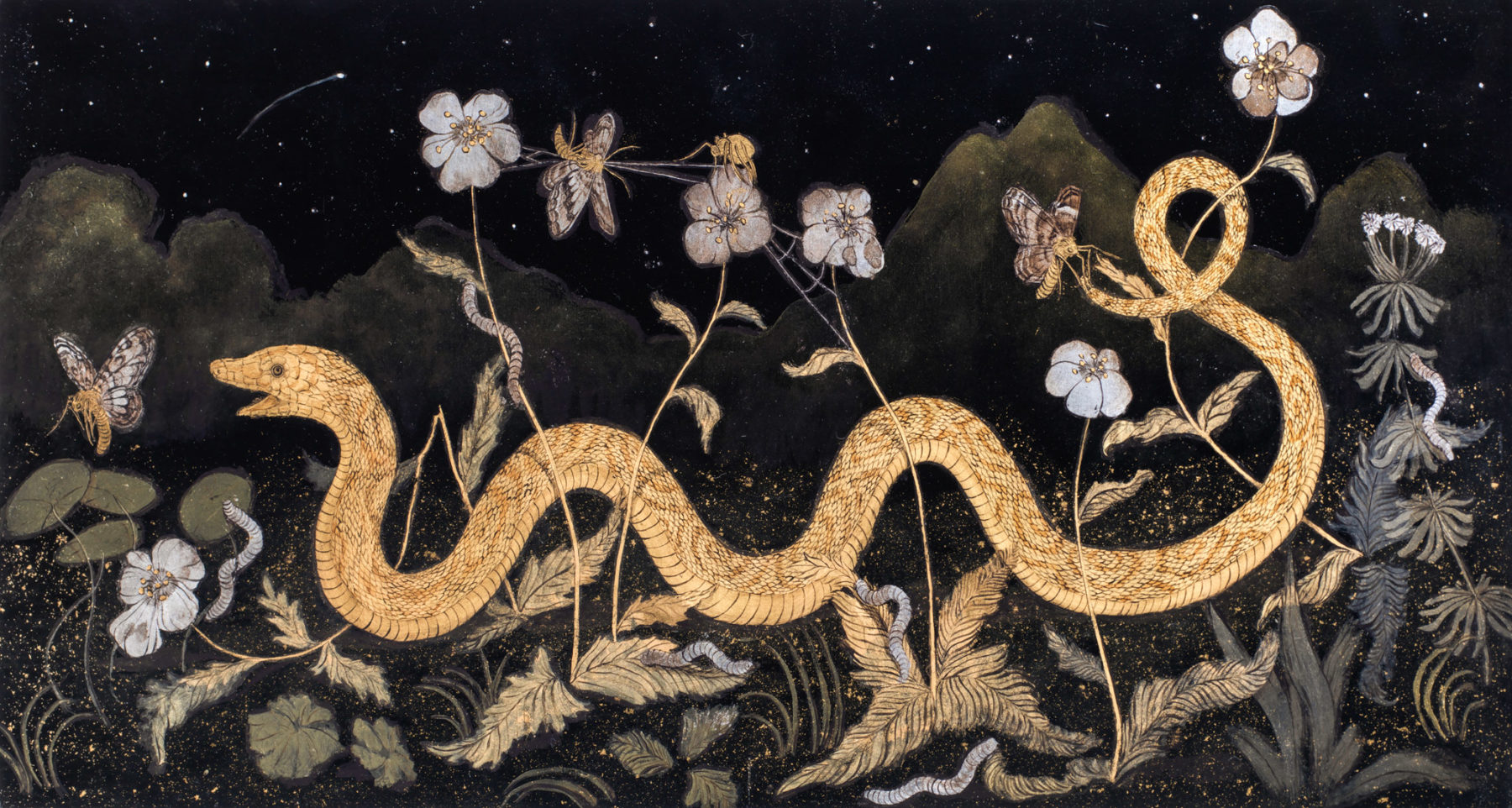 Snakes under the stars 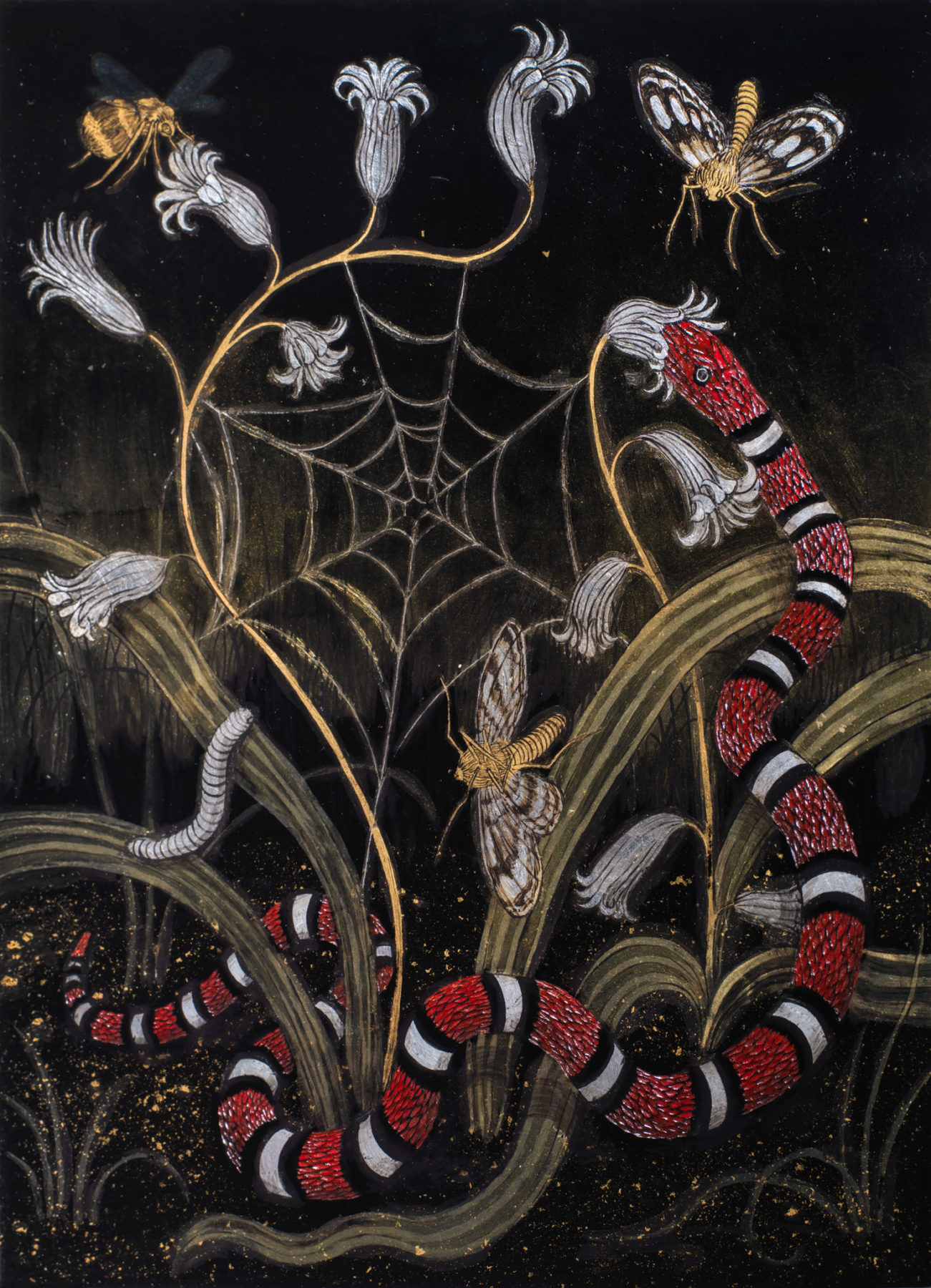 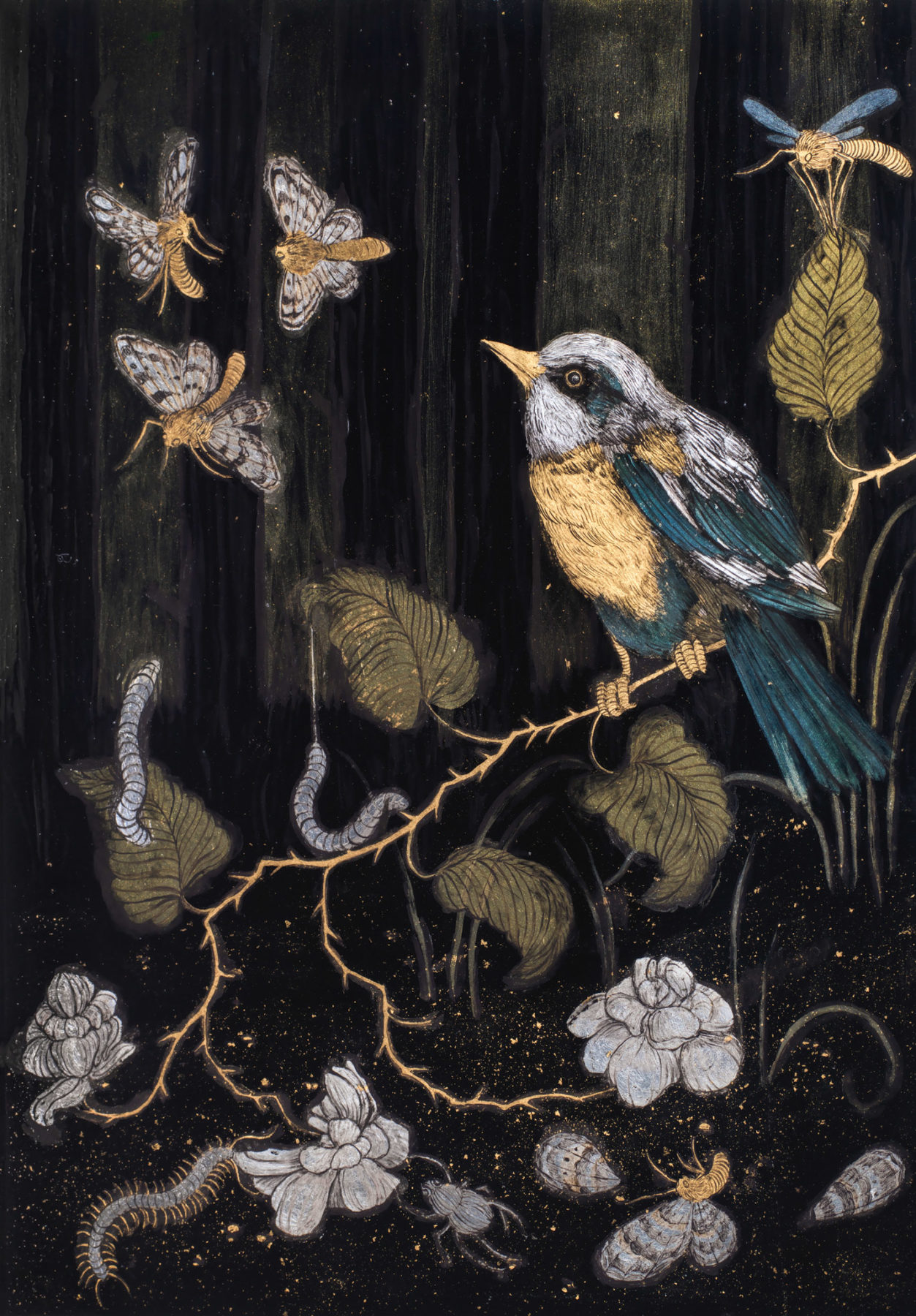 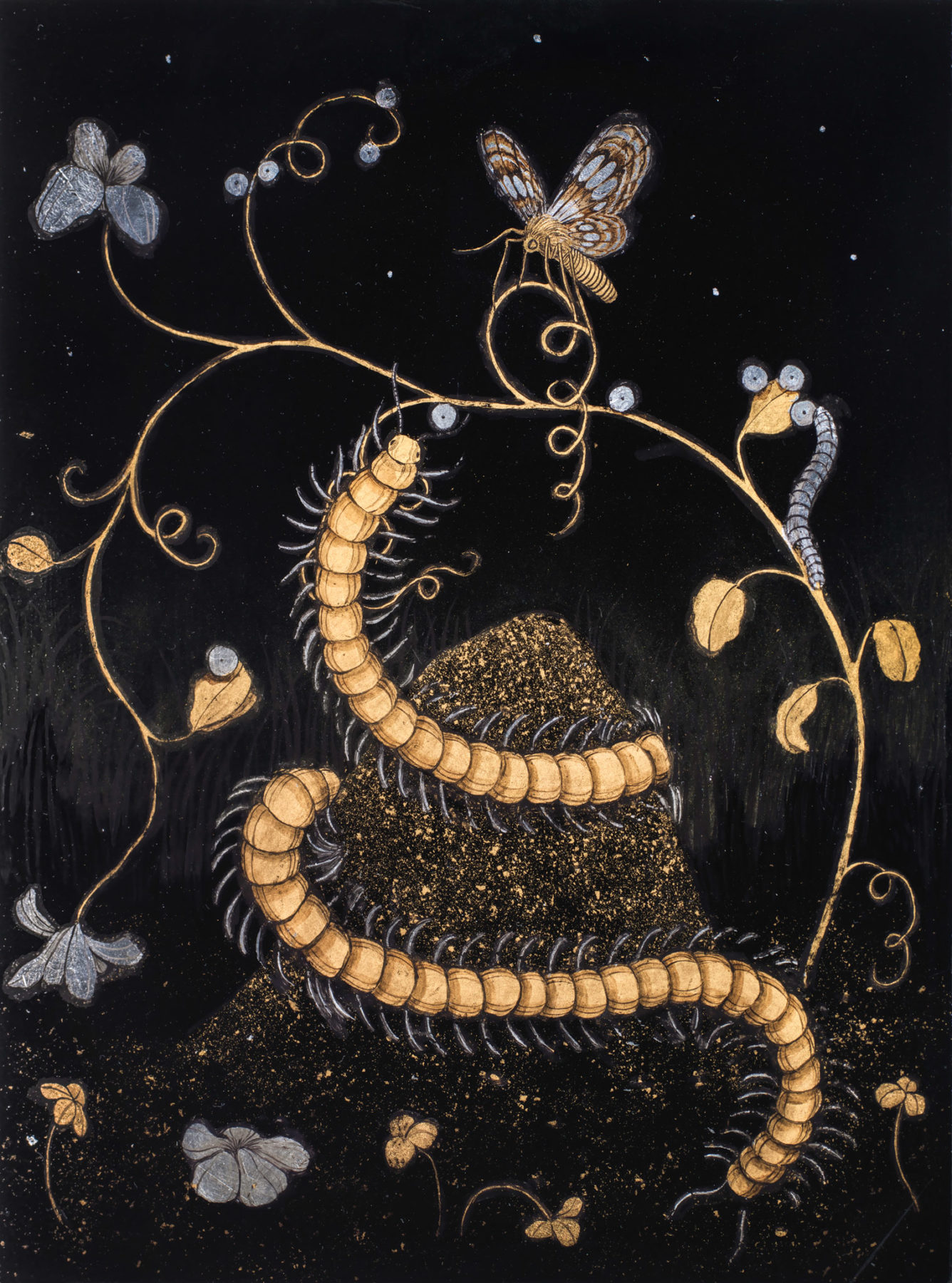 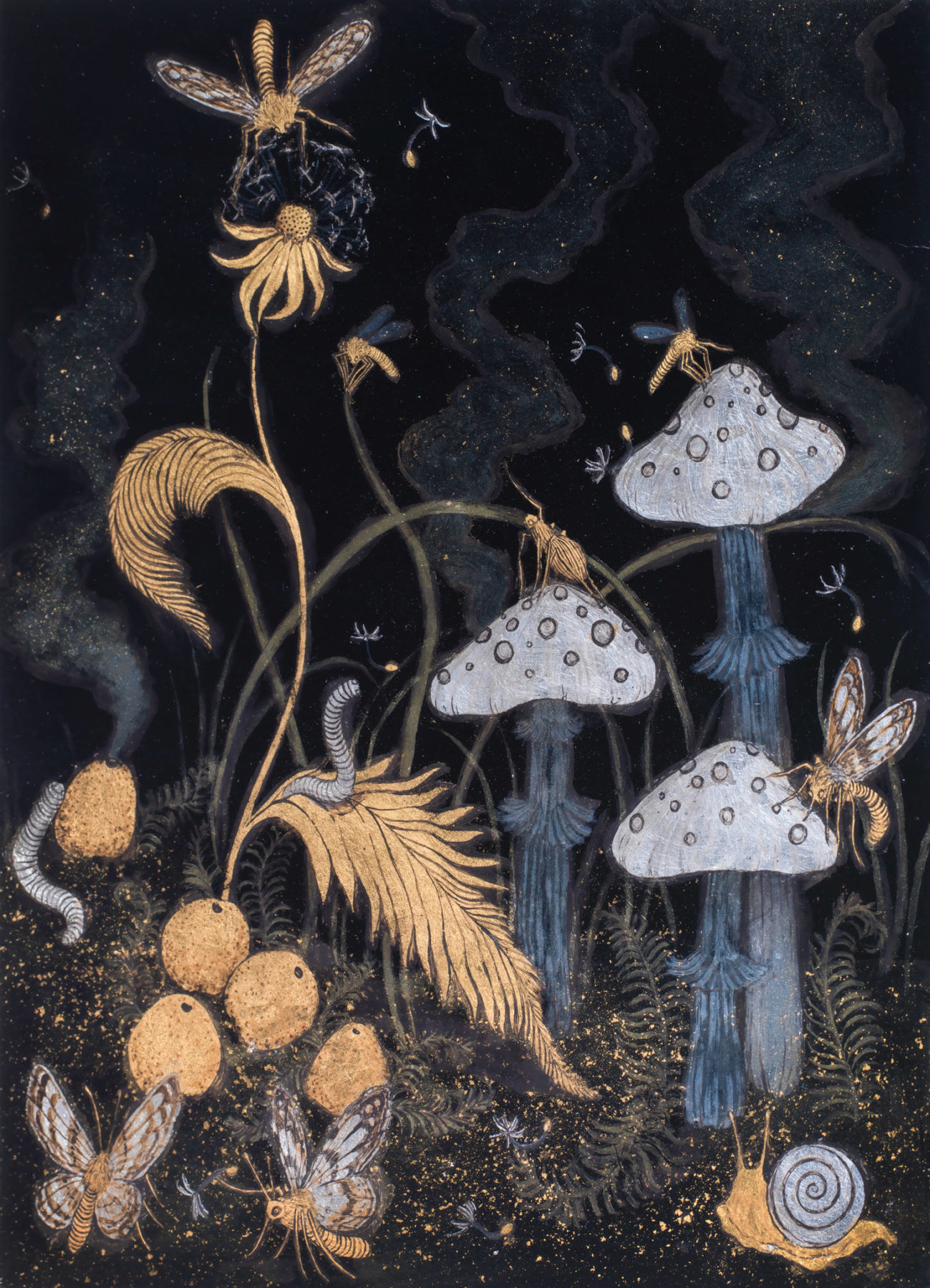 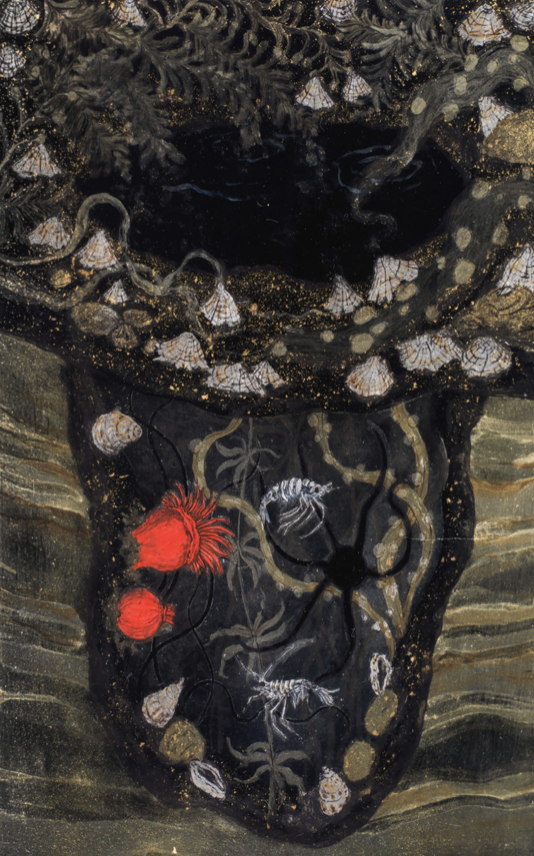