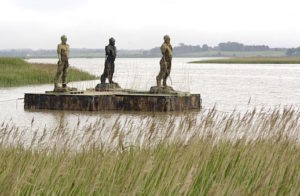 One June morning I was following a footpath along the edge of a tidal creek near Snape in Suffolk, when across the reeds I saw the dark head of a man: improbably tall, aggressive in his posture, and standing far out on the mud-flat, towards the silver water of the channel. I halted – and it was only when I moved forwards again that I realised there were two other men to the left and right of the first, facing in the same direction, and that all three were naked and that all three were bronze.

This was my first encounter with the work of Laurence Edwards, and it stopped me short. The year was 2008, and these were Edwards’ Creek Men: a trio of giants, each eight feet high and a quarter of a ton in weight, stood on an iron raft. Their arms were branches of toxic hemlock, and fungus grew from their shins and shoulders. The surface of their skin was churned as a ploughed field after rain. Their akimbo stances, and the triangular formation of their arrangement, suggested – at least at first glance – a fierce, military intent. Browned and brutal, they seemed recently to have roused themselves, shuddering, from the marshland mud after a long torpor.

Edwards had made these reed-bed golems in their first form from mud, in fact, modelling the original figures roughly in clay on steel armature, letting the wet clay dry until it was leather-hard, and then beating it into shape using ‘whatever [was] handy; hammers, lengths of wood, fists, shovels’. Once each giant was complete, he moulded plaster around it to create white cases that together contained the negative shape of the clay. These cases Edwards then filled with hot wax, which congealed to recreate the figure in fifteen separate sections. He covered these wax sections in fireable plaster to make new moulds, before placing each plaster mould in a kiln for two days to melt the wax back out of it. At last he had the hollow forms that were ready to receive the molten bronze. The metal was poured glowing into the moulds, then left to cool and harden until the plaster could be smashed and washed away. Each metal body part was then fettled and welded together – and at last the bronze giant emerged. ‘Now when I hammer and sand his chest’, noted Edwards at the time, ‘it rings like a bell’.

This is the ‘Lost Wax’ method of bronze casting, and it is both logical and magical. Presence begets absence begets presence begets absence begets presence. Clay becomes bronze; wax becomes smoke; hollow becomes form; brittle plaster impossibly contains liquid metal. Concealment and revelation pursue one another. Undertaken on the scale of the Creek Men, lost-wax casting is massively demanding of both patience and physicality on the part of the artist. It has aspects of both ritual and fetish. It unites violence and delicacy: fragile plaster moulds and wax forms are easily damaged, but clay and bronze require forceful, even ferocious shaping.

Yes, violence was intrinsic to the making of Edwards’ figures, and their finished bodies retain an aura of this violence: this was what stopped me short that day in June. The Creek Men belong to a broader tradition of once-buried figures summoned from the East Anglian earth, haunting an era that is not theirs. MR James’s ghost stories are filled with such eerie presences, summoned from barrow or collapsing cliff. So too is the nameless king of the Wuffingas, interred in his boat at Sutton Hoo in the late 6th century, and unburied by archaeologists 1300 years later. All of these figures need to be approached with great caution, lest they pull in their wakes pasts – or futures – that we do not wish woken.

For all their prima facie fearsomeness, though, I came over time to see the Creek Men not as eldritch paramilitaries set on vengeance, but as more ethically neutral emanations of the Suffolk terrain itself. Made of mud, metal, reed, wood and fungus, they were not just in place but of place. Their gnarled trunks and limbs were oakish rather than orc-ish. Chronic and chthonic, they were indigenes – and there was an aspect of tolerance to their presence, as well as of threat.

I have followed Edwards’ work with fascination since that first meeting. The sculptures that have drawn me most have all been humanoid figures, and have all in some way been supplemented or burdened by the landscapes of their making. In ‘Carcass Carriers’, men trudge with slaughtered hogs slung on their backs. The ‘Wrecker’ series shows men bearing armfuls of spars sharp as spears. ‘Loaded’ is a bronze man with a tilted bundle of reeds and branches so disproportionately long that they would surely make progress unmanageable. The figure in ‘Beast of Burden’ is only 20 centimetres high, but the load he carries – a slender twig – is an extraordinary 160 centimetres wide: a funambulist with his pole, perhaps, balancing a fine path through the dark world. ‘Man of Stones’ is freighted down by the rocks and rods that have clumped on his chest, as though he were the magnet and they the metal. ‘Crystal Man’ stands apparently unaware that his torso has begun to crystallize, spiking outwards in chunky polyhedra. The piece recalls JG Ballard’s early catastrophe novel The Crystal World (1966), in which time itself has begun to leak away, resulting in a super-saturation of space, such that anything within the zone of leakage re-iterates itself as pure structure, self-encasing in intricately outgrowing geometries.

In many of these works, Edwards casts organic materials – phragmites stalks, leaves, pebbles, hogweed stems – into the pieces. In the ‘Chord’ series, figures barely recognisable as human exist as thatches of bronze, somewhere between bird’s nest and mud-clump, and from the top of each rises a beautifully slender reed – a kind of chord or note made visible, then – tapering vertically skywards for metres. Perhaps the most compelling of all these figures to me is the most conceptual: in ‘The Long Wait’, a muscular figure sits on a stump, head angled down, hands between his legs. From each temple protrudes a crooked thin stick, at least as long as the figure is high. What are these extrusions? Antlers for a human Herne? An atrocious mind-manacle, inserted by an absent authority? Cognition itself externalised, jagging out to right and left?

These prostheses and outgrowths that so often extend or impede the human body in Edwards’ work are, I think, expressions in part of his understanding of ‘landscape’ as something that bears hard upon us – that burdens or lightens us, that shapes the edges and textures of our bodies in drastic ways. As the sculptor’s fingers ruck the soft clay, so our landscapes knead and gnarl us. The word ‘landscape’ entered English from the Dutch in the late-sixteenth-century, at which point it carried with it strong associations of stasis, order and artistry. In the course of the 1500s it had become so strongly associated with the Dutch school of landscape painting that – at the moment of its Anglicisation – its primary meaning was ‘a painterly depiction of scenery’. It was not used to mean ‘physical terrain’ until as late as 1725.

These associations of stasis and passivity persist in contemporary understandings of ‘landscape’ as something to be looked at or driven past: a stage-set or wallpaper for our activities, rather than a force or medium within which we exist and with which we think and feel. As I have said elsewhere, I prefer to imagine ‘landscape’ as a noun containing a hidden verb: landscape scapes, it is dynamic and commotion-causing, it sculpts and shapes us not only over the courses of our lives but also instant by instant, incident by incident. It can deplete as well as supplement; leaving our bodies feeling hard and consolidated as crystal – or dispersed and mobile as a flock of birds.

Edwards’ most recent work signals a clear change of direction and shift in texture: from the consolidated to the dispersed, from the hard to the mobile, and from the encumbered to the dissolved. His bodies have always escaped themselves in some manner, but where his earlier figures have tended to be built up and bulked out, these new figures are made up more of gaps than of joins. In ‘Nothing is Final (Let The Wind Blow)’ from 2015, only a pair of feet remain whole of the figure that once was. The rest of the body has taken flight into metal petals that swirl before the eye, held delicately aloft by a cross-hatch of fine struts. ‘Myriad (Evergreen)’ shows a body leaving itself in two senses: beginning its scattering, and turning itself into leaves. Both are the haunting memento mori of a modern materialist. They remind us of the comfortless immortality that that comes from knowing that our bodies are matter, and as such belong to a cycle of dispersal and reconstitution that far exceeds the human lifetime. Dead we are dust, dust we are clay, clay we are bronze.

Technically, these new works have brought new challenges. Each begins as a full figure, cast in wax: as Edwards detaches and displaces each piece of the original outwards, the ‘figure slowly dissolves,’ as he puts it, ‘and becomes its own environment’. Structurally, however, such a radical disassembly of form is problematic. There are limits to the degrees of cantilever and suspension that are possible before collapse occurs. It also poses difficulties of casting: to get the bronze to flow through and along these intricate channels, and to ensure an evenness of resilience across the piece, it is necessary almost to feed the bronze into the mould leaf by leaf, petal by petal.

The result, though, is startling: spectral figures on the cusp of evaporation, human bodies drastically opened up to the world: pried into fractions by landscape rather than weighed down by it. This new work seems to me to belong to a mystical artistic tradition that flourishes on the very brink of abstraction or abolition, and that joins artists as various as Thomas Merton, St John of the Cross, TS Eliot, Simone Weil and Patrick White. In their shapings around evacuated space, Edwards’ new works practice a sculptural version of apophasis, whereby the ineffable is spoken of only in negative, eluding definition by definition. Viewing them, I thought of the beautiful moment in White’s great 1957 novel Voss, where Laura finds herself depleted to the point of diffusion by the indifference of the Australian desert:

The material part of myself became quite superfluous, while my understanding seemed to enter into wind, earth, the ocean beyond…I was nowhere and everywhere at once. I was destroyed, yet living more intensely than actual sunlight.