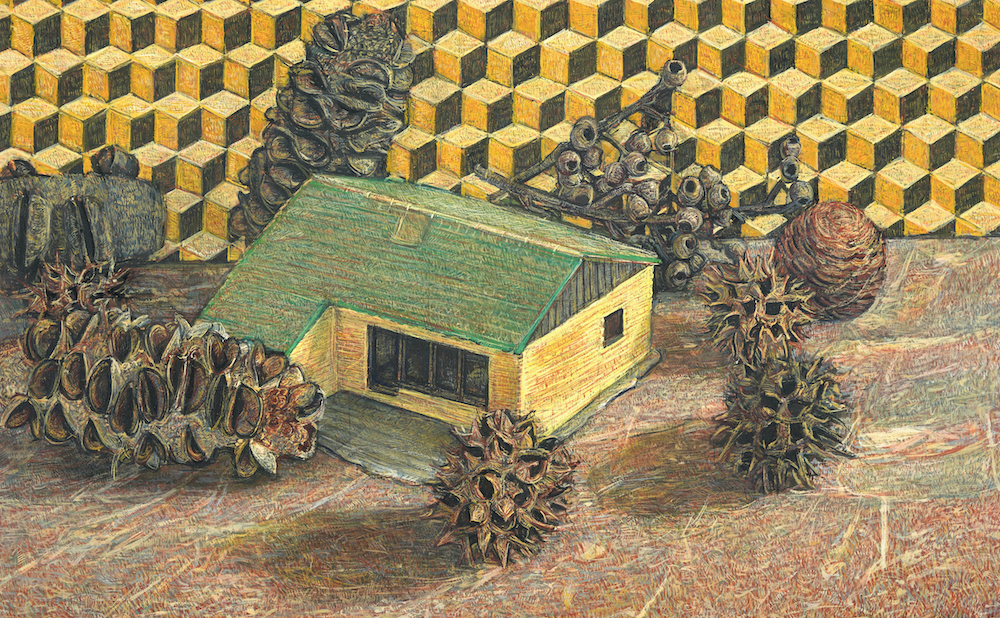 Although he is fortunate enough to have his studio on an island overlooking the peaceful River Thames, not far from Hampton Court, Antony Williams admits that ‘lockdown is a strange time. I’m used to working on my own, but at the moment I’m not seeing anyone else.’ He has even been staying, some of the time, in his conservatory at home. But the accumulation of objects in his studio play a crucial role in Williams’ current work. ‘Still life is a major theme’, he explains, before adding that the masters of the past also nourish his paintings. Over the years his admiration has ranged freely, from Bellini and Piero della Francesca through to Turner, Cezanne and Morandi. In terms of modern British art, Williams feels particularly stimulated by the still life paintings of Euan Uglow, who was close to William Coldstream and the painters of the Euston Road School. Uglow’s measured approach, aided by a metal instrument of his own design, has links with Williams’ intense urge to paint what his eyes see without using conventional perspective.

Even though Williams has always been a figurative painter, he responds to abstract art as well. ‘It’s very appealing’, he says, and Still Life with Agapanthus is filled with a dynamic interplay between the prominent plant and a geometric structure behind it.  ‘I’ve had this agapanthus for about twenty years’, Williams reveals, ‘so I took the roof off a toy house to disclose the rooms on the first floor. I like their geometric structure and the way they’ve been painted.’ Their simple shapes and strong colours create a grid-like abstract quality, which contrasts with his far more representational handling of the agapanthus. It thrusts upwards with obstinate vigour, encouraging Williams to speculate that ‘maybe it’s trying to escape from the confinement of the toy house and make a bid for freedom.’ 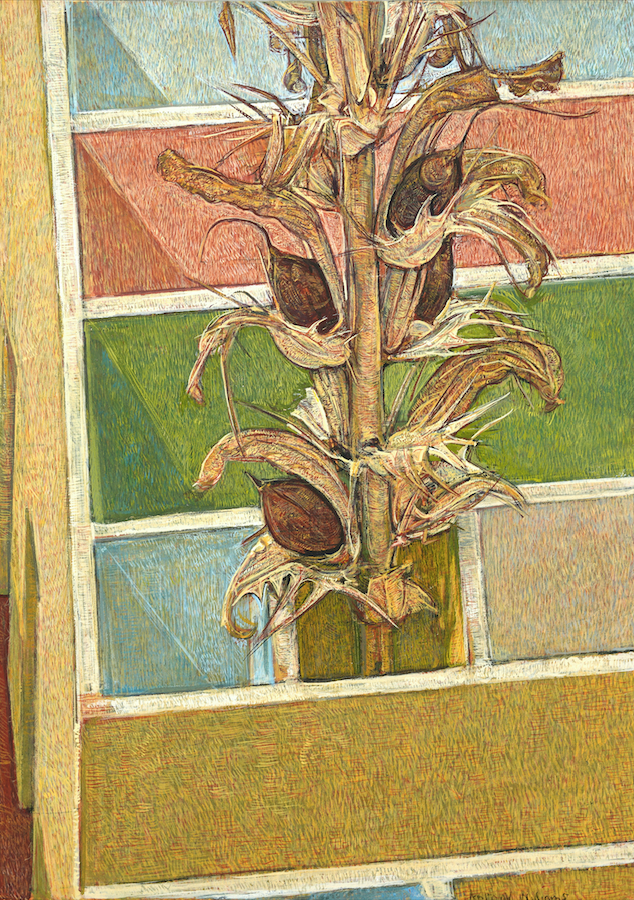 In a painting called Toy House and Chestnut, the roof has been returned to its customary position. Williams’ subtle handling of paint, enhanced by his involvement with egg tempera, celebrates the shimmering colour of the roof’s tiles. But he emphasizes their miniature dimensions by juxtaposing the toy house with a surprisingly large chestnut. It was acquired during one of the visits he made with his wife to Chobham Common, an area of outstanding natural beauty alive with heather, fir trees and much else besides. Created originally by ‘our neolithic ancestors’, the Common has encouraged Williams to bring back plenty of fragments like the chestnut. And in his painting he contrasts the wild, strange foliage with the toy house, suggesting that it might soon be enveloped by all this lively debris. 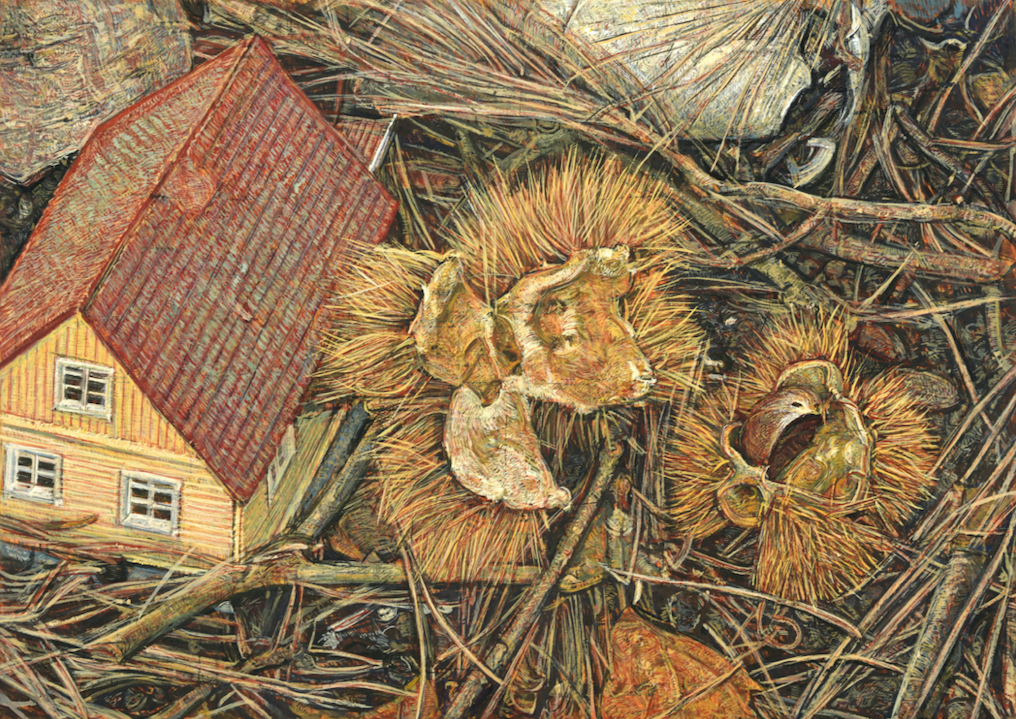 The title given to Triptych gives away very little about its content. Yet this painting turns out to be one of his most elaborate and haunting works. Using the first floor of a dolls house — a dilapidated edifice which Williams acquired from Kempton Racetrack Antiques Market — he has placed a bizarre occupant in each of the three rooms. On the left is a sea urchin, a prickly creature that Williams brought back from Greece. In the centre, an oversize magnolia fills up a surprising amount of space while a mysterious tail undulates across the floor from another room. And on the right lurks a dinosaur ‘which my wife bought for me’. At once comical and menacing, it is probably trapped and increases the claustrophobic feeling of the entire triptych — a work where all the inhabitants seem imprisoned in their separate rooms.

Even more ominous is the atmosphere created in Toy House and Geometric Pattern. Although the little building is now sheltered by its ample roof, Williams contrasts it with an optically powerful sheet of fiercely patterned paper which has been ‘hanging in my studio for ages.’ Its minimalist, dramatically lit strength is almost overwhelming, and the toy house looks threatened. Equally menacing are the seedheads and other strange objects surrounding the edifice. They look ready to envelop it, and anyone inhabiting the toy house would feel threatened by the views through its windows. Some of these prickly presences bear an ominous resemblance to the Corona virus, and they may well be capable of attacking anyone who strays naively into their domain.

Nothing overtly macabre can be glimpsed in Dolls House, which offers a view of the building unaccompanied by any weird onlookers. But Williams rightly believes that the house ‘has a presence of its own.’ And the windows disclose an interior void which may well imply that no life exists within these silent premises. He increases the feeling of threat by training a spotlight on the left side of the house, thereby enclosing the other side in a strong, dark shadow. The sense of emptiness Williams explores here owes something to his recent experience when ‘I went by train to visit my mentally ill brother.’ The carriages all seemed disconcertingly deserted, and he soon realised that ‘there were more members of staff than passengers on the train.’ 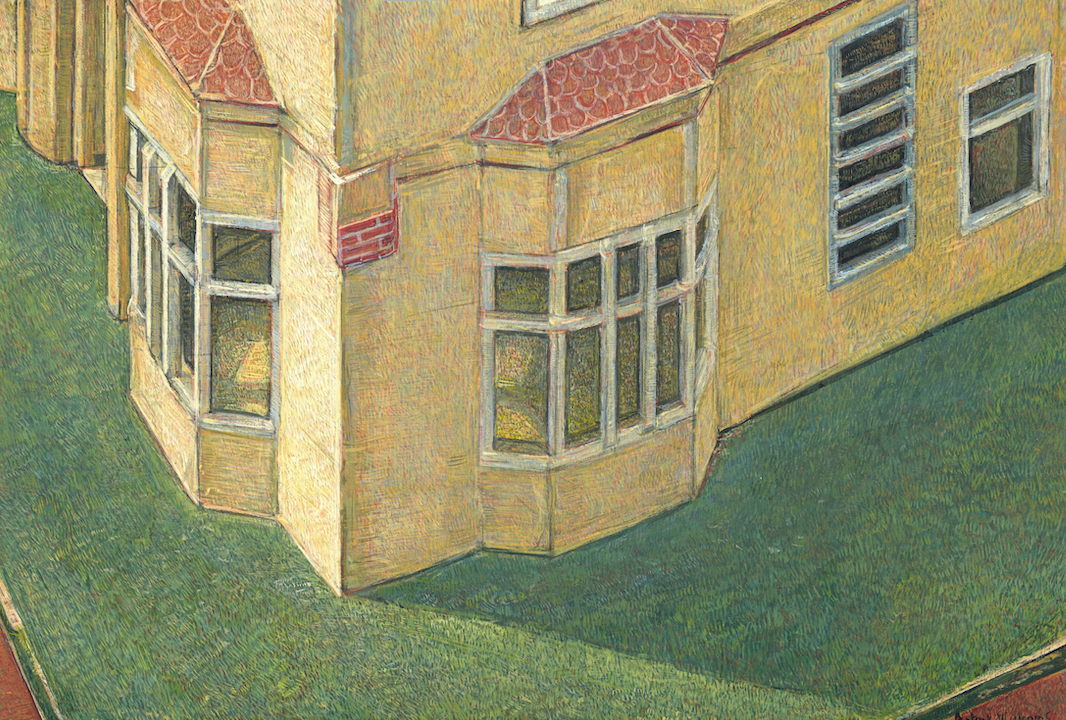 Before now, Williams has never made still life paintings continuously. He believes that ‘they are obviously dictated by the situation we’re in’, and Green Backdrop and Chestnut is dominated at its centre by a dessicated magnolia. The longer we look at it, the more human this macabre form appears. At the top, a frowning face with an open mouth can readily be seen. So the rest of the magnolia begins to resemble a damaged, semi-skeletal body, and the horse chestnut shells are transformed into spiky elements, too. 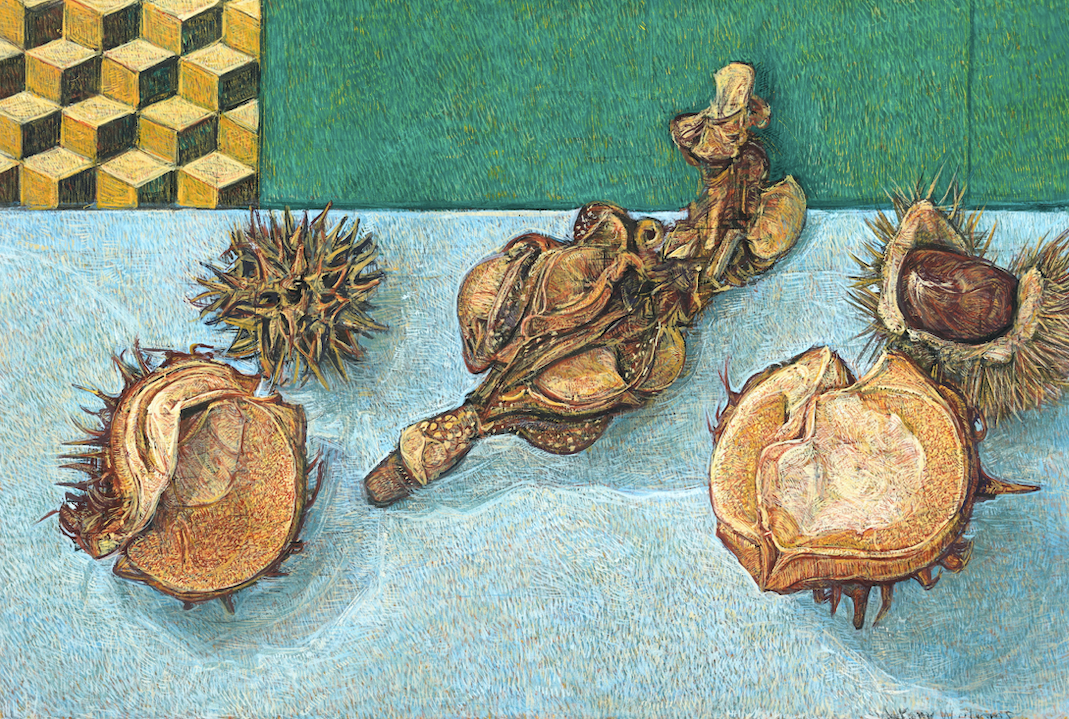 As for the head of the pigeon in Skeleton and Stripes, it bears an eerie resemblance to the masks worn by doctors who treated plague victims several centuries ago. When I ask Williams about this possible connection, he replies: ‘I know exactly what you mean, but I wasn’t intending that.’ He actually discovered his pigeon skeleton after taking down the board which covered a Victorian fireplace. ‘The pigeon probably fell down the chimney by accident’, he says. So this is a painting openly engaging with mortality, and its strong, brightly coloured stripes add to the potent sense of emotional tension. 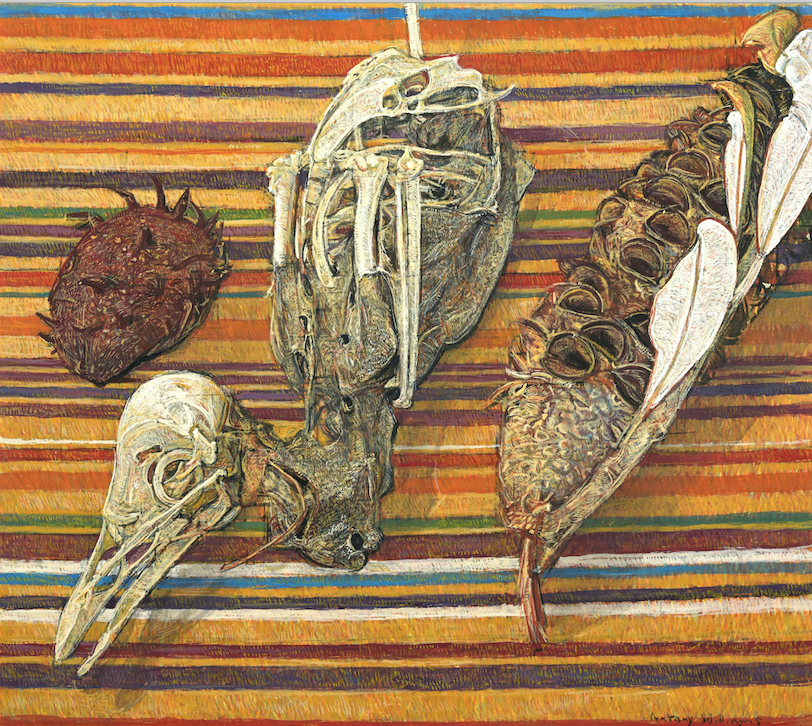 No such colours can be detected in Bird Skeleton and Nest, based on objects given to Williams some time ago.’They’ve just been sitting around with a strangeness about them’, he explains, before adding that the seedhead on the left is ‘a banksia from Australia.’ The earthiness of the entire painting contrasts with the warmer feeling explored in Horse Chestnut and Leaves, which depicts elements on Chobham Common collected by Williams ‘in a bin-liner, before I put them all into a shoe-box.’ Now, released from their confines, they have been carefully laid out and painted with an extraordinary amount of textured detail. The egg tempera medium lends itself to conveying this small-scale intensity, and the overall meaning can surely be summed up by two poignant words: memento mori. Williams’ achievement in creating such heartfelt paintings shows that, despite everything that continues to afflict us during this pandemic nightmare, he has turned it into a fruitful time for art. 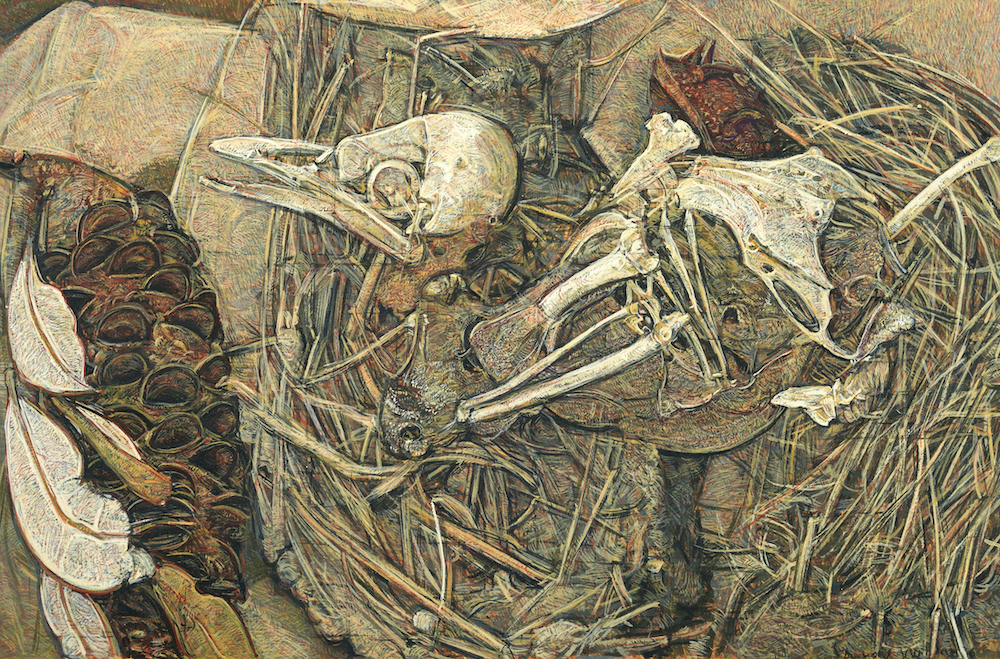 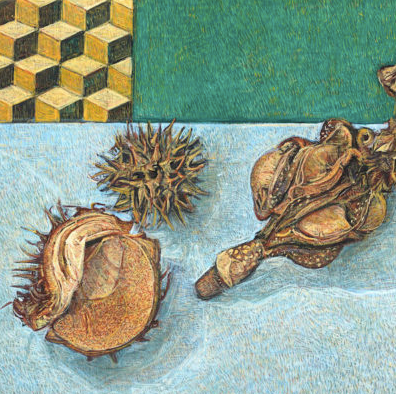 Artist Antony Williams works almost exclusively in egg tempera – a painstaking, exacting medium in which egg is used instead of linseed oil as the binding medium. While oil allows for a degree of flexibility and manipulation of the painted surface before it dries, many days after initial application, this technique does not easily allow for alteration.