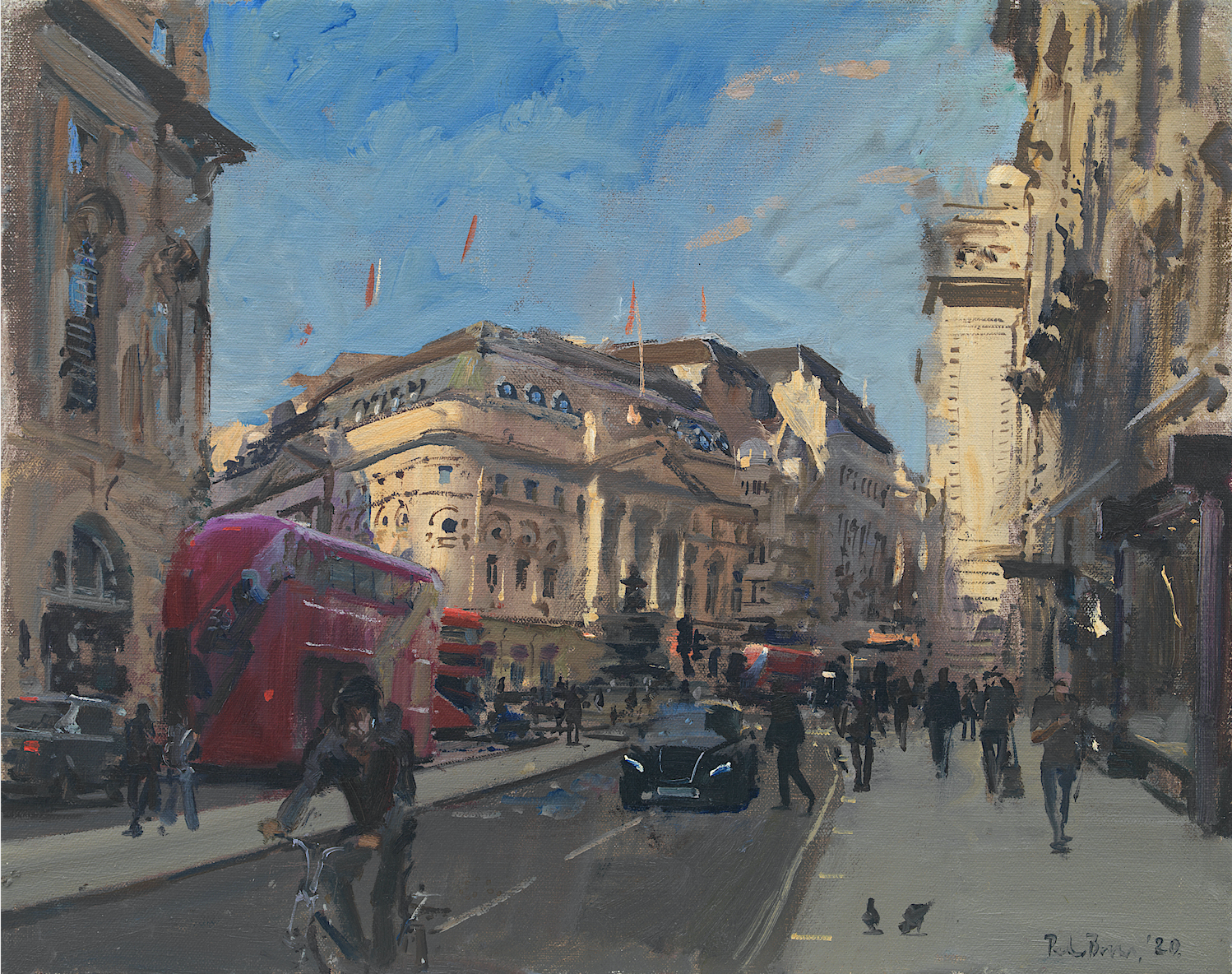 Peter Brown documents the spring and summer of 2020; from the empty streets of London to the masses crammed onto the beaches of the south coast of England. Brown is one of the world’s leading documentary painters. ‘I like to be where the action is,’ he says, and with his unrivalled ability to translate the bustle of human life into fluid and expressive paintings of the utmost poetry, his pictures gain ever increasingly in power. In this exhibition are paintings featuring the quiet interiors of his home and studio in Bath in the west of England peopled by his children craning over their phones in stances almost iconic of a generation, to the melee of colours and chaos of those enjoying the seaside.

In a further contrast are his paintings of the streets of London; no longer thronged with City workers the buildings of Chancery Lane and Fleet Street take on a different tone when viewed unobscured by teeming human life in an almost denuded majesty.‘Usually in Bank or Fleet Street I might see 300,000 people a day but during this period I probably didn’t see more than 200’ he says. ‘London seemed powerful and hugely dramatic.’

Brown first became captivated by urban architecture and how it affects human interaction in Bath, where he studied in the mid-1980s on an art foundation course. After graduating from Manchester Polytechnic, he returned to the streets of the Georgian city, where he painted outside in all weathers. Unlike many painters of his generation Brown welcomes interruptions from the public. ‘We are all social animals and although people can complain about each other the truth is we yearn to be a community and there is great joy in socialising for us.’

Leading up to lockdown, Primrose Hill, 2020

Ella and Me, The Studio

Rose Light self Portrait, The Studio

Ned Back from Bike Ride

Moses and the Magpie

Sea welling up over the gully, Seacombe

From the Beach Huts, end of day

As the tide comes in, end of the day. The Ham, Bantham

To Burgh Island, The Green Umbrella

As the tide rushes in, Trebarwith Strand 2020

Waiting for the tide to relinquish the beach in the Gully

From above Trebarwith Strand towards Tintagel

Wells-next-the-Sea: After the schools go back

From the Beach Huts, Wells-next-the-Sea