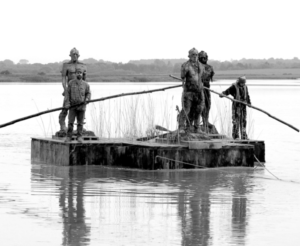 WHENEVER I SEE A NEW WORK BY LAURENCE EDWARDS, I feel I am being confronted by an ancient and archetypal myth: something to do with metamorphosis and transformation and the nature of what it is to be human – part angel and part beast. Men (they are almost always men) emerge from the mud of a first creation, their naked bodies as battered as old trees and festooned with detritus; they stand abandoned on solid ground, weighed down by the awkward and mysterious objects they have apparently agreed to carry; they are trapped like caged birds by the bonds and fences and surreal structures that encircle them. Each one seems to be telling a story that I feel I must have once known, until I realise that they are simply themselves and without a story and it is their expression of utter lostness and abandonment that makes them belong so clearly to our own uncertain time and place in history.

We live in a world in which the old gods have become strangers to us. We might recognise the exhaustion on the lean Medieval face of Christ carrying the cross, but we do not feel the pain of his battered body as if it were our own. We are impressed by the stern presences of the stone guardians of Easter Island, the authority of a Benin mask, the almost unbearable frailty of a human figure carved from walrus ivory, but such images speak to us from another age in which the lessons of awe and amazement, fear and obedience were essential for staying alive and for facing death.

But still we long for the resonance of myth and with that I remember the first shock of seeing the Creek Men: three larger than life bronze figures floating on a bronze boat in the Alde estuary. They seemed like Martians or time-travellers who had forgotten their origins and were therefore unable to go back to where they had come from or forward to where they longed to be.

That was several years ago. I saw them again quite recently, standing at the edge of a lake and staring out through the reeds and I was able to move close to them, to examine their damaged and sad faces and their curiously awkward and helpless bodies. On that same day I also met – if that is the word – the five very recent Walking Men, positioned close to the brow of a small hill, with the shelter of trees in the distance.

The work has become more realistic, the anatomy of each large body vivid with muscle, bone and flesh, feet on the ground, hands clenched, or lifted to grasp at something, shoulders hunched, heads turned warily, looking for any danger that might creep up on them. They stride purposefully and yet somehow hopelessly across the land. The last figure looks over his shoulder at what he has left behind, while the leader figure is resolute in his movement, even though his face is filled with doubt and something like fear. In our modern and apocalyptic age they could be soldiers escaping from the havoc they have caused, or civilians escaping from the havoc that has engulfed them. Whether victim or aggressor, they are powerful and terrified in equal measure.

In that same landscape a solitary figure eight feet tall seems to be walking towards me, carrying an ungainly weight in his arms. He is called Heft and he is holding a bundle of sticks as long as his own body, as if planning to make a shelter with which to protect himself from the elements, or perhaps he has dismantled his home and is in search of a place where he might feel more safe, less threatened. ‘Every inch the king’, says Lear, mad and lost in a storm, but when Gloucester asks if he can kiss his sovereign’s hand, Lear replies, ‘let me wipe it first, for it smells of mortality.’

I first visited Laurence Edwards’s studio some three years ago. At that time he was just starting out on a sequence of double figures and the main work space was occupied by men and women with elongated Cycladic torsos, each couple joined at the hip or leg or down a long flank and struggling to move forward, as if they were being battered by a strong wind in a storm.

The building also holds a warren of small rooms filled to the brim with small pieces, mostly done in plaster; the crowded presence of so many human figures, all permeated with their own energy, all seeming to vie for the attention of their creator. Only one room was without his people and here the walls were hung with elegant and delicate still life paintings that you might mistakenly think were the work of a very different artist.

Later, in post pandemic times, I went to the studio where the big bronzes are made, segment by segment, in an alchemical process of transformation from plaster to wax, from wax to bronze. On most days, ten men and women are busy here in a vast industrial space, but on that day it was empty and silent and I felt as if I was walking through an abandoned and dystopian film set.

I saw the big bronzes in various stages of their evolution, but it was the bronze maquettes that fascinated me most. The smallest ones were standing on shelves against a high white wall, for all the world like books in a bookcase, row upon row of human figures of the imagination, busy with the strange tasks that preoccupied them, all of them trapped in a predicament of one sort or another. The larger ones were balanced on their own plinths, waiting to learn if they were going to be chosen for the next stage of metamorphoses that would make them more amphibious in their nature, part human and part something from another world.

I am suddenly reminded of a visit I made to Tollund Man, the two thousand year old inhabitant of the Bronze Age who was ceremoniously laid down on his side in a hole dug like a grave in a peat bog. Thanks to the chemical reactions within that soupy water, his face was preserved in its every detail, the eyes closed, the mouth set. He looked, as some of Laurence Edwards’s figures look, as if he was caught in a dream from which he would soon awaken.

It is for us to decide what that dream might be.

Award-winning author Julia Blackburn has written two novels, a memoir and thirteen books of non-fiction including: Dreaming the Karoo 2022, Time Song 2019, Threads 2015, The Three of Us 2008 and Old Man Goya 2003.