Tales of Africa: photography and fiction

An introductory essay by Julie Bonzon

I had a farm in Africa, at the foot of Ngong Hills. (…) The geographical position and the height of the land combined to create a landscape that had not its like in all the world. (…) The views were immensely wide. Everything that you saw made for greatness and freedom, and unequalled mobility. (…) In the highlands you woke up in the morning and thought: Here I am, where I ought to be. 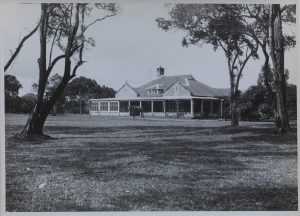 In the introduction to her acclaimed memoir Out of Africa (1937), Danish author Karen Blixen invites the reader to ponder her experience of living in Kenya, then called British East Africa, with a lyrical description of the land. The first lines of the book place and frame Blixen in the landscape – ‘I had a farm’, ‘Here I am’ – and are imbued with a feeling of nostalgia and the author’s longing for a place now out of reach. Blixen was born in the northern region of Copenhagen in 1885 and grew up in an aristocratic family. She married her cousin Baron Bror von Blixen-Finecke and in 1914, emigrated to Kenya with him to buy land with their family’s capital and start a coffee plantation. The farm, named ‘the Karen Coffee Company’, was amongst the largest plantations in Kenya, comprising 600 acres of coffee and 200 acres of corn. For 17 years, Blixen remained in the Ngong Hills, managing the farm alone for ten years after her separation from Blixen-Finecke in 1921. She wrote Out of Africa, published under the masculine pseudonym Isak Dinesen, a few years after the farm’s financial bankruptcy and her return to Denmark. The collection of photographs captured a hundred years ago, now presented by Messums London, offers fascinating counterparts to Karen Blixen’s writing, her reading of the African landscape and self-mythologisation. 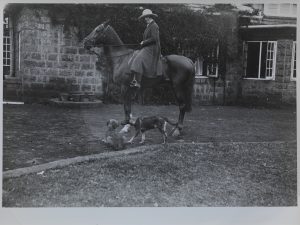 This collection of 15 images was almost entirely produced during Karen Blixen’s stay in Kenya. Stored in albums or sent to her family members in Denmark, the pictures were intended to illustrate her daily life in the farm. The majority of them were taken by her younger brother Thomas Dinesen, who spent several months with Blixen in 1921-1923 and 1924-1925. While in the midst of a career in the military as part of the Royal Highlanders of Canada, Dinesen travelled to Kenya after serving in France in 1918. The pictures forming this collection depict Blixen’s everyday life as seen through her brother’s eyes. A photograph of the main house, used as living quarters and an office, sets the tone for the rest of the collection. Taken from a distance, the house is overshadowed by surrounding trees and abundant vegetation, making its dimensions appear almost modest. The farm looks as a natural component of the landscape, as if the architectural complex had always been here, its presence unquestioned. The displacement of local inhabitants, mostly Masai and Kikuyu, that followed its construction remains undisclosed. Interestingly, the realities of the work at the farm, the factory where the coffee was processed, or the farm workers are absent from Dinesen’s pictures. The political and colonial ramifications of Blixen-Finecke and Blixen’s presence in Kenya are overlooked. Instead, leisurely activities and their projected social values are the favoured subject matter in the collection and what the brother and the sister appear to have been keen to portray and save for their family posterity. 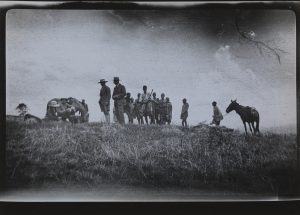 Dinesen’s photographs offer romantic, bucolic and intimate depictions of his sister. Quite ‘static’ – with a compact camera dating from the 1920s, the time exposure had to be relatively long for the pictures to be taken – Blixen’s poses and gestures, together with her relationship with the land, appear carefully orchestrated. One picture depicts her on horseback in front of her house. Smiling and looking straight at the camera, she is seen pulling on her horse’s reins to keep it standing motionless during the image-making process. The portrayal of Blixen as a woman active outdoors is interesting to consider with regards to the historical moment when the scenes were taking place. Close to a time when the women’s suffragette movement fought for women’s rights to vote, succeeding in Denmark in 1915 and the United Kingdom in 1918 and 1928, Blixen fashions her image with an ideal of freedom far removed from submissiveness or obedience. Her adventurous endeavour, later narrated in her memoirs, echoes pictures of hunting scenes in the collection. Together with local guides and her husband Blixen-Finecke, her lover Denys George Finch-Hatton, or on her own, Blixen went on safaris across Kenya and enjoyed for a time the controversial practice of big-game hunting before distancing herself from it. Only one image depicts the author in her domestic interior. She is photographed standing behind the desk from which she wrote correspondence to her family members in Denmark, surrounded by an abundance of paintings, drawings, Victorian antiques and wooden furniture. In this photograph, the pose and the décor appear to conform to traditional tropes of womanhood and constructed norms of ‘respectability’. Framed together with her material possessions, next to the delicately curved cabinet that symbolises her connections with her relatives, the photograph acts as an ingenious reminder of Blixen’s cosmopolitanism and aristocratic upbringing. 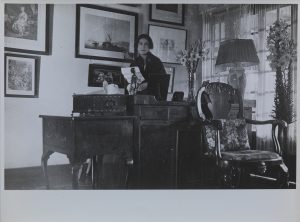 The Karen Blixen collection opens up questions about photography, performance and fiction. Just as the author’s representations oscillate between various pictorial identities – independent, adventurous, aristocrat and cosmopolitan – a few photographs of African ‘natives’ elaborate complex and multiple narratives. Amongst these images, a large number reflect and participate in the constructed representations of Africans as ‘primitive’ or ‘erotic’ by white settlers, cooperating with hierarchical notions of race and culture and filling fantasies projected onto black bodies. One image frames a group of African men as typical representatives of Kikuyu, the largest ethnic group in Kenya. Standing in a row and dressed in traditional clothing pieces, the men are photographed in front of bushes and large tree trunks. The selected location, together with the display of bodies in the space, appear carefully choreographed. As if placed under the spotlight of a theatre stage, a few of them cover their eyes with discomfort, while the animal skin fabric and texture composing their outfits are magnified by the bright sunlight. Signs of urbanisation and so called ‘modernity’, such as Karen Blixen’s farm, are kept out of the frame. Nevertheless, the shadows of a group of individuals, amongst whom the photographer himself, appear in the bottom of the image, breaking the illusion of a ‘natural’, ‘untouched’ and ‘timeless’ representation of the group. The photographer’s intrusion in the frame points to the construction and mechanisms at play in the image-making process, revealing its fabricated nature. Together with Blixen’s bucolic depictions, the photograph fashions a romanticised past, concealing Kenya’s multiple identities and the country’s transforming times. 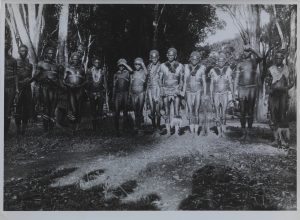 An ambiguous portrait in the collection complicates the rhetorical discourse under which the ‘African subject’ has traditionally been framed, opening up breaks for an alternative reading of the Karen Blixen photographic archive. The photograph is a portrait of Farah, hired by Blixen-Finecke in 1913 and Blixen’s servant during her entire stay in Kenya, together with his two small children. The author of the photograph is unknown. The image was sent to Blixen in Denmark in 1933, two years after she left Kenya. Dressed in a suit and a headscarf, Farah is depicted sitting on a chair in what looks like a garden, in front of a low stone wall and flowerpots. While his older child stands at his side, smiling mischievously to the camera, Farah’s baby is perched on his lap, directing his gaze outside the photographic frame. Delicately tickling the baby’s cheeks, Farah adopts a serious composure while looking straight at the camera. Together with the domestic location, the urban clothes counterbalance the stereotypical depictions of Africans as part of the ‘flora and fauna’. This honorific family portrait challenges a straightforward reading of African subjects as only ‘passive’ or ‘powerless’ recipients of colonial projections. It provides a space for thinking of more reciprocal photographic encounters, a space where African subjects could actively participate in constructing their images. The family portrait reminds us of the friendship between Blixen and her domestic worker with whom she kept extensive correspondence over the years, a nuanced relationship too easily occluded by a quick reading of the photographic archive. 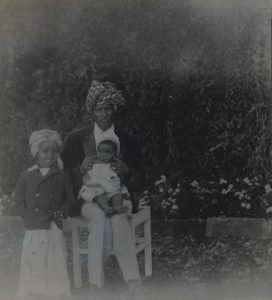 Much more could be written about Karen Blixen, such as the recuperation of her memoirs by the American production ‘Out of Africa’ in 1985 (casting Meryl Streep and Robert Redford as main characters) and the prevailing effects of her lyrical depictions of the African landscape in Western literature, cinematic production and tourist industry in Kenya. One year after the film’s release, Karen Blixen’s house opened to the public. Featuring the original décor, together with props from the film, the Karen Blixen Museum became part of Kenya’s national and cultural heritage. The display of this collection of photographs at Messums London will certainly open doors for further investigation, curatorial practice and artistic response. The Karen Blixen archives allow us to ponder the performative character of photography, encouraging us to consider this medium and literature as equivalent systems of knowledge production, imagination and mystification. As a collection of images, this archive appears to provide more information about Karen Blixen than the subject it actually depicts. It offers a rare insight into how Blixen and her family were imagining and imaged themselves at a time when aristocracy was threatened by industrialisation. The Kenyan landscape narrated through Dinesen’s photographs and Blixen’s writing is framed as a site of utopian fantasies and nostalgic dreams, an ‘untouched’ land against which to construct and fashion their own subjectivities. As a famous author once wrote: ‘The subject of the dream is the dreamer’ (Toni Morrison).

References and suggestions for further reading

Carey Baraka, ‘The Original Karen, Colonial Nostalgia and Nairobi’s Out of Africa Industry’ in The Drift Magazine, 2020.