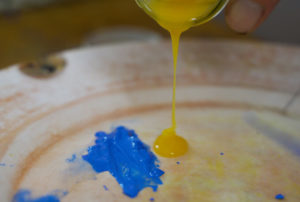 Time’s glory is to calm contending kings,
To unmask falsehood, and bring truth to light [1]

A young woman gazes into a pillow – transfixed, it seems, by the flow of her thoughts.  She inhabits a private world, her expression is impassive, and, although we observe her closely, she is evidently somewhere else.  Her feelings are a mystery and she occupies a different space from ours.  At a further distance, she inhabits a former time.  Antony Williams’s painting of Jacqueline – one of several portraits in the present exhibition completed in the last year – is evidence of long, patient modelling sessions.  Each of the moments that filled weeks and months shared by the artist and model in his studio are now long gone, yet each was preserved as tiny brush marks made by the artist in her presence.  His eyes and hand working in rhythmic harmony, Williams’s visual sensations were transformed into minute, overlapping strokes of paint, and these, collectively, form the enigmatic image that endures.  In this way, the passage of time – no less than his model – is the artist’s elusive subject.

Alongside Williams’s recent portraits, the exhibition also provides glimpses of his long-standing earlier engagement with another kind of individual.  Beginning in 2000, he commenced what would eventually become a series of paintings of his landlady Margaret Robinson, who was then aged eighty.  Williams rented a studio in this elderly lady’s house in Chertsey, Surrey, and their proximity enabled modelling sessions that extended over the next sixteen years, conducted weekly and sometimes on several days each week.

Margaret I 2000, a small, intensely observed head-study, was the first to capture his sitter’s frank features, and it established a pattern.  In common with their progenitor, the subsequent images of Margaret each took almost half a year to finish, a protracted process involving the artist and his model, during which – day by day, and eventually year by year – they both grew older.  Having produced one portrait of her annually, in 2016 Williams put the final touches to what, following her death aged ninety-six, would become the last work in the series.

Ostensibly contrasting, Williams’s representations of Jacqueline and Margaret are products of a distinctive sensibility that unifies his work as a whole.  In the poignant images of his aging sitter, Margaret – unlike his younger model – stares ahead; upright and alert, her composure is nevertheless similarly inscrutable.  Although the portraits present a penetrating and compassionate record of her features and expression, she remains – in common with Jacqueline – an enigma.  Etched with lines and clouded by blemishes, her face is disclosed with unflinching candour, and her furrowed appearance presents an impressive transcript of a life lived.  Yet, abiding questions arise from these scrupulous details: what lies behind the image that confronts us, and what feelings can be deduced from the expression that she wears?

Williams’s scrutiny of his models – forged from prolonged looking – alerts us to every nuance of their physiognomy.   At the same time, he confronts us with an essential, if paradoxical, fact of human interaction, which is that, while a person’s appearance may be intensely revealed, we cannot fathom another individual’s experiences.  Although they are presented in plain sight, their inner life remains hidden.  Eschewing the conventional trope that portraiture unveils a sitter’s character, thoughts and, indeed, their soul, Williams’s means of engagement presents an alternative and arguably truer ethos.  There is a sense that in his paintings, recording appearances is a preoccupation – but this is not all.  Painstaking fidelity to preserving his observations takes place within an even more profound human context, which his work intimates.  In Williams’s art, the passage of time becomes the visible measure of his subjects – and the lens through which he views them.

This, however, was not always the case.  In the late 1980s, Williams’s approach could hardly have been more different from his mature manner.  The influence of an earlier painter, David Bomberg, was apparent in depictions of London that emphasised the substance of oil paint, applied thickly in urgent, gestural brushstrokes.  The energetic drama of Williams’s engagement with his landscape subjects dominated these early works, and he followed Bomberg’s dictum: ‘the hand works at high tension and organises as it simplifies’.  Nevertheless, Williams lacked direction.  It was not until meeting the picture restorer Tim Dolby, who introduced him to an entirely different way of working, that he found a way forward.  Guided by Dolby’s advice, the early 1990s saw Williams’s adoption of egg tempera, a method first employed by European painters in the twelfth and early thirteenth centuries.  From the outset, he was captivated by a technique that invites slow, careful application, and this ethos – as well as the practicalities of the medium – formed the core of his subsequent practice.

Tempera involves pigment ground in egg-yolk, producing a viscous paint which, when applied in semi-transparent layers, is characterised by great luminosity.  Refracting little light, when applied to a ground the colours are both clear and vivid.  However, its quick-drying nature is both a blessing and a limitation: permitting the superimposition of marks and glazes without blending, but preventing the manipulation and merging of individual brushstrokes.  Williams embraced these constraints whole-heartedly, finding in the medium a vehicle that suited a precise build-up of images in the form of small, individual brushstrokes, while employing a pointed brush.

By 1995, Williams had refined his distinctive way of working, and, as his recent portraits attest, it defines a method that he has maintained assiduously – some would say heroically – for over two decades.  At its beginning, there is the encounter with his subject: usually a model or, failing that, a still-life; often, as the recent painting of a reclining nude with a stuffed fox demonstrates, the two are combined.  After the composition has been decided, an under-drawing is committed to a prepared panel and from then on it is, as the resulting image makes clear, a matter of time. This, it could be said, is true of painters in general, many of whom spend a significant part of their daily life in the studio.  In Williams’s case, however, the process is made visible.  The experience of looking, recording and constructing is manifest in the infinitesimal detail of his surfaces: a fragile network of hatched colour-marks that, in effect, forms the fabric of appearance.

In this respect, Williams’s concerns transcend the straight-forward depiction of his observed subject, evoking instead the activity of seeing.  His method recalls the pointillist technique associated with such painters as Seurat.  The skin of Williams’s reclining nude has been broken down into separate marks, each a unit of colour sensation that the eye mixes optically.  However, his approach goes far beyond Neo-Impressionism and, surprisingly, recalls his earlier involvement with Bomberg’s ideas.  At the beginning of recording his visual impressions, William’s hand – like the earlier gestural painter – moves at speed and in a continuous flow, noting his manifold sensations.  Each mark is a tiny gesture, the product of nervous energy, and is formed in a second.  Later in the process, Williams’s application of brushstrokes becomes slower and more deliberate.  In this way, the surfaces of his paintings recall palimpsests – tablets on which the graphic evidence of thought, feeling and optical excitement is superimposed.  We read these marks not only in terms of optical fusion, but sense the succession of moments that produced them – now extinguished – trapped in the delicate facture of paint.

Ultimately, the experience of looking at Williams’s images is complex.  Viewed from a distance, individual marks are less apparent.  Instead, expanses of colour, larger shapes and each composition’s overall design emerge, asserting a clear order.  Indeed, an uncanny stillness pervades his subject matter, echoing the work of that earlier exponent of tempera, Piero della Francesca.  In common with the Renaissance master, Williams’s paintings suggest an instant of arrested time.  In Piero’s Baptism of Christ, for example, the flux of light and movements of figures have been stilled, the surface of water is undisturbed, and a dove hangs in the air, as if suspended.  The picture’s tranquil centre is formed by the palms of Christ’s hands, which touch – forming a small aperture.  In similar vein, Williams’s portrait of Gyles Brandreth depicts him kneeling, acting the role of Claudius in Shakespeare’s Hamlet, his hands also joined in prayer.  The inclusion of a glass of water on the mantelpiece behind the figure introduces a point of cool repose, refracting light with simple truth.  In both paintings, the moment appears frozen, investing the scene with a compelling calm.

Williams’s representations are, however, not confined to generating a single impression, but yield unsuspected depths.  As the viewer approaches each picture, a field of manifold marks emerges anew and commands attention.   The eye traverses the painting’s surface, and, as it does so, stillness is banished – replaced by animation and a sense of the artist’s brush as it danced in pursuit of fugitive sensations.  Each portrait is enlivened by our engagement with these tiny units of energy, and, as a result, the illusion of a stopped moment is laid bare.  Instead, we witness the flux of experience – as participants in the lively current of time.