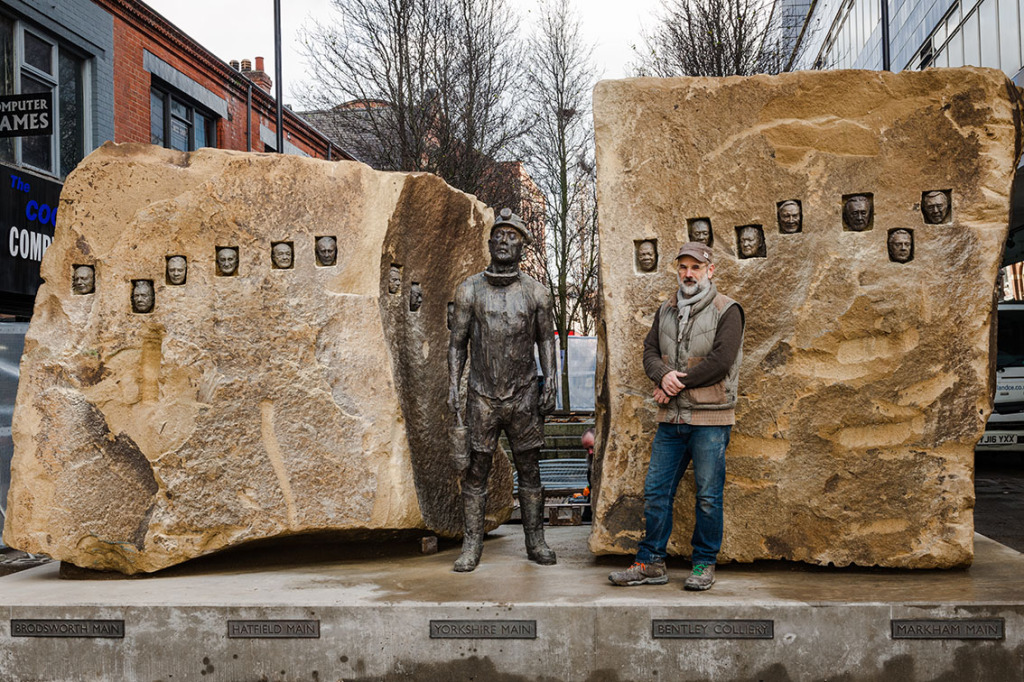 In 2018 Edwards was awarded a commission by Doncaster Council to create a sculpture that celebrates the lives of those who had worked in the pits around Doncaster. Before this commission, there was nothing in Doncaster to show that it was a mining community or had any mining history. Joan Hart who was one of those who sat for their portrait stated that miners were “a unique breed of men” and that it was important to have something to remember the miners by. For Laurence, the commission seemed right as miners are the literal embodiment of men of the earth, a theme that Laurence explores in his sculptures. He also felt that it would be a great test for a southerner to engage with a “northern community” and great a sculpture that would engage with the community that is in many ways still in trauma.

The sculpture consists of 40 portraits of former miners, whom Edwards sculpted in wax while they told their stories. These sessions were filmed by Doncaster College to form part of an online archive.

“The conversation always started with introductions and basic biographical facts, the dialogue flowed naturally after that, with silences being embraced, the spaces allowed me time to look properly.”

In February 2021, A Rich Seam was installed in Doncaster City centre. The bronze faces sit in hand made crevices of two 20 tonne pieces of York Stone from Huddersfield, with a central miner figure between them. Seam refers to Barnsley Bed which Doncaster sits on and from which coal was mined. Coal has been mined in Yorkshire since potentially the Roman times, but exponentially increased from the 18th century due to the invention of the steam engine in 1712. During the industrial period and due to the building of the Liverpool to Leeds canal the amount of coal being mined in Yorkshire increased exponentially as it could be transported easily to other areas of Britain. However, with the increase in competition from foreign companies and the increased privatisation mines began closing, stripping many towns of their identity and purpose.

Laurence went up to the region around Doncaster and spoke to miners and their families about mining and how its loss had affected their community. What stood out to him was the passion and commonalities between the testimonies.

“All spoke of camaraderie, of the danger, of death and of community and the real sense of loss which is impossible to grasp. One miner said to me imagine the government closing ‘Art’ down, stopping you doing it ever again, then imagine a city full of artists.”

He moulded each portrait out of yellow wax with his hands, as the individuals spoke. Laurence would see three individuals a day and each sitting would last two hours. Each finished bronze portrait sits in a niche cut into Yorkshire stone, which Laurence calls “faces in the rock”. For Laurence Edwards, this was a “jump into the unknown” because the initial sittings were timed a filmed all while he was interviewing the subjects. The central figure is Listening Miner which is meant to be evocative of how the men would hear the geology settle at the end of the shift as the machines were turned off.

The sculpture now stands outside the Frenchgate Centre to show how literally mining is to Doncaster. Councillor Nigel Ball wanted to “locate the iconic piece of art right in the heart of Doncaster – a celebration of our mining history and the huge spirit of our miners and their communities.”