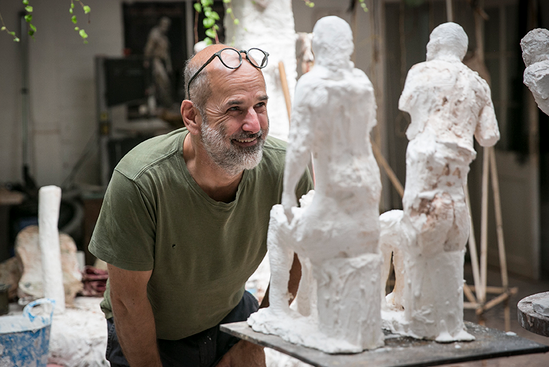 Well this is my opportunity to show the world what I made during Lockdown. I managed after a faltering start to get quite a bit done..

I suffered the anxiety of suddenly having a load of time with the business shut down. I couldn’t escape the feeling that in this ‘historic incredible time’ everything had to be brilliant, salient, relevant and about the now.. so after a series of works based on bog rolls and grabbing everything in the supermarket I gave up.. 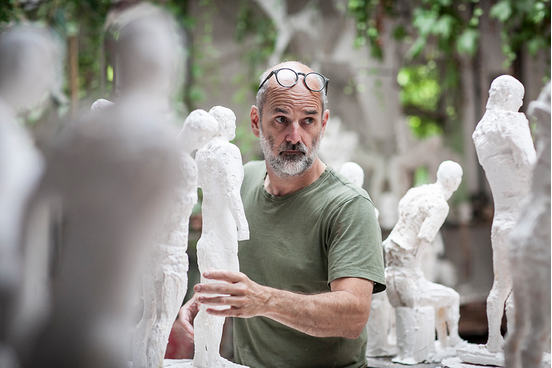 I started work on studio repairs, plastering the walls putting shelves up painting, tiling you know the sort of thing.. then! There was plaster left over in buckets that had to be used, (Can’t stand waste) I started to fill random moulds around the studio with the excess..

After a few weeks I’d inadvertently built up a collection of figure sculptures in plaster.. I remembered that i’d been intrigued by the scaling up process we used for the giant sculpture we are making, (see previous blogs) slicing up the plaster on the bandsaw. I thought i’d play with that.. so I started to slice up all the plasters i’d made on the bandsaw.

I soon had stacks of diced figures precariously balancing all over the place (and a rusty bandsaw!) I thought i’d amalgamate different figures, two or three at a time, pile them up to form stretched elongated figure forms.. I glued the first one up using plaster and was shocked by the strange stretched form i’d created.. During the following days I stacked and stuck figure after figure. Soon a crowd of figures populated the room (under the gaze of this torso i’d suspended from the ceiling a while back and had forgotten about), They all looked unnervingly in one direction, as though trying to work out a thing, a future, a strange place.

Every morning I entered the studio there they were querulously spying me, working me out, peering, leering looking over each others shoulders, through gaps, like a colony of Meerkat’s. Couples leaning together, mimicking each others poses, some holding hands, nervously comforting each other.

Half way through this I heard on the radio that the magnetic north pole had moved a few degrees from Alaska to Siberia.. all the navigational systems of the world had to re calibrate, this chimed perfectly with the leaning skewed figures I was making, standing as if on a tilting earth, compensating, trying to accommodate change.

I should shut up now and give you some pictures.. taken by Bill Jackson and Tim Bowden..

Here’s how the studio looked on entry every morning, greenery bursting through an open window, now impossible to shut!! 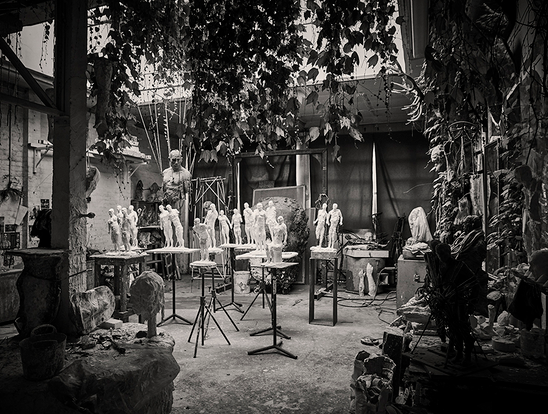 It was like a set from Midsummer nights dream.. no not midsummer murders! 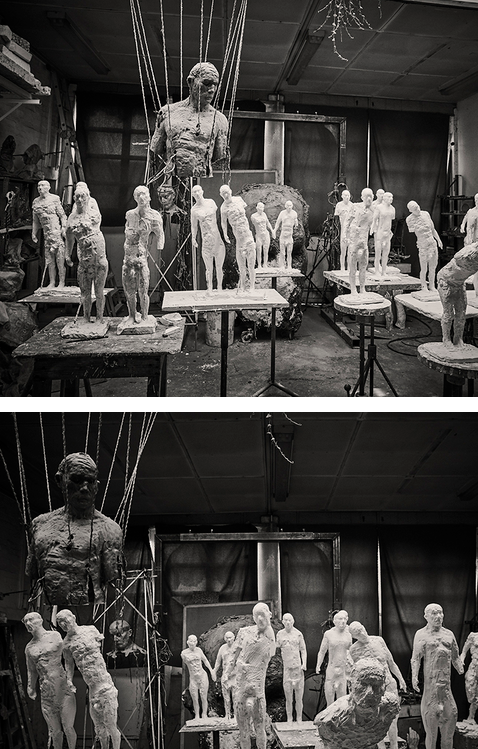 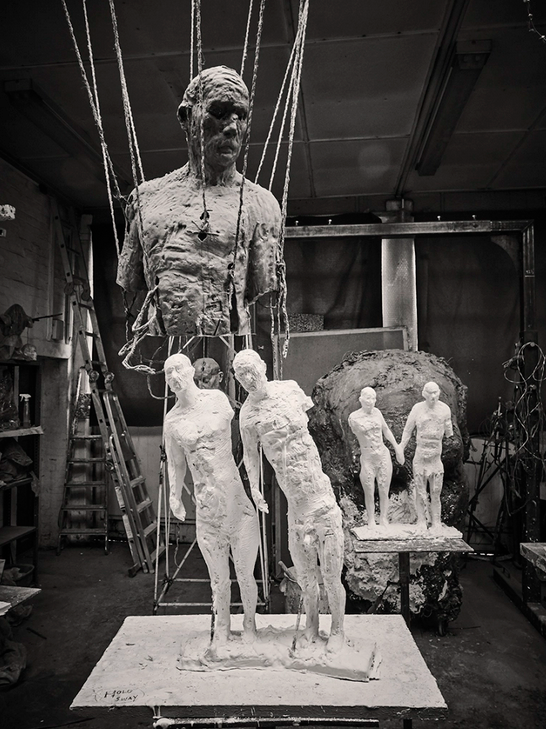 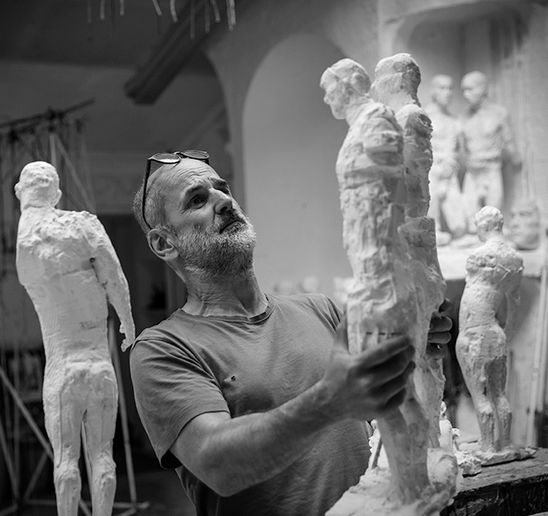 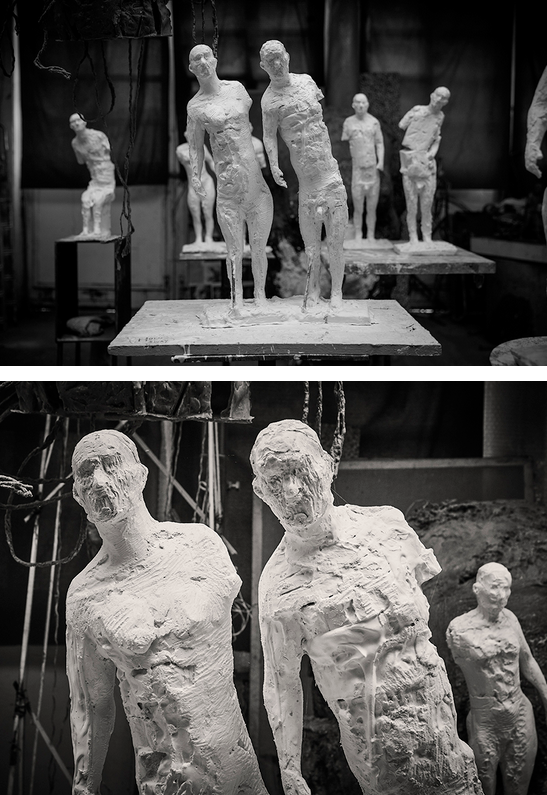 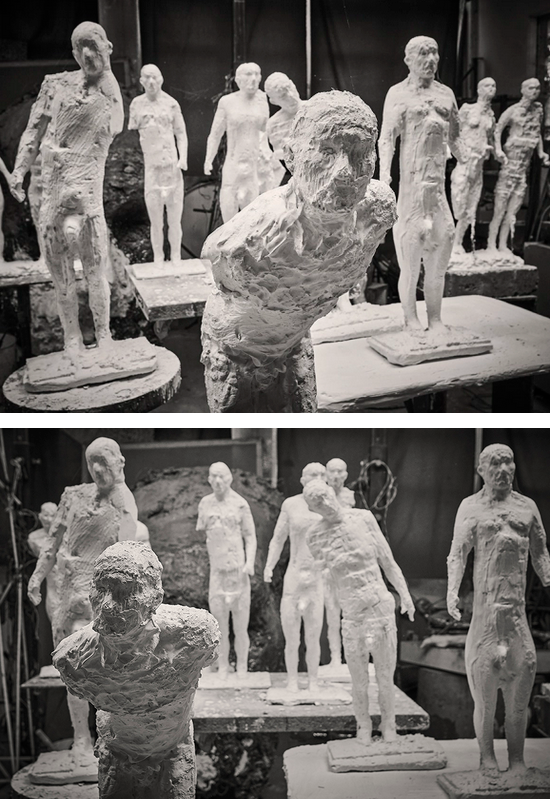 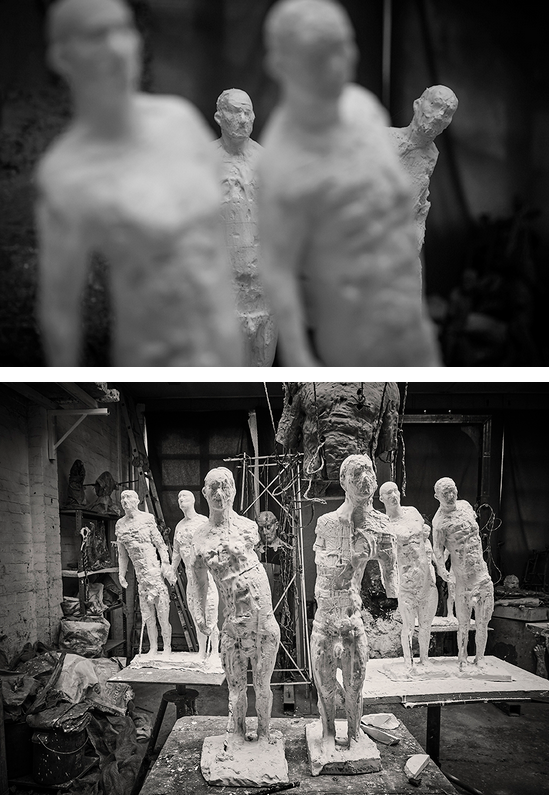 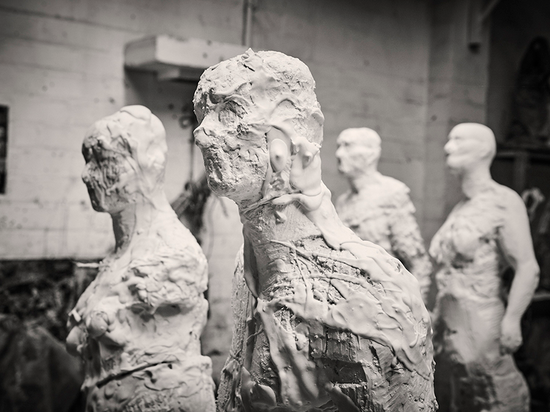 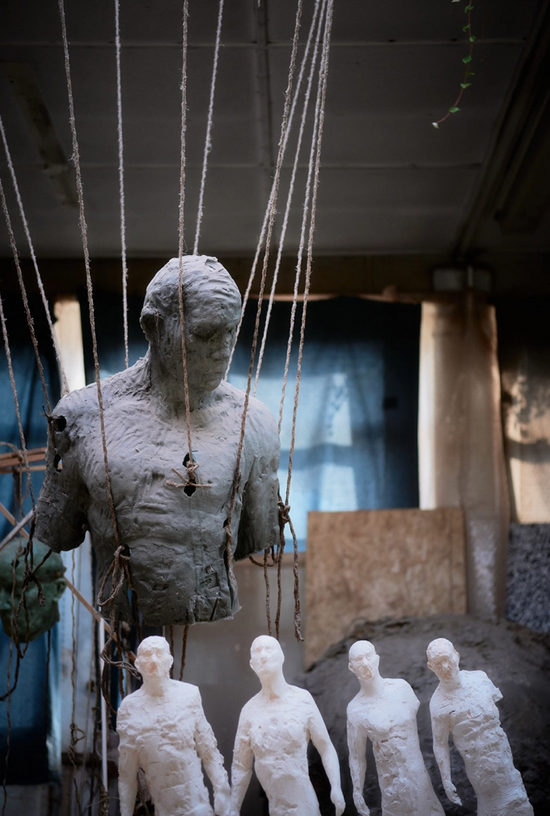 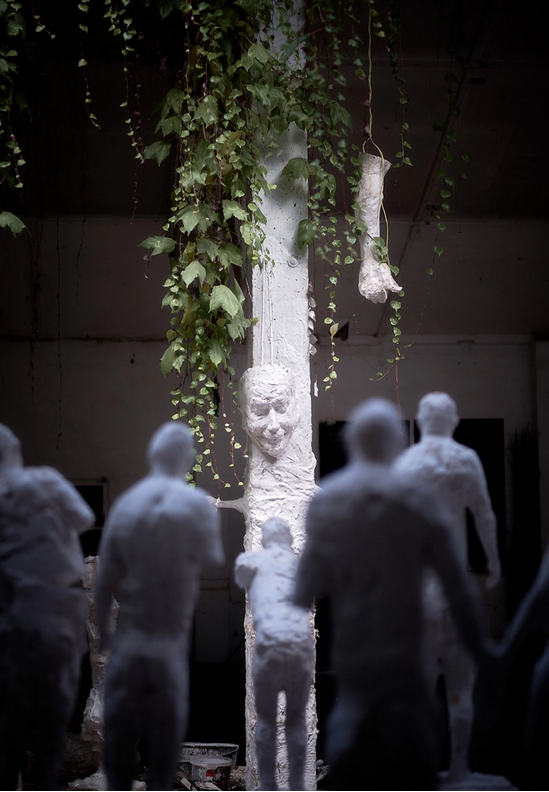 Here’s a couple of shots from guest photographer Claire Waddell!!

Ok here are some ‘Individual’s’ by Tim.. 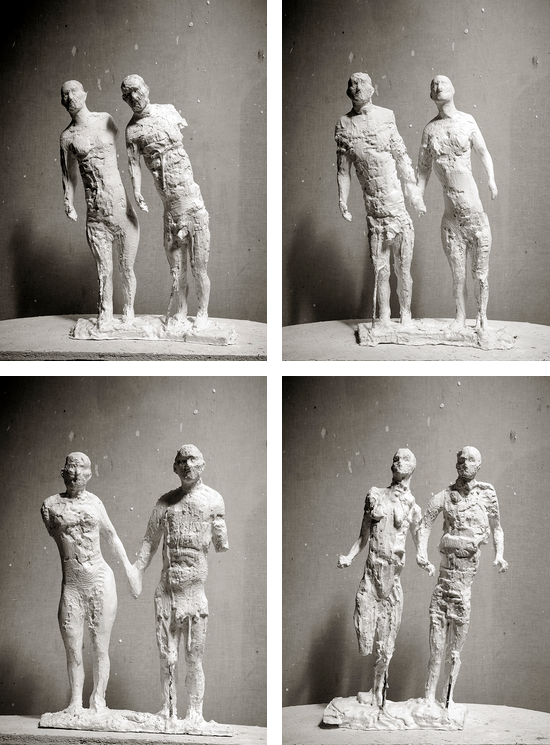 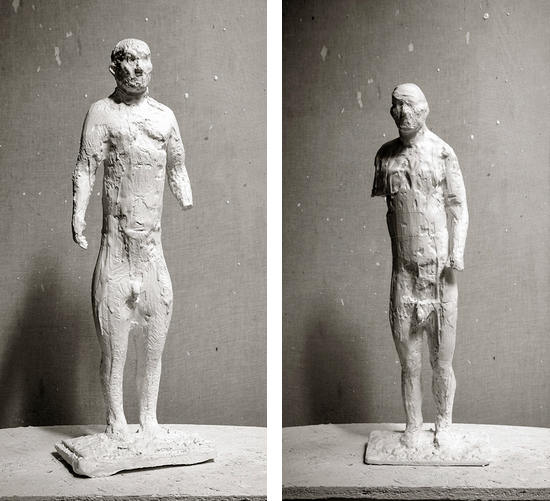 I have to say, I feel like they are friends, we’ve been through a lot together.. 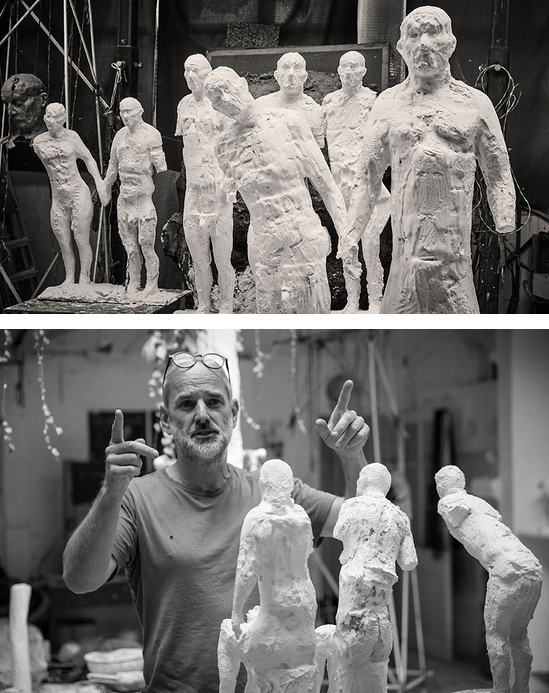 Johnny from the gallery loved them too, so we are going to show them in the London space next spring.. we think we’ll show all the plasters in one room, set up as in the studio and then a load of them in bronze in the next room.. It will be very interesting to be able to compare and contrast.

Other things happened in the studio too, it was a creative time.. I’m not going to bore you with loads of intellectual explanations.. you can do all that.. I’ll just show you some images!

Love the idea of tiling a room and camouflaging life size figures. 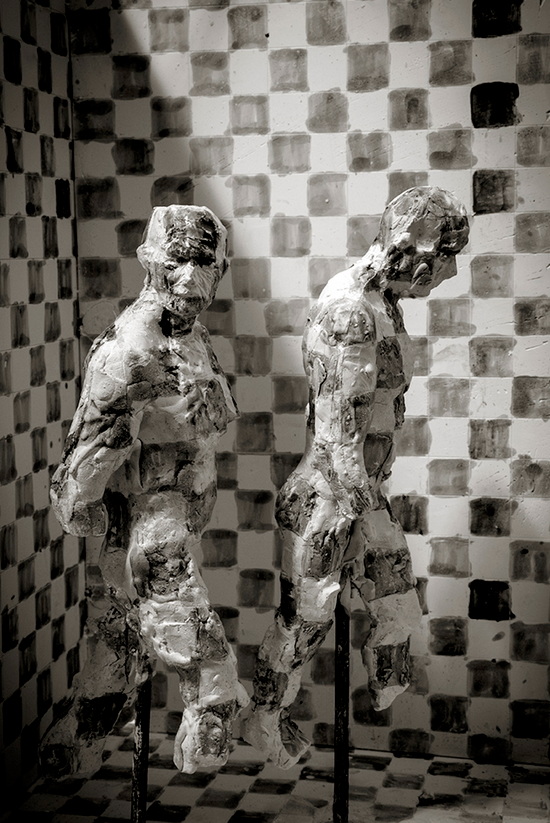 I collected these ancient Limpet shells out of eroding cliffs, had to use them! 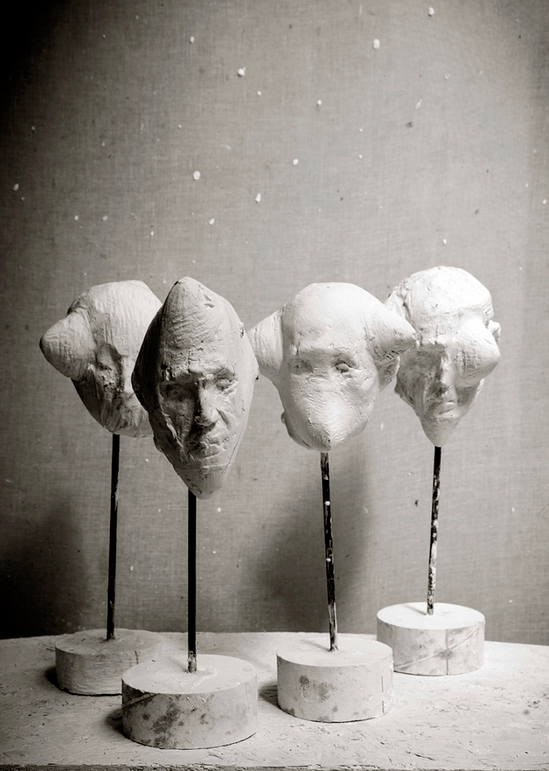 This was my first Covid sculpture, I had it wafting past walking men, like a will o-the-wisp. I imagine it massive so you can walk under it.

It came from this guy, I used all the off-cuts under the band saw.. 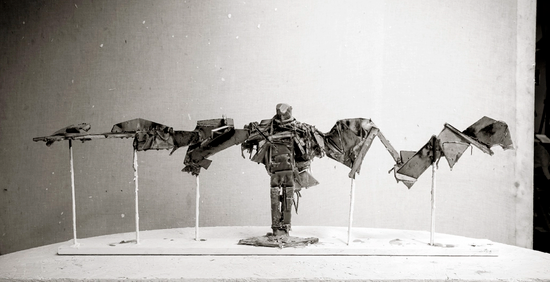 And this guy from all the off-cuts I found behind a shelf! 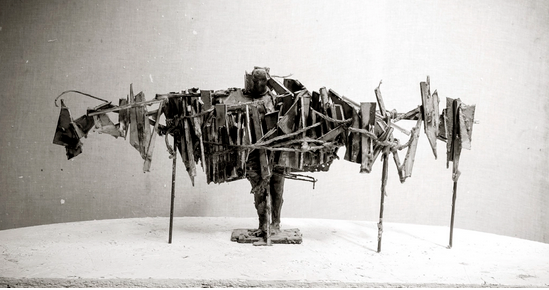 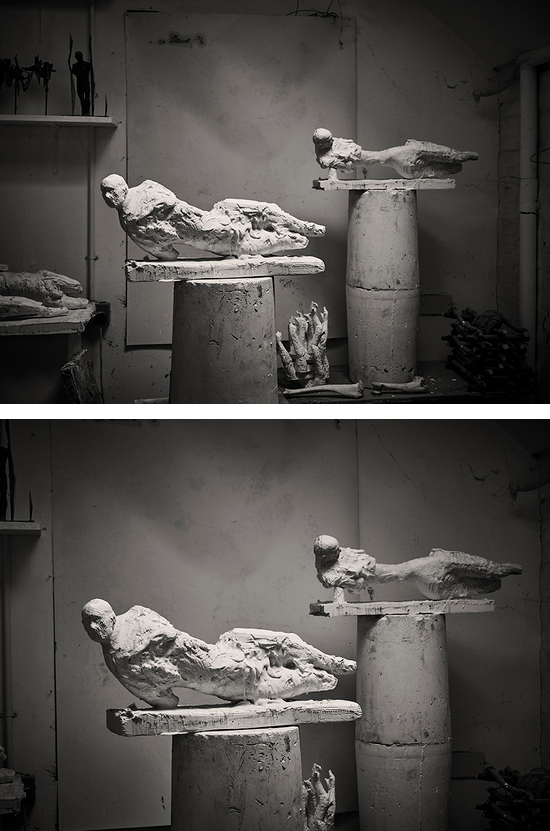 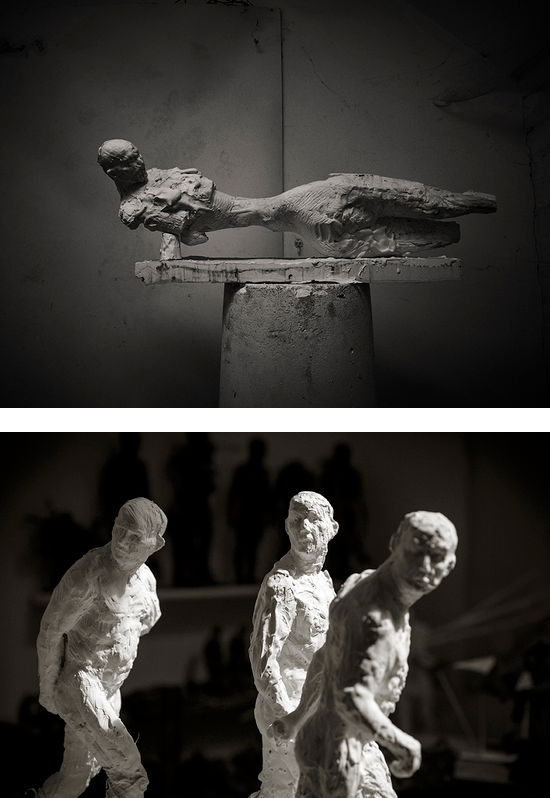 Modelling a series of walking men, all to be scaled up to 8 ft high, a fantastic commission, a small selection in great light.

So you can leave me now, talking to my new friends.. don’t worry i’ll be fine.. 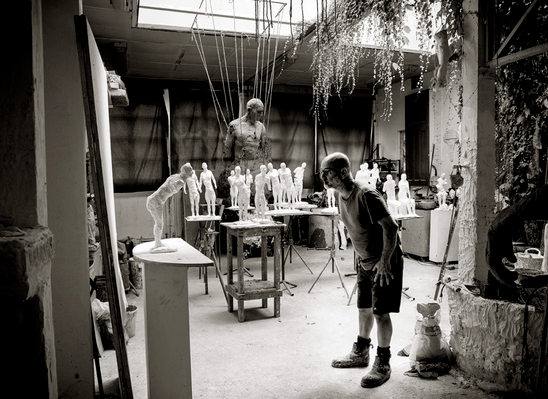 Take good care of yourelf.. we got a long way to go…