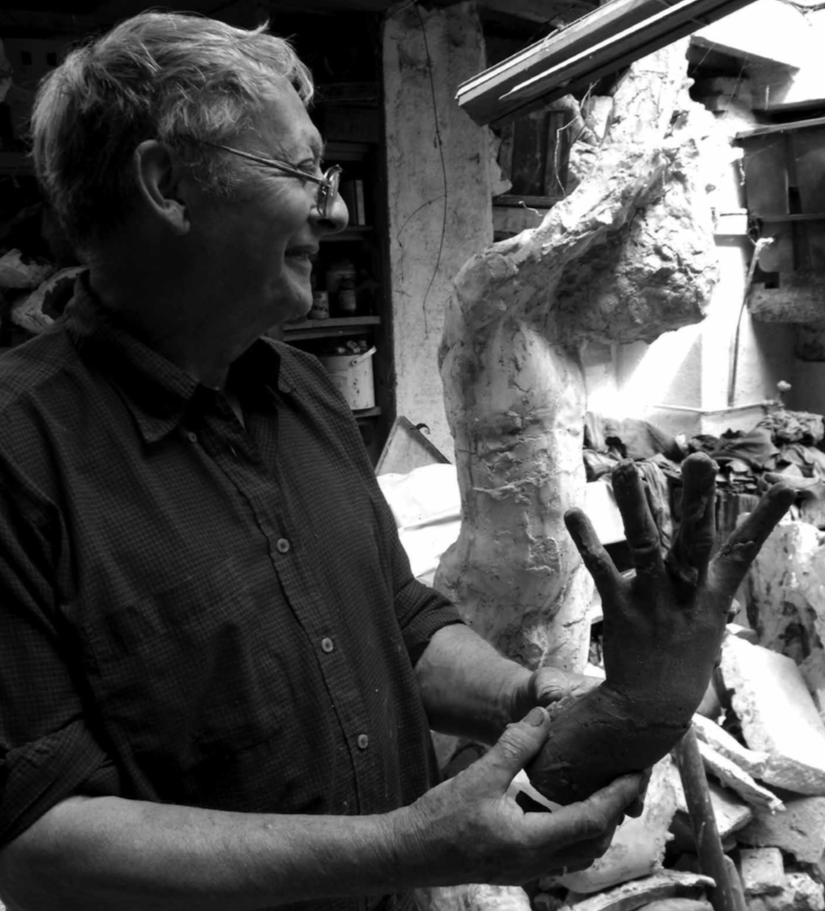 Taylor was born in 1935, the oldest of three children, to a poor, working-class family. Perpetually drawing, even whilst avidly reading his library books, he was encouraged by his school art teacher and a career in the arts seemed likely, if not inevitable. After time spent at Epsom and Ewell School of Art and Crafts, Taylor was persuaded to apply to the Slade School of Arts in London. In his application Taylor wrote that he was interested in “the study of people; their psychology, character and way of life” – concerns which certainly manifested in his work. In 1954 Taylor successfully enrolled for the Slade’s Diploma in Fine Art but ‘reacted immediately and vehemently to what he perceived as an elitist, public school atmosphere’, at odds with his humble and hardworking background. Adjustments remained difficult throughout this period of schooling. He loved to work from life but found the discipline of the life-room at the school impossible. He developed an intuitive, individualistic response to the model, which, remarkably, his teachers found unacceptable.

During Taylor’s second year at the Slade Henry Moore was to visit a teacher-friend. Moore’s praise for Taylor’s independent vision marked a ‘turning point in the way his work was perceived by the school’. It is said that Taylor established an immediate rapport with Moore, saying that the ingenious sculptor was a “Yorkshire man who spoke to me directly”. One a living legend and the other a novice, the pair found companionship through their mutual interest in the formal power of early sculpture. Indeed, Taylor often frequented the British Museum to look at Archaic, early Greek, Persian and Babylonian work.

Taylor won myriad prizes as a student; the life-size clay nude Boy from Antigua earned him the Rome Prize – a three-year scholarship to the Italian capital. A wonderful anecdote records Taylor having to hire a sex worker at 500 lire an hour as the Slade refused to give him extra funds for a professional life model. He was mesmerised by the city’s art collections, modern and ancient alike, including specific examples of the Belvedere Torso as well as the oeuvre of modernist sculptor Medardo Rosso.

Taylor only rarely exhibited his sculptures publicly since the early 1960s and they remain best known to a select circle of friends, patrons and enthusiasts. In 1998 Taylor was elected a member of the Society of Portrait Sculptors and the Royal Society of British Sculptors.

The powerful inspiration provided by Italy played a crucial part in Brian Taylor’s life as an artist. After he
studied at the Slade School of Art in the mid-1950s, his prowess as a sculptor of the human figure was so
impressive that he gained a covetable three-year scholarship to Rome. The artworks Taylor encountered
there stimulated him enormously, ranging from classical sculpture right through to early twentieth-century
modernism. He became obsessed by the challenge of carving a life-size male figure, concentrating above
all on its essential vitality. And the Director of the Courtauld Institute, Anthony Blunt, responded to Taylor’s
ambition by providing him with a substantial block of travertine marble. So he was able to create a freely
handled sculpture of a man pulling his shirt off, and in 1960 Taylor’s precocious dexterity earned him a solo
exhibition in Rome.

For several years he lingered there, learning even more by working as a studio assistant for the immensely
successful Italian sculptor Emilio Greco. But London’s rapidly increasing vivacity during the Swinging Sixties
persuaded Taylor to return there, and he began his distinguished teaching career at Camberwell School of
Art in 1965. Although sculpture was always his primary focus, he emphasised the fundamental role played
by drawing as well. Close, first-hand scrutiny of human faces and bodies remained immensely important
to him, and yet Taylor was also fascinated by a far more traumatised vision of life. As a teenager he had,
tragically, suffered a severe mental breakdown which led him to attempt suicide. Both drawing and painting
helped him to recover in hospital, and even during the late 1960s he still found stimulus in scrutinising
people as unstable as Lily Pier, a former Camberwell student who gave vent to her anguish by screaming
and weeping. The Dance of Lily Pier, an arresting bronze which vividly conveys her spiritual torment, shows
just how deeply Taylor comprehended mental distress.

Italy, however, called him back in 1971, and he could not resist an impulse to visit the Serra di Burano.
This alluring rural area, not far from Umbria, enabled him to study horses – in particular an unusually large
and well-built animal strong enough to run even when pulling a very hefty cart. Although this pugnacious
creature threatened to bite Taylor, he insisted on studying the mighty horse at close quarters. He cunningly
distracted the animal by flinging wet clay onto its nose. And while the horse licked off this muddy substance,
Taylor took detailed measurements of its head and body without suffering any assault at all.

As a result of these adroit manoeuvres, he was ready in 1972 to create the major bronze sculpture Burano
Horse. Its title paid tribute to the countryside he relished in the seductive valley of Santa Maria di Burano,
as well as the animal he had discovered there. Enchanted by his explorations of this terrain, while staying
near the church of San Sepulchro with peasant farmers, Taylor made sure he returned to this compelling
district time and again over a twenty-year period. During these visits he worked on a monumental sculpture
paying homage, above all, to Piero della Francesca, who in the fifteenth-century painted two interlinked
images called The Triumph of Battista Sforza and The Triumph of Federico da Montefeltro. In both these
celebratory works, elaborate chariots are depicted as they proceed along a route high in a panoramic,
luminous landscape. Although Taylor never completed the entire sculpture, he intended it to contain lifesize
images of figures as well as animals. But several of these bronzes were finished, including oxen, cows
and even a bull. With characteristic intensity and dedication, he based them on his own careful scrutiny of
Italian animals found in a barn.

Even so, the disturbed area of his mind never went away. Back in the 1950s, as a teenager struggling to
recover from his breakdown, he had become obsessed by Dostoyevsky’s alarming fiction as well as the
end-of-the-world terror generated by The Four Horsemen of the Apocalypse. And now, in the latter part of
his life, he conceived an uncompromising multi-part sculpture entitled The Death Cart. Taylor never lost his
profound awareness of mortality, and succeeded here in creating several figures who testify to a heartfelt
preoccupation with the fundamental vulnerability of our existence on this mysterious planet. 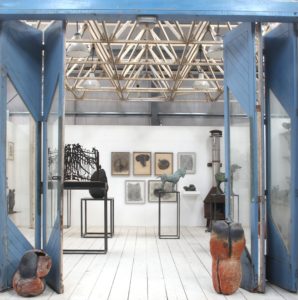 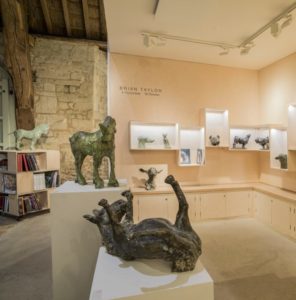 ‘Animalia’ & Drawings from the Gabo Studio 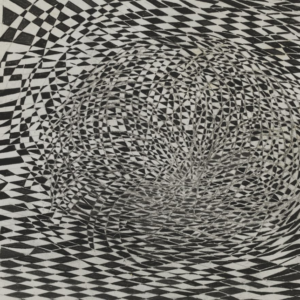 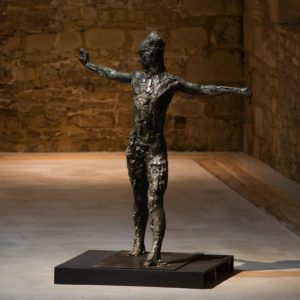