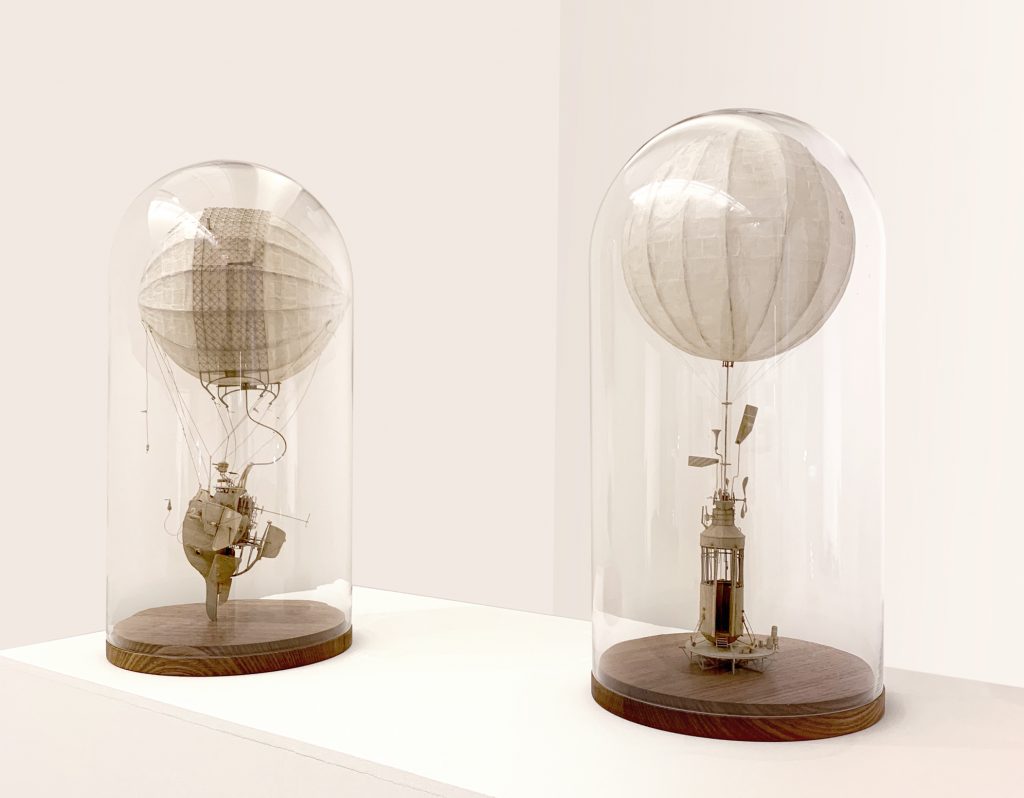 Visiting Messums London is by appointment

Daniel Agdag is an artist, sculptor and animator based in Melbourne, Australia, whose work represents a paradox of fragility and strength through structures of miniature might in delicate materials.

Intentionally keeping his process very simple, but the outcome very complex, Daniel uses only boxboard, glue and a scalpel in order to become the architect of an extremely intricate universe and we are delighted to welcome him back for his second solo show with the gallery this September.

Daniel’s sculptures sputter with electric sound, they follow an internal logic where every crank, pully and cog has a functioning role. They hold a presence in the room as if, when one leaves through the door, they begin to whir and hum with kinetic energy.

When observing this new body of work – ‘Radio Silence’ – which is more elaborate and intricate than ever, you get the sense that there is a transmission but that it is one of silence. There is a technological sophistication to this progression, and one that is reflected in the pause that has interrupted the lives of everyone in recent months.

There is no attempt to conceal the raw materials of this universe. The boxboard lends his sculptures and sets ‘a romantic, sepia filled, glowy aspect’ – their old-fashioned monochromatic nature allows the viewer to hone in on the striking and beautiful detail of their construction.

Daniel spends a lot of time within the urban environment, sitting just outside of it, so that he can observe and absorb the man-made world that we exist within to feed his curiosity and to, as he says, ‘make order out of chaos’.

He says he is trying to bring the beauty of the urban environment to people’s attention, saying, ‘look at these complex systems, they allow you to have a life, they allow you to live in a very complex civilisation where you are able to participate in things that you might never have been able to do so without the introduction of these machines and these technologies.’

Working during lockdown – and moving his ‘studio’ to his one-bedroom apartment – this new body of sculptures has been made in an isolated room in Melbourne, where he would sometimes pull out a scalpel in the middle of the night to carry on working. From this isolation, he has created world around himself that is both aesthetically pleasing and also a form of escape. He works intuitively, with no preliminary drawing and says, ‘I don’t start off with an idea of the full piece in its entirety, it’s always in flux, everything is on the fly, nothing is set in stone at any point throughout the process.’ The result is a fascinating insight in to the wonderful world of Daniel Agdag, and we are delighted to be a part of it.