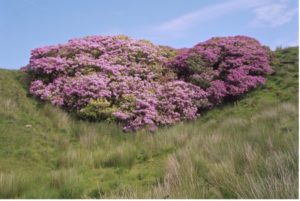 Messums London presents the first solo exhibition by British-Chinese photographer, Yan Wang Preston in London with three major bodies of work Mother River, Forest, With Love. From an Invader. and part of the most recent series autumn, winter, spring and summer.

Curated by Johnny Messum & Zelda Cheatle, the exhibition introduces the epic journey that was Mother River. A breakthrough body of work in Preston’s practice that excavates her relationship with landscape and its undercurrents from representation. Identity, colonial history, migration and most recently, the closest link, the body.

Dr Yan Wang Preston is a British-Chinese artist interested in the intercultural connections between landscape, identity and migration.  Her work has won many international awards such as the 1st Prize, Syngenta Photography Award and the 1st Prize, Professional Landscape, 2019 Sony World Photography Awards. She has exhibited widely and internationally at venues including Jeddah Photo 2022, Fotofest Biennial 2020, USA, Gallery of Photography Ireland, the 56th Venice Biennale and Chongqing China Three Gorges Museum.

by Charlotte Jansen, journalist and author

While painstakingly dissecting seventy-six stillborn buds gathered from a single Rhododendron tree in the hostile winter of 2020, Yan Wang Preston had an epiphany: “I am indeed a woman, living in a postcolonial, patriarchal society.” During the slow, meditative process of making the Winter chapter of the work ‘With Love from an Invader’, Wang Preston found herself facing her past. “As a Chinese girl, I was always told what to do by my father” the artist, who studied medicine and practiced as an anaesthetist in Shanghai before moving to the UK in 2005 and pursuing photography. “His way of running his family isn’t very different to the way society in general controls women. I felt that very deeply when I finished dissecting those buds.”

Wang Preston’s epic and emotive photo-based works of the last decade, represented in three interconnected bodies of work in the artist’s first exhibition at MESSUMS Londonessums, ‘Yan Wang Preston: With Love’ grapple tirelessly and imaginatively with the ways our relationship to the landscape is gendered and cultured. Each project is the result of a physically and emotionally intensive process in which Wang Preston attempts to re-establish this relationship to the earth by embedding her body further within it, finding in the ecology a mirror of society, reconciling the patterns of the natural with the problems of the human.

Such is the case in ‘With Love. Ffrom An Invader’, the result of 182 ritualistic visits to the same Rhododendron, on the crest of a hill not far from Wang Preston’s home and studio in the South Pennines. The Rhododendron flourishes in glossy, verdant splendour and blooms into brilliant, defiant pink; in the winter it is covered with a cloak of powdery snow. With the patience of a Tibetan Monk creating a sand mandala, Wang Preston photographed the effects of the shifting seasons on the evergreen shrub, portraying it with soaring empathy. The history of the Rhododendron resonated profoundly with Wang Preston: defined as a ‘non-native invasive species’, it was first introduced to the UK from Gibraltar in the mid-1700s and sold at markets for its beauty as a flowering pot plant; but it is now characterized as a threat to other species, and therefore unwelcome. The work is critical of the “completely false notion of a native ecology – nativity itself is a colonial concept”, as Wang Preston puts it, making evident the way the earth accommodates itself as a hospitable habitat, where growth happens contrary to the will and definitions of mankind’s order. The analogies with the migration and movement of people – by force and by choice – and the hierarchy of notions of belonging and home, are abundant.

Wang Preston’s practice has always roamed between polarities and challenged such binaries: nature and culture, female and male, East and West, the idyllic and the undesirable. In 2010, the artist embarked on her first major work in the landscape, ‘Mother River’. In order to dismantle the patriarchy, it was necessary for Wang Preston to begin with the first, all-encompassing myth of women created by men in her birthplace: that of the Yangtze River, believed to provide a lifeline for the whole of China. Since foreign cameras began to visit and document the region in the 19th century, the Mother River image has been propagated to sustain the ideology of modernisation in China – a symbolic image of an expanding nation united by a single source of water. In the creation of this omnipotent female embodiment of nature, however, women, and especially women of colour, have been absent. Wang Preston’s insistence on being present – even when not visible – in the landscape is therefore always a charged, politicised gesture. Yet her interactions with the landscape are distinct from that of the men who have undertaken such expeditions before her: she photographed along the entire 6,211 km length of the Yangtze at 100km intervals on a large format film camera, gradually tracing the water flow back to the source. Though spectacular, Wang Preston avoided the most famous sites along the river – such as the historic Three Gorges, Ghost City, or Goddess Peak – creating a quiet and contemplative revision of what has been shown of the revered region. Many of the photographs are beautiful, but it is an unassuming, inconclusive beauty, as if by default – a beauty that articulates the subjectivity of perspective, no matter how precise and rigid the photographer’s process. ” A fundamental principle in her approach is to “make work with hope, not desire”, as she explains.

In ‘Forest’, Wang Preston’s eight-year, multi-award-winning project completed in 2017, she ventured into the opposite context of China’s megacities, moving from modernisation to examine industrialisation in the transportation of ancient trees into urban reforestation areas. In the harrowing and emotive pictures, a complex and ambivalent narrative of China’s interactions with nature emerges: a culture that both revers and admires plant life and seeks to preserve and harness its positive effects, but that also applies the ill logic of advance capitalism, and ideas of domination and submission (endemic to the patriarchy) to try to control and exploit it. The ‘Forest’ images, arresting and anthropomorphic visions of the Anthropocene, stand as a synecdoche for the worldwide commodification of nature, without shying away from the role aesthetics plays in the system of objectification and creating desire. As an artist, and particularly, as one who works in photography in both the East and West, Wang Preston is acutely aware of the politics of the ‘good picture’ in facilitating presentations of the environment.

‘With Love. From An Invader.’ journeys onto British soil, moving from industrialisation to consider colonisation as it is manifested in this terrain: “there are many parallels between Britain’s multicultural society and our recombinant ecology – species arrived here from all over the world, influenced by Britain’s colonial attitude, actively bringing in foreign species,” Wang Preston says. Concerned with finding an effective feminist expression within the genre of the landscape art – a language that has excluded women of colour for centuries – Wang Preston confronts the inherently colonial and patriarchal qualities of the medium: one that seeks to categorize and divide by attributing human value. While her iterative process often draws on a clinical curiosity – cutting, dissecting, examining on a microscopic level, mathematical precision and study, display – she challenges what she refers to as the “mythic authority of science”. Each work represents a deeply personal, solitary journey, in which Wang Preston reconnects with the healing power of the elements. “I feel the most alive when I’m out in the land: that smallness, that feeling of being battered by the wind, that feeling of being so pleasantly surprised by a rainbow.”

In an article in the New York Times in 2019, Teju Cole pessimistically framed the future of photography as a means to continue, as it has in the past, “to illustrate, without condemning, how the powerful dominate the less powerful”. Wang Preston’s work consistently contends with this. The underdog, the unexpected, and the unseen thrive in her photographs and installations. All of the works in the exhibition – as the title ‘With Love’ evokes – act as a proof of co-existence and prosperity against the odds. “The strength and the life of the Rhododendron doesn’t depend on whether it is native or not – it keeps happening.”

A recent work With Love. From An Invader, sees Preston connect with her chosen home, here in the UK. For this durational piece, Yan Wang Preston walked to the same love-heart-shaped rhododendron bush at Sheddon Clough, Burnley, Lancashire, UK, from 17th March 2020 to the 16th March 2021 at the frequency of every other day. A photograph of the rhododendron was taken each time, in identical manners, always at half an hour before sunset. The exhibition includes a series of four photographic prints from these visits.

Rhododendron was chosen for this project, for many reasons. Introduced to the UK by colonial botanists in the late 19th centenary as an ornamental plant, it is now often seen as a non-native and invasive species by ecologists. Many of the rhododendron species currently grown in Britain are originally from China, Preston’s motherland. Hidden in the heartland of the South Pennines, in an ‘ecological wasteland’, the local landscape is simultaneously post-industrial and post-colonial. This rhododendron tree happens to have a natural shape of a love heart. An alien species sending out love – it is a significant symbol to anchor Preston’s research discussing the issues around landscape and identity. This work diversifies between prints, film, sound, and artist book.

The most recent body of work autumn, winter, spring and summer brings together fallen leaves, seed pods and flowers collected from one Rhododendron tree in Autumn, Winter 2020 and Spring, Summer 2021. At Messums, Winter captures a performative ritual of closure with collection, arrangement and burning of seed pods on snow. Winter also includes a series of dead seeds, marking an end and erasure. Spring and Summer, presented as light boxes of gathered fallen flowers, form the evolution on a photographic enquiry that has progressed from the land to the body. In the collecting of fallen leaves, seeds and flowers, in the burning, Preston gets closer to the self, the materials and inevitable life cycles.

With Love brings together the genesis of a photographic journey that has been steeped in landscapes of origin found and made. The exhibition also poignantly presents a new direction for the artist, one that connects the body to the land, through studies of acts and presence.

Four photographs sold as a set 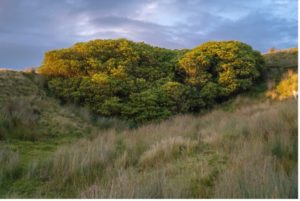 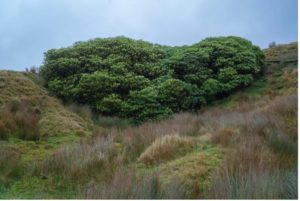 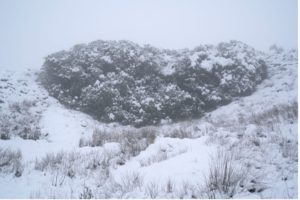 Mother River, shown in London for the first time, is a conceptual photographic journey taken over a period of four years (2010-2014) along the entire 6,211km of the Yangtze, China’s ‘Mother River’. From the remote high Tibetan Plateau, through the Three Gorges and on to the river’s end at Shanghai, the photographs capture the dramatic shifts in landscape and offers a perspective on China’s present-day development. Preston used Google Earth to identify the coordinates of sixty-three locations marking every 100 km of the river’s course. It was these sixty-three ‘Y-points’ that she set out to reach and to photograph, come what may. Mother River is a modern-day adventure. A rigorous artistic concept and an epic yet uncontrollable physical process that marks the beginning of Preston’s performative photographic practice.

Y8_700km from the river source

Continuing her work in China, the exhibition includes Forest, an award winning body of work, for which Preston spent eight years (2010-2017) investigating the politics of recreating forests and the ‘natural’ environment in new Chinese cities. Following the trail of old trees to new towns, Wang Preston embarks on a journey of erasure and contradictions. The project highlights the attempts and failures of recreating nature for urban consumption at a scale that is unsettling.

Eleven photographs sold as a set

All of the seed capsules collected from one rhododendron shrub during the winter of 2020, arranged on a bed of snow and then burnt. 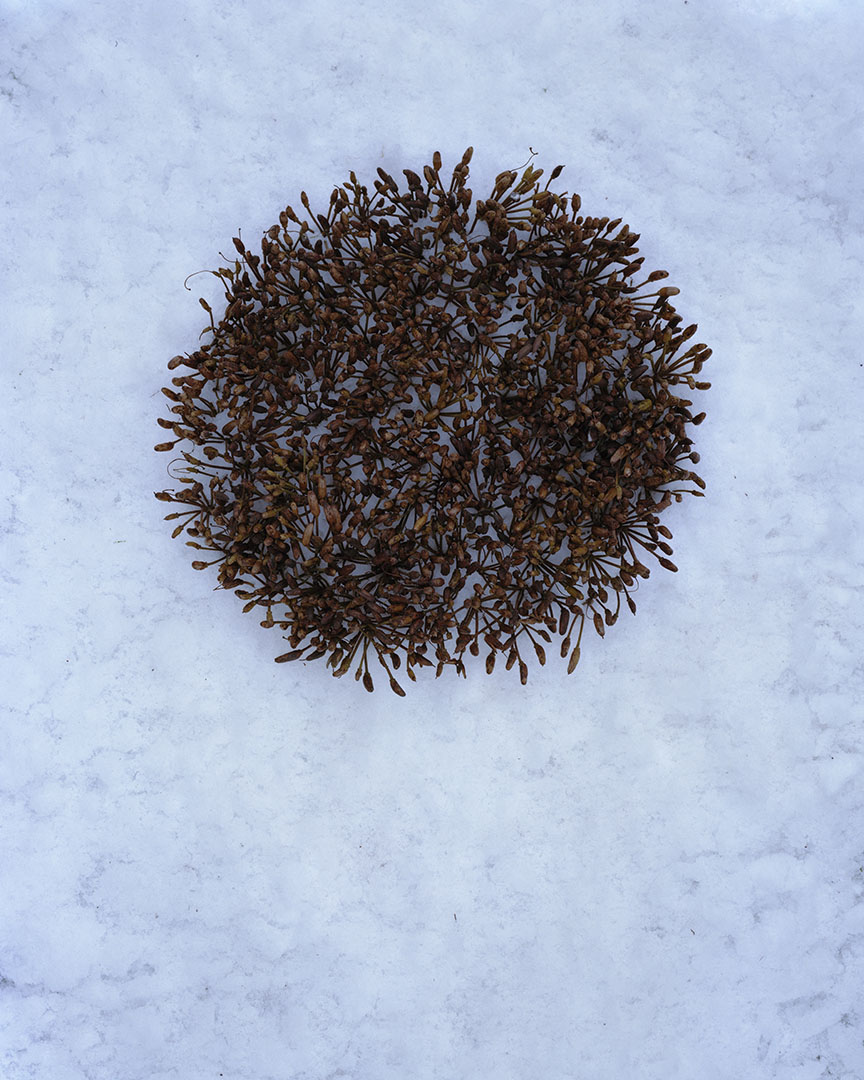 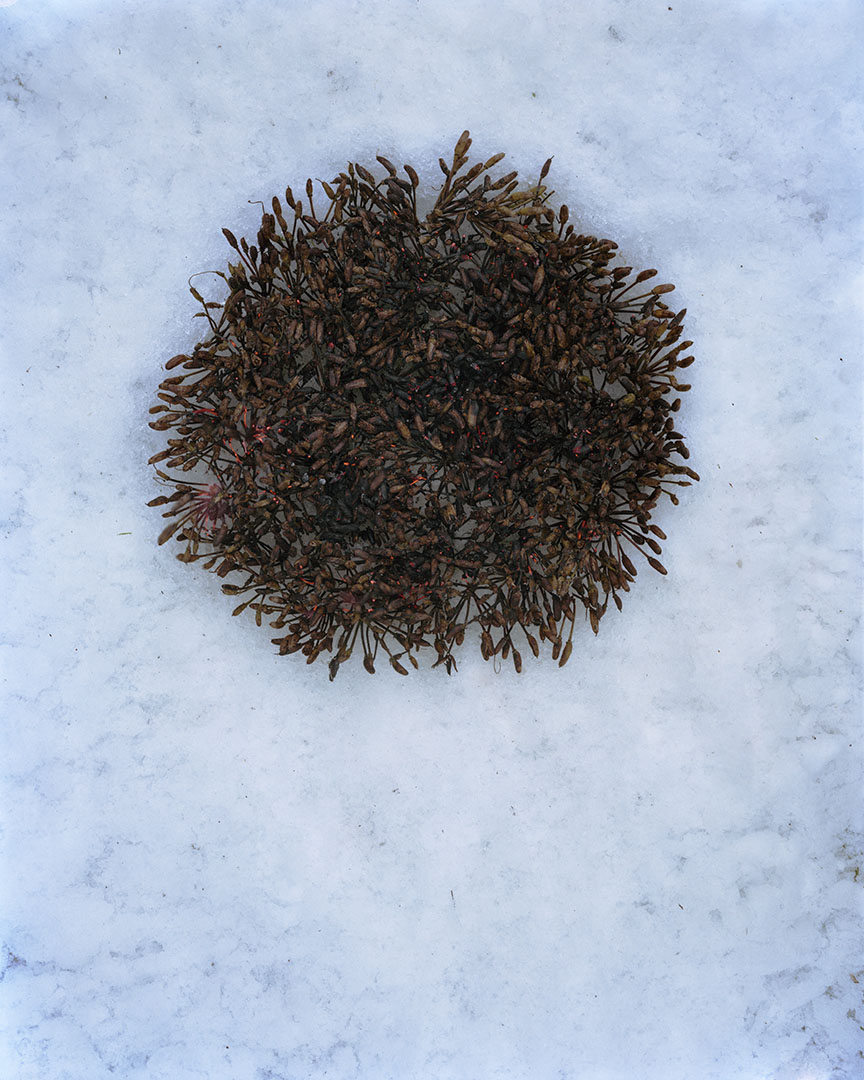 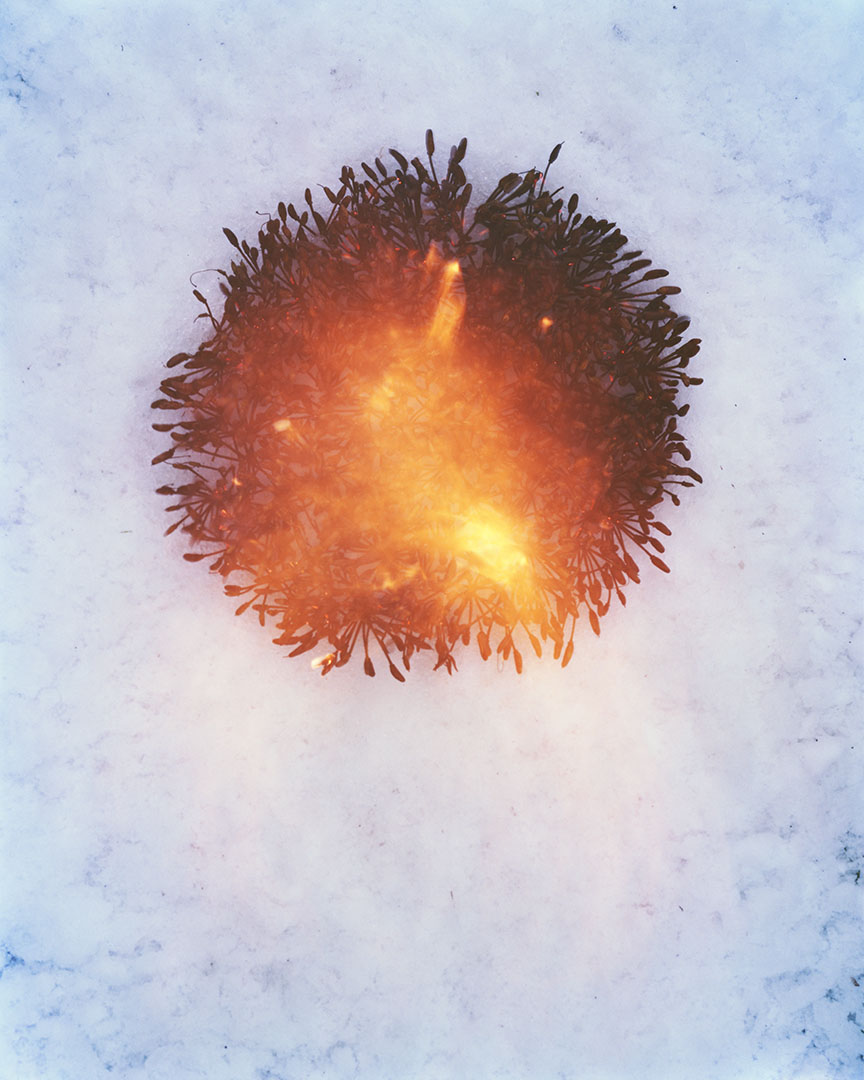 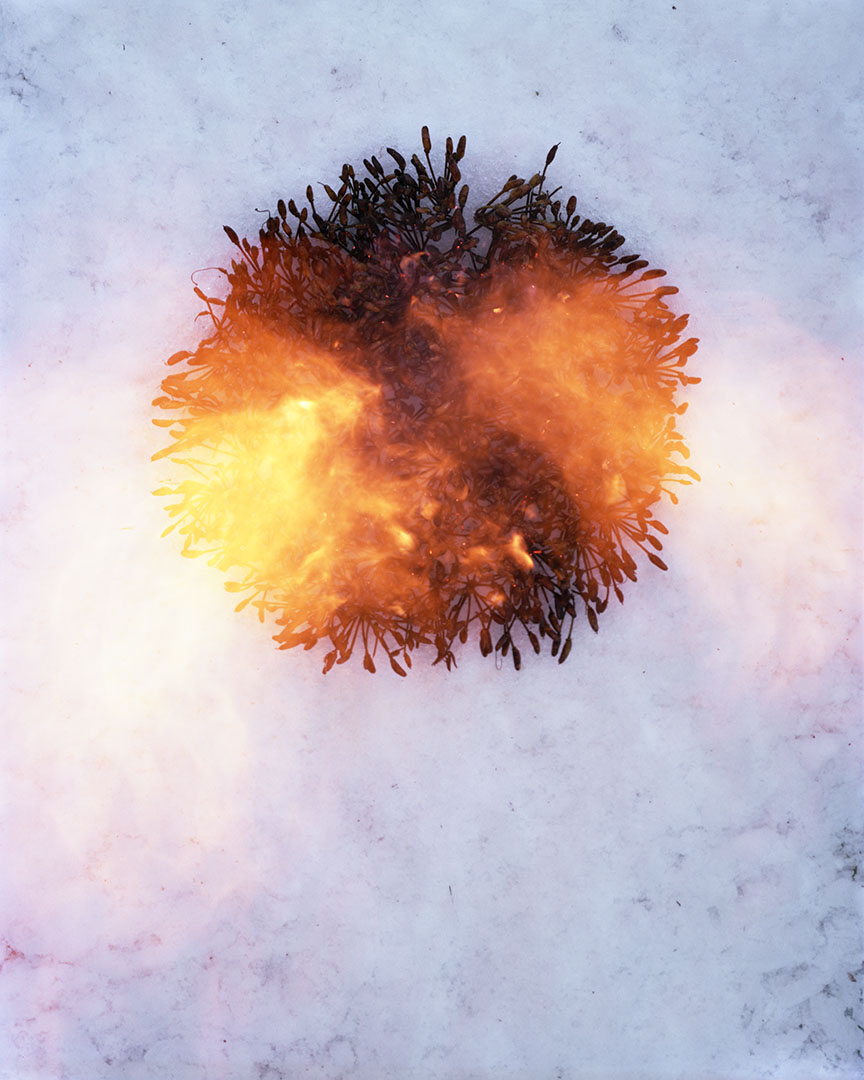 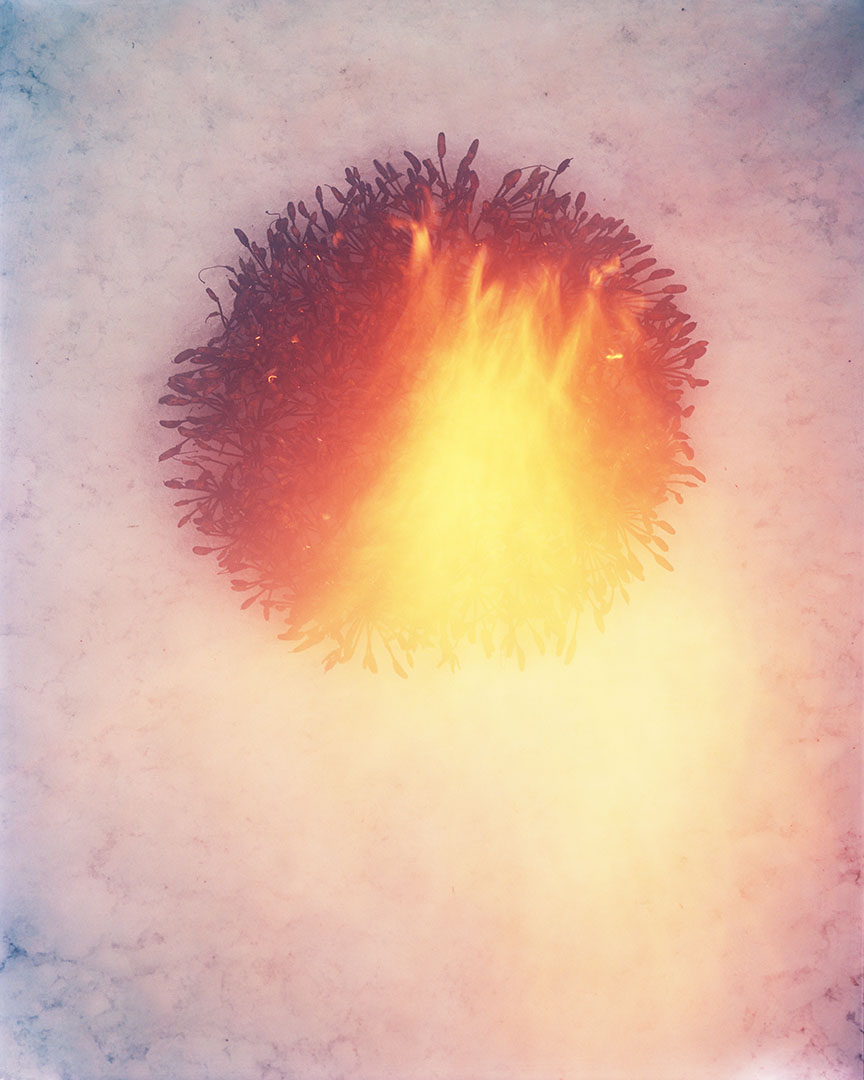 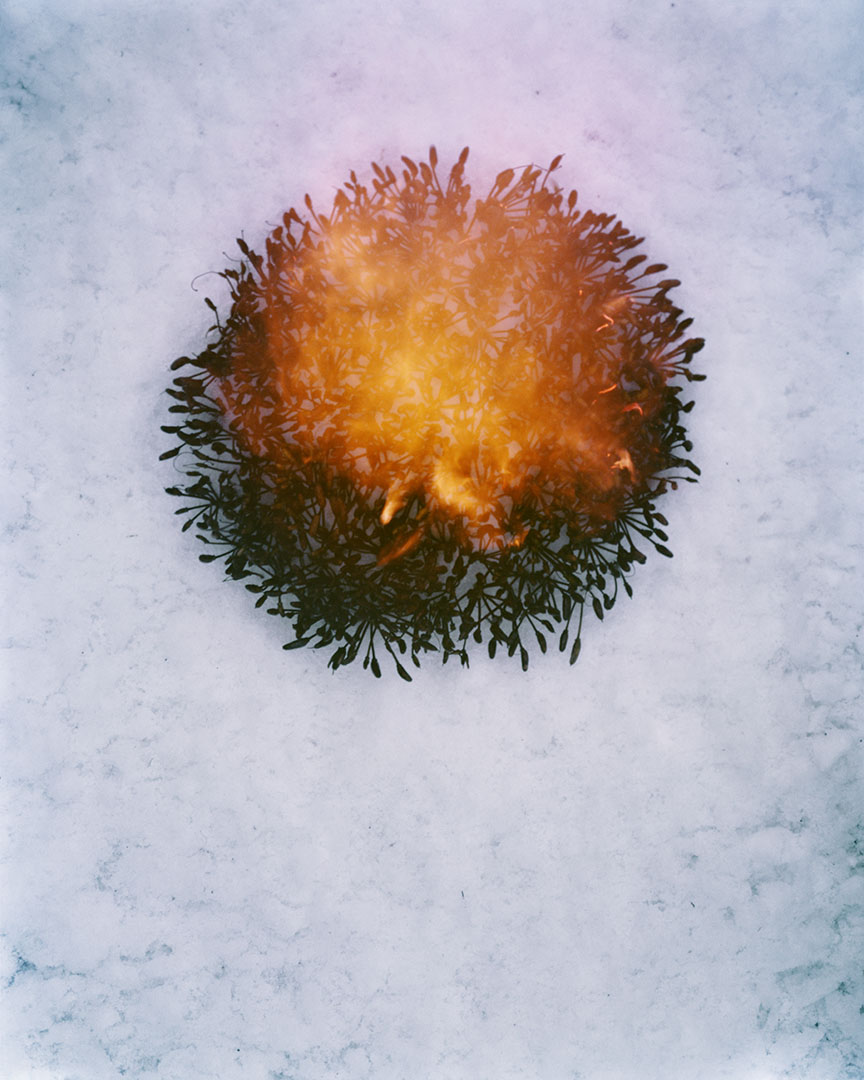 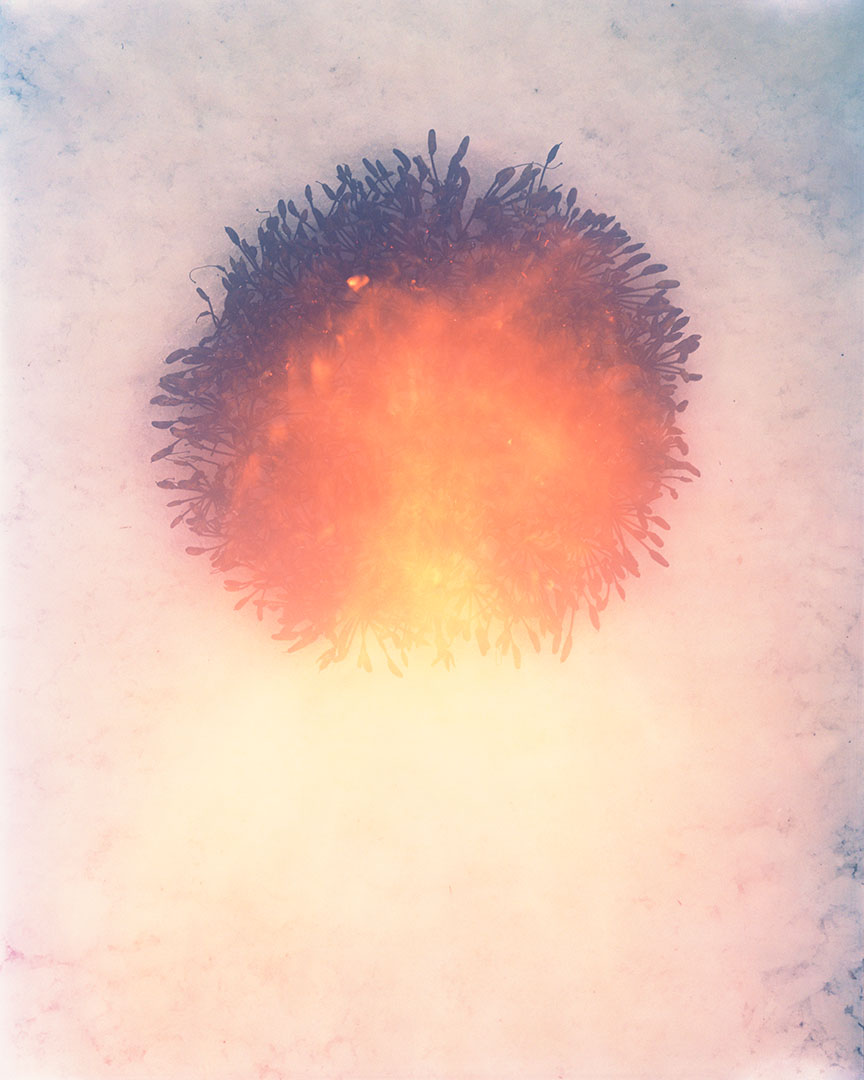 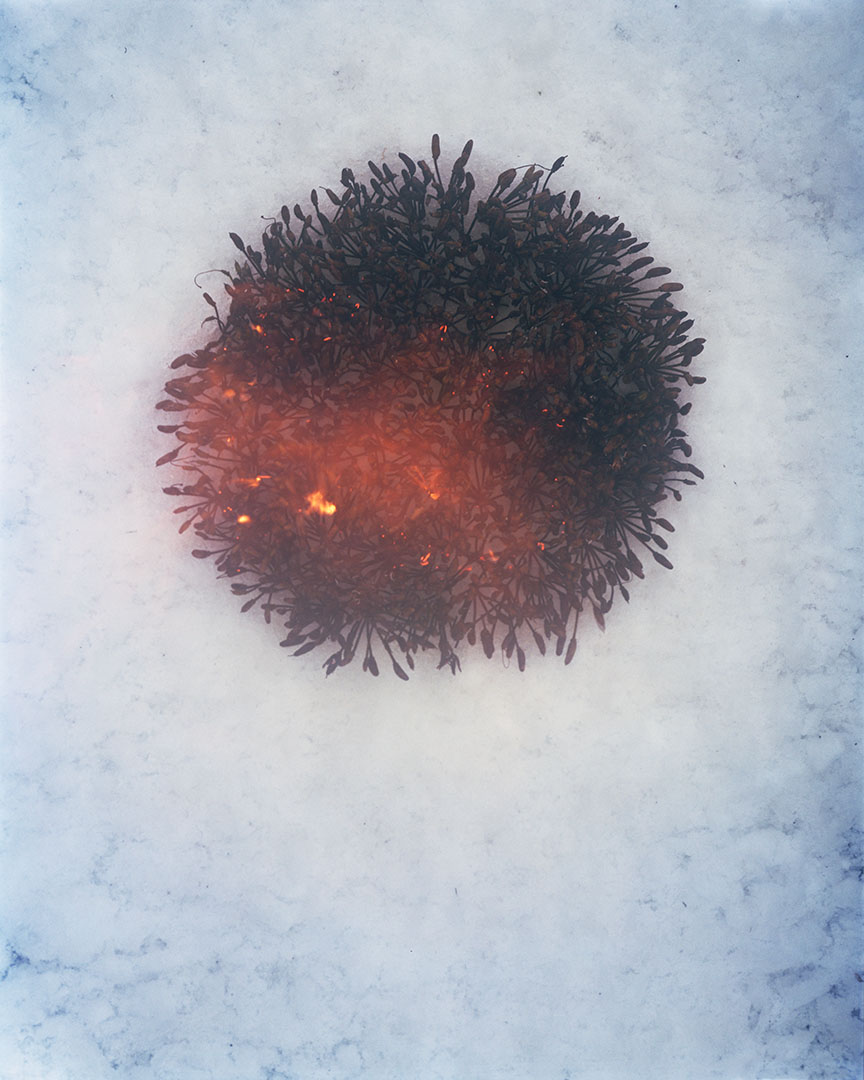 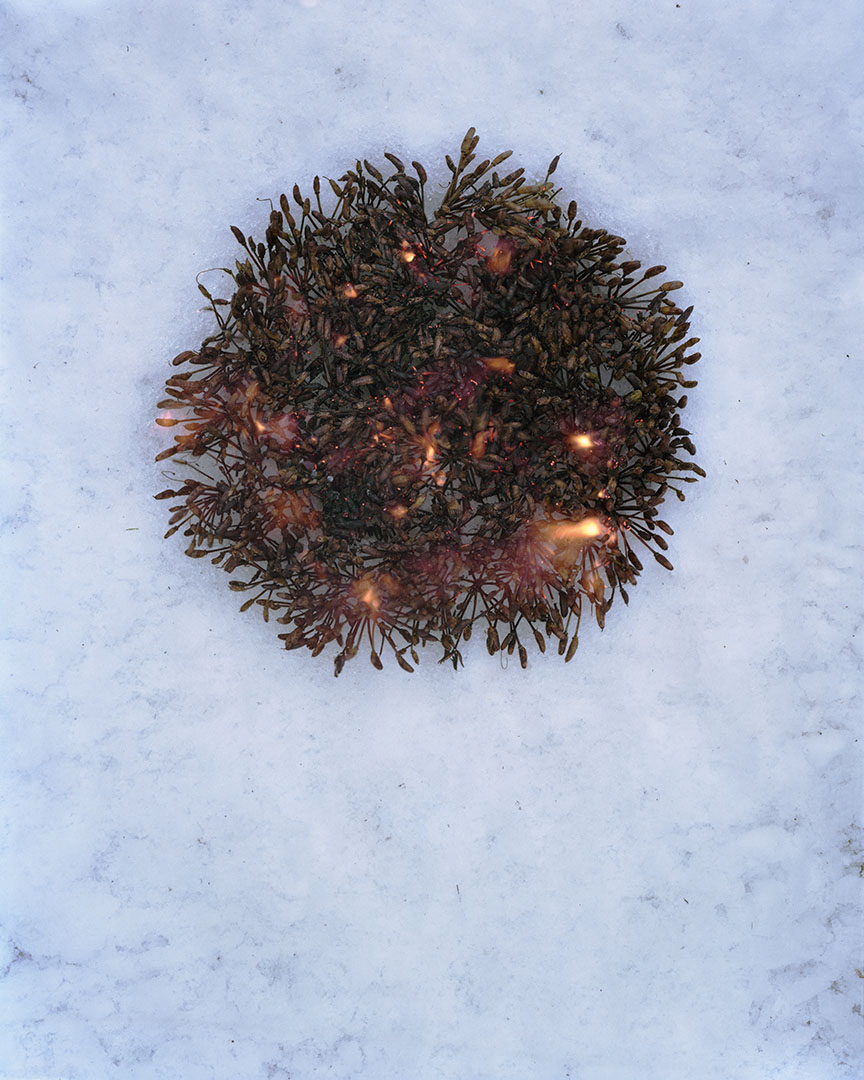 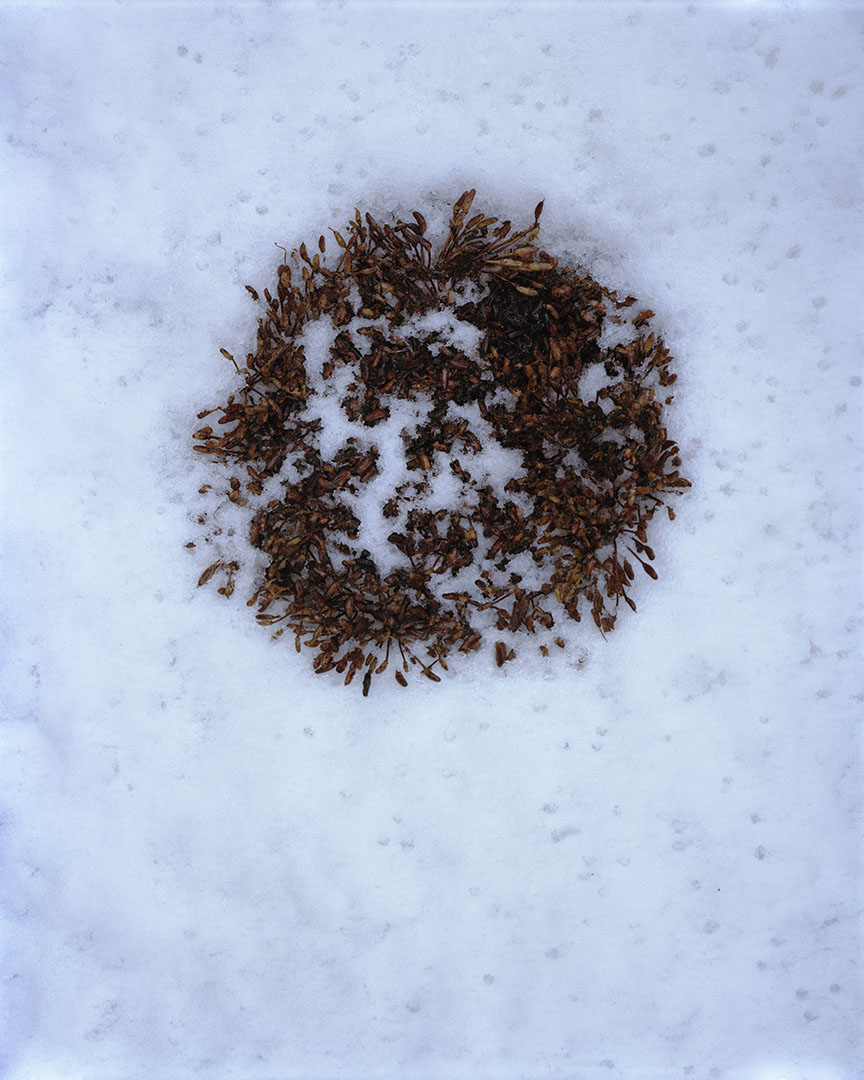 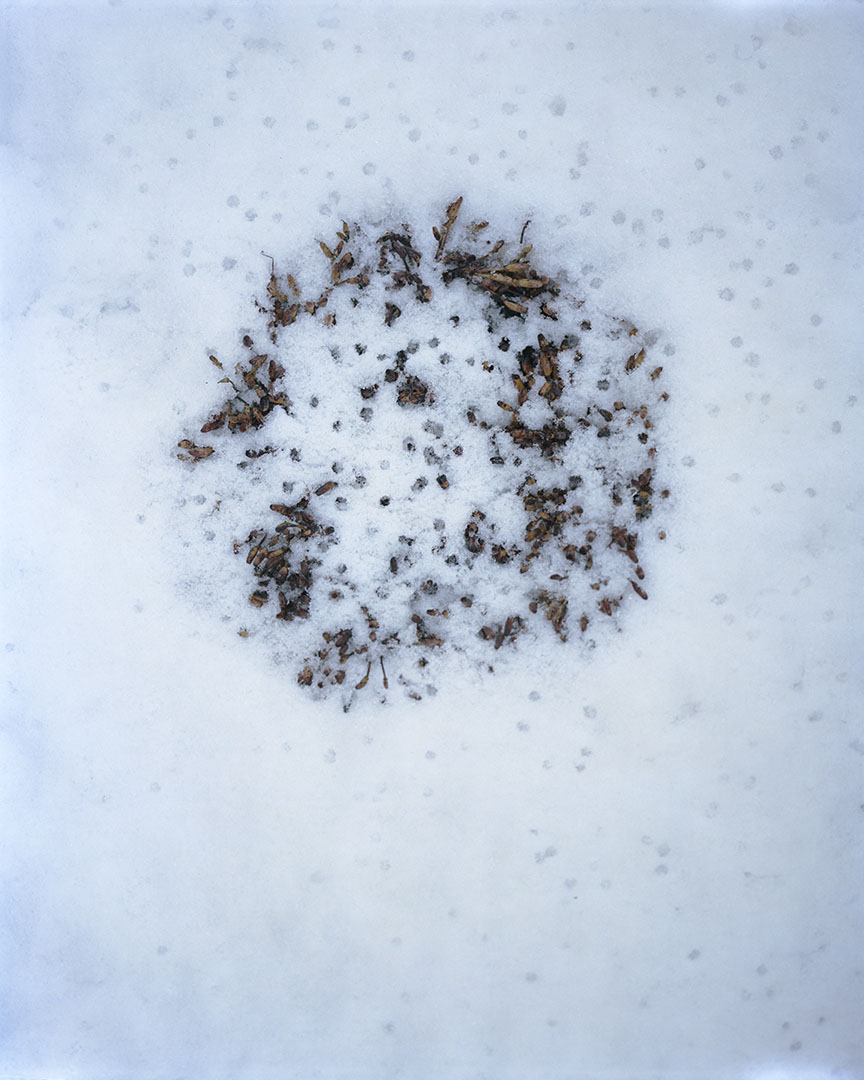