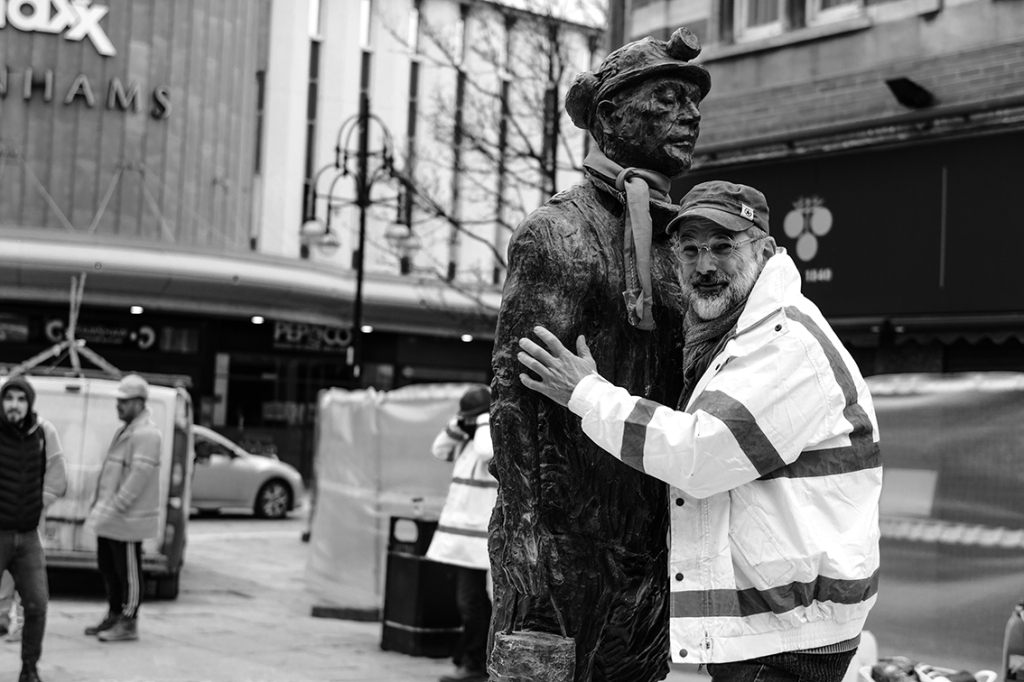 The Tribute to the Miners in Doncaster

In 2018 Edwards was awarded a commission by Doncaster Council to create a sculpture that celebrates the lives of those who had worked in the pits around Doncaster.

The sculpture consists of 40 portraits of former miners, whom Edwards sculpted in wax while they told their stories. These sessions were filmed by Doncaster College to form part of an online archive.[11] In February 2021, A Rich Seam was installed in Doncaster City centre.[12] The bronze faces sit in hand-made crevices of two 20 tonne pieces of York Stone from Huddersfield, with a central miner figure between them. [13]

Robert Macfarlane expressed that ‘In this unique project, Laurence Edwards has created a new kind of stone book: an extraordinary double-archive – told in bronze and told the story – of a generation and a community that is now close to disappearing.[14]

Tadaaa….Finally after 4 years, here is Doncaster’s “A Rich Seam.” A tribute to Doncaster’s Mining community.’

Forty tonnes of York Stone arrived from Huddersfield, at the crack of dawn on Valentines day…but the crane didn’t!

So we unloaded the miner and placed him in the centre of the rather splendid Plinth.. and waited anxiously!

Like the seventh cavalry our lovely 100 tonne crane arrived at midday! Only 5 hours behind shedule. The first one had broken down, the second was too small.. so a ‘Mate’ with a crane in Leeds was asked to ‘do us a favour’… leaving an understandably irrate wife on a rather special morning!!

Reggie and George made sure the rocks sat safely, concreting, rather splendidly, between the cracks and crevices…

I did a great job at masking my confusion ‘Did I leave a box at home’??

Danny Heaton the man who took these photo’s was even co opted whilst I changed drill bits.

I’m not known for my perfectionism..

It all looks fantastic, better than I could of imagined.! In the quarry the rock looked aggresive and brutal.. but in the street it’s golden hues simmered and bounced off the buildings. It’s presence seemed to lend a sense of humanity to the street..

Whilst we were there the varieties of Yorkshire light showed themselves.

This was the sun at 3 o’clock!

The street is now being relaid with beautiful York stone slabs, lighting and seating. We are creating the information points which will guide the visitor to the forty films made to accompany each head, showing the modelling sessions and the testimony’s of each miner featured, a valuable archive set down for the future.. A big thankyou to camera shy Tom whose planning and forsight made it all happen on the day!!

The street opens at the beginning of April, so you’ll be able to visit then. We hope for a grand opening with brass bands and banners sometime this summer when the restrictions have hopefully lifted… watch this space, and thankyou for coming….