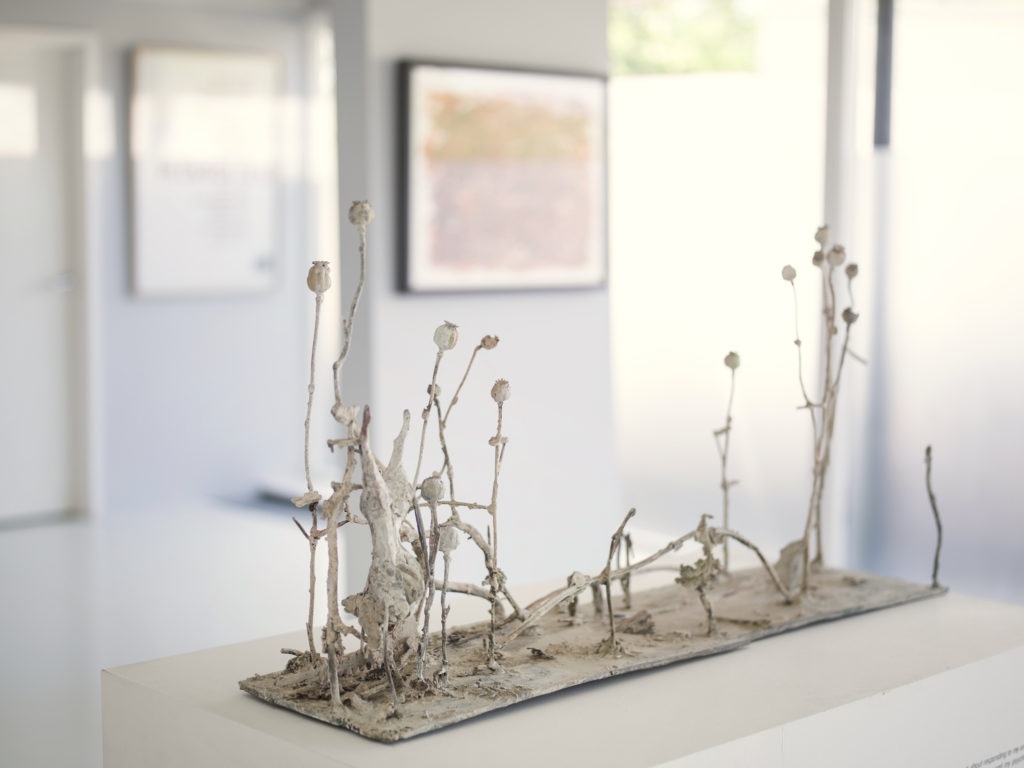 Q. Who or what are your leading influence(s) as an artist and why?

It comes from all cultures, it comes from Greece, from Italy and the Renaissance, it comes into Northern Renaissances and it comes from the French late 19th century and early 20th century, from Richier, and then England with the postwar British artists who were influenced by the process of lost wax casting such as Turnbull and Chadwick, Paolozzi and Butler, all of whom used bronze in exceptional ways. They were influenced by Giacometti, Richier and by Rodin, and it goes back on that trajectory. I am moving away from French influences and late British postwar influences and thinking about Northern European and German late Renaissance. I am half German, so I think there is an ancestral link there. I am looking at northern European cathedrals, rude screens, churches, I am looking at the expressive head.

The spine of influences has always been bronze, the spine is metal, and spine is the figure.

And landscape, that’s my art influence, my landscape here and the writing around landscape which has been just as influential as any artist. My main avenues of thinking are definitely landscape, my connection to landscape and my connection to the writing about landscape. I constantly read writings about landscape. Sebald was a big influence 20 years ago. He walked right through my landscape and opened it up for me and shaped it and showed how you could extrapolate from walks in the landscape to thinking globally through time and history, through moods and states of mind, and psychology, and through literature.

I am a Suffolk person, my mother was German, my matriarchal line is German and my paternal line is just Suffolk back to mediaeval times, so it’s my people as it were, my tribe, and I make tribes, I make tribes, groups of figures, collections of people, communities, which is certainly an occupation of this landscape.

And the church, my family history connected to the church. I rejected it completely, but those buildings dominate this landscape and my first real experience of sculpture in this landscape was the tombs, and lying figures in churches, stone carvings of characters lying with dogs at their feet, and I made that lying man sunk into the marshes. It seems to me that that’s the journey, the beginning of the journey, a combination of those experiences.

I was brought up in Snape, I also had Barbara Hepworth and Henry Moore at the bottom of my garden basically so there was that kind of modernism with sculpture all around me as well as well as those churches and the architecture, and the archaeology of the landscape. And Ted Hughes, and Dylan Thomas.

Q. What are the processes involved in making your work?

I photograph a lot in the landscape, and I collect wood. It’s good to have a studio where nature is coming in, and you can see how this is influencing my sculpture. This whole studio is immersed in growth and all this growth invades me every year. It’s always here, it occupies my thinking constantly it’s much more of a subconscious mindful existence, and it’s important to have it constantly needing to be dealt with as a problem. Nature invades the studio, all the plant life outside breaks in and makes life very difficult. The windows are difficult to close, I saw ivy in the fridge the other day, it’s quite wonderful! It’s that kind of entropy that I’m interested in, it’s almost malevolent, a creeping kind of Triffid, it affects my life. I was worried when I left the studio in the marshes but it’s in me, it’s there planted, it’s all part of me, the landscape is still here, and I’m still here. This studio has a completely different relationship with landscape, it’s much more personal, it’s more about penetration, it’s more about invasion, about dealing with a co-inhabitor, it’s dealing with living alongside nature and looking at it and thinking about it as an abstract thing. Leaves will fall on the back of my sculpture tonight and I will have to make decisions about those leaves in the morning, so it is quite wonderful to have that, nature is a bigger part of my life than it was then. It’s a symbiosis with nature, a relationship where we feed off each other.

Q. What is the inspiration behind the specific works in the exhibition and how do they sit within the context of your work?

The landscape with the kind of poppyseeds, it’s been seen as slightly apocalyptic, as though ash has descended upon the wood, a kind of nuclear waste land. I didn’t quite see it as depressingly as that but it is quite depressing, there is carcass in there, there are poppies. I made it nearly 20 years ago so it was an early work. I was making tableaus. I was definitely thinking about landscape in a much more illustrated kind of way. It was the time I was reading people like Sebald but there was definitely a literal depiction of landscape. I was creating tableaus of woodland, of wasteland. And I was having kids. There’s a kind of spinal object in the sculpture which is actually from one of those wooden kits of a dinosaur the kids put together. It’s the kind of detritus, the things that were around my life at the time. There’s a carcass of a deer in there. I was driving through the forest and woodland all the time and picking up roadkill. I was drawing carcasses and learning about anatomy, drawing deer carcass and butchering meat. So, it’s a kind of collage of events of being a father and playing with kids toys, and the carcass, and body, and skeleton, a kind of a weird view of life, and a connection to nature, and driving through woodland every day and pine forests, empty soulless places really inhabited by deer and not much else so there is kind of a melancholy there. It’s definitely a woodland landscape, thinking about the landscape around me and woodland.

Modern Nature is a tree in a very famous wood around here, one of the most ancient woodlands in Europe called Staverton Thicks, which has got thousand-year-old Oaks, it’s like a Tolkien landscape with trees dying and falling over. I went into the wood, the deep dark forest, and I took clay and my modelling stand to see what it would be like to model a form which had no skeleton and no muscle and no tension like you do in a body. That tree came back to the studio, that Modern Nature tree, it sat in my studio and I used it often.

Staverton Man has a figure coming out of the tree, the body emerges from the tree, the tree in Modern Nature. I was very much getting involved in the northern Renaissance and looking at Dürer, and the famous melancholia etching of the artist he’s got all his strewn tools around him and he can’t use them. It’s the frustration of unrealised potential. It’s the the shape of melancholic thinking, the shape of pathos and unrealised potential, and loss. I began to make those shapes, and draw those shapes, what I call Dürer solids. I love the idea that shape can evoke temperament, and shape can evoke mood, and I want my feelings for that tree to be like a fungal growth on that tree, that symbol, that emblem of unfulfilled potential. It’s what the Greeks called pathos.

Q. You may be familiar with the work of Common Ground in the 80’s to link art and the environment. What would you describe as the intended impact of your work today?

I am a human being trying to make work about responding to my environment, to nature, and the fact that I’m a member of a tribe, of a community, and my psyche is shared and my way of inhabiting the world is shared. I might be documenting that kind of experience so that people can share that and connect with it in a certain way.

There is a performative aspect to the work which I really love for example, ‘The Creek Men’ coming through the landscape was a massive moment for me. These figures came down the river and were floating outside the Maltings and at high tide the ankles were above the reeds and their bodies had risen to almost superhuman status, and at low tide they were in the mud, sitting below the mud, so there was this extraordinary relationship like a pressure valve, like a barometer of the environment, a barometer of time. It was all about the water, about the mud, about the landscape, about the environment, about the synergy, about their relationship, and also with the stars, the cosmos, the moon controlling the water. The spring tide was their way in, they couldn’t leave until the October winter high tide, and although there was a fight to get them removed, they couldn’t be removed. The land between low tide and high tide was called no man’s land and they were occupying no man’s land. It was a powerful, powerful time, they became a cause célèbre, people battled their way to see them, and they return to see them. Loads of people wanted them to stay, there was this wonderful feeling of impermanence, but permanence as well, just like us. They were floating, not connected to any land but they were static, they never moved, they were like anchors. So, it was wonderful, and stumbled upon by accident so they became a core document for me, and I don’t think you could ever match it again. Robert Macfarlane wrote beautifully about them. They really epitomise that relationship, and the legacy one would want to create, and the relationship that one wants to evolve, it’s about that stuff that hits you in the gut that, that you connect with emotionally, it’s not really about art, it’s about human connectivity.

It is definitely important for me that I have modelled the figure, and I have made it to experience the making, going through a journey with the making, impregnating it with a kind of psychology, a consciousness, it’s important to have that journey embedded in the sculpture something that a scan or a 3-D print would not achieve. I have to have this journey, this torturous long folly, which is really where the soul is injected into the objects and that soul is left to omit through good locations and good placing, it can actually hum in landscape, just emit for a long, long time, that is my ambition.