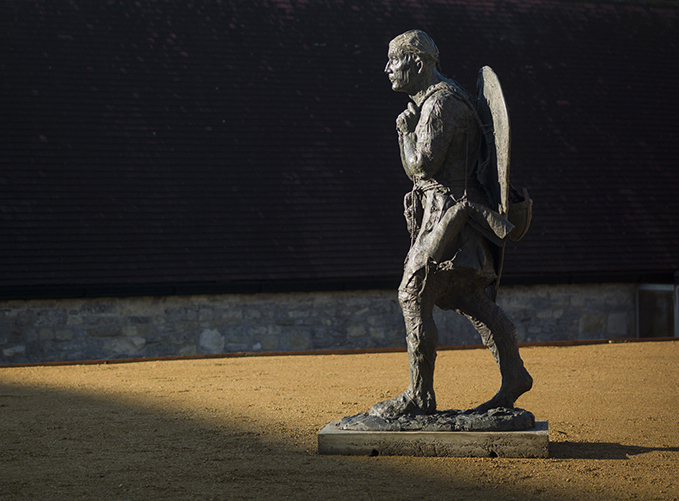 Homecoming has been commissioned for a new housing development that resides near the remains Norman campsite. The figure took inspiration from the scenes in the Bayeux tapestry and the Normans’ arrival in England. Edwards was fascinated by the influence the Normans’ had on Britain not only in terms of architecture but also language. Without the Norman invasion, words such as allowance and beef would not be in the English vocabulary.

Homecoming continues the themes of walking men and migration seen in Edwards recent works. The figure would not only have had migrated to England but also through England as the Normans’ continued their conquest. The figure is an exploration into the life of a professional soldier with little autonomy over their path in life; he may be walking but he hasn’t chosen where he walks. We witness the soldier at the moment of his return home which is perhaps appropriate for a sculpture situated within the commuter belt, echoing those returning home each evening.

There is a duality to the figures face; one side appears hopeful and the other fearful. It manifests the anguish of coming home having been away, unsure of what has changed and what has stayed the same. Although dressed in the regalia of a soldier with a shield and helmet, this is not a glorified return, he appears a battered and well-used man. In fact, his tunic is made from an old overall of Edwards’. There is a sense of anxiety in how the ropes are twisted around his shoulder which implicitly rather than explicitly reflects his mental state.

Laurence Edwards read Paul Kingsnorths ‘The Wake’ trilogy as a part of the research for Homecoming. Set in 1067 in the Fens and written in what the author calls ‘Shadow tongue ‘ a simplified old English which serves to evoke perfectly the life of ‘Buccmaster of Holland’, whose family and life have been destroyed in the savage merciless invasion. The story follows his efforts to raise a partisan gang in the forests, plotting and picking off Norman soldiers as they impose impossible hardship on those Britons left alive.

Homecoming spent some time at Messums Wiltshire, where Laurence introduced us to his latest sculpture. If you would like to watch this talk, please click here. The sculpture has now been installed at its new home in Ebbsfleet, to be enjoyed by the residents of the new housing development sited there.