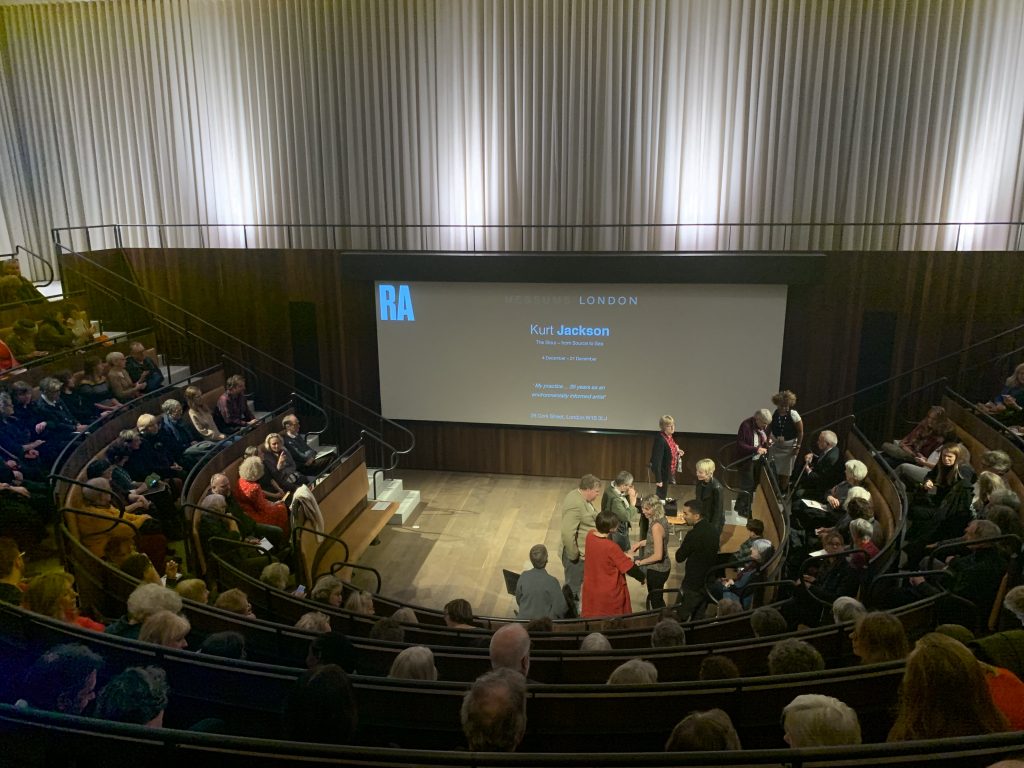 The day began with a packed curator’s tour of ‘My Father’s River’ led by Johnny Messum, before moving to the Royal Academy Lecture Theatre where Kurt spoke to over 300 people about his work both as an artist and an environmentalist. He talked through the major projects that have come to define his practice as an environmentally informed artist.

His residency aboard the Greenpeace ship Esperanza was described in vivid detail alongside excerpts from a BBC documentary.A clip of Greenpeace activists attempting to document damaging fishing practices on a small rib in rough seas while Kurt is continually drawing, documenting the action around him encapsulates his determination and versatility as a painter.

This versatility was also apparent in Kurt’s long stint as artist-in-residence at Glastonbury Festival. The rapid brushstrokes that usually describe the natural landscape were now applied to vast crowds and wild performances. Kurt is clearly a polymath; from designing trophies for environmental awards, working in bronze, pewter and a more recent foray into glass, his enthusiasm for making was increasingly evident.

For most of the talk however Kurt discussed the landscape painting for which he is most well known. That Kurt’s paintings so energetically and vividly evoke these landscapes is less surprising after seeing footage of him painting outside in the elements, canvas spread out on the beach. He gave real insight to the excitement and love of nature behind his works – from protected and fragile environments of rich biodiversity to patches of grass by service stations.

After the talk, a crowd headed towards Messums London for mulled cider and mince pies surrounded by Kurt’s magnificent paintings. Beginning at the river’s source on Wratting Common in Cambridgeshire, the paintings document the river as it winds through the East Anglian countryside, along the border of Suffolk and Essex to where it meets the North Sea at Harwich.

Kurt often painted the Stour with his father who lived by the river for three decades, swimming in it every day. In this body of work, Kurt has rediscovered the river that was so important to his father as well as capturing a fragile and varied landscape with the eye of a keen environmentalist.