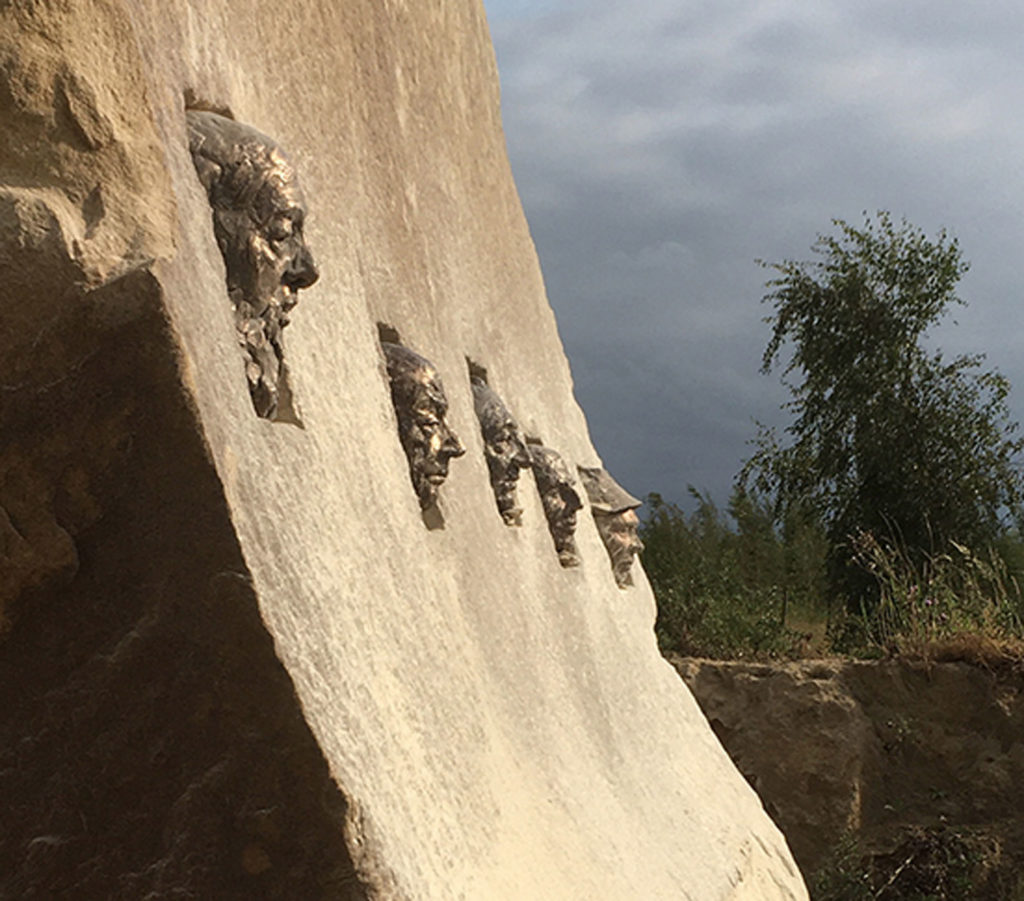 This month i’m taking you to a quarry in Yorkshire where we are carving niches for 40 miners portraits, for the public sculpture i’m making to celebrate Doncaster’s mining history.

To be installed next February.

Then you will see a Norman Soldier.. yes.. this one’s come out of the blue. A commission I recieved three years ago, (and had forgotten about) finally recieved its planning permission and suddenly a tight deadline presented itself.. alot of fun.. you’ll agree!!

Anyway enough of me.. lets go to the quarry…

‘Johnsons Wellfied’ in Huddersfield, where Freddy Morris my trusty stone carver and I stayed for ten days, cooking beautiful food (ready meals from the Co-op). Huddersfield is a truly beautiful Victorian town set on the edge of the Peak District in Yorkshire, I loved being there.. Here’s a photo Essay of the work done, black and whites by Bill Jackson, colour by me.

I think it’ll be a random set of photos, not in any particular order….

These are giant blocks of York stone, weighing about 25 tonnes each..

We drilled pilot holes first to establish where we were going to chisel..

At times it felt as if we were wandering through corridors of heads in ancient streets.

This stone recieves light so beautifully, I realised it would have been impossible to replocate this effect in any other material.

It became apparant early on that the heads should flow with the contours of the rock, they were set at different angles in harmony with the topography of the surfaces, bringing the viewing experience to life.

I decided to work with the scarring on the rocks, where the machinery had gashed and brutalized the surface..

This is John Davies, (above) who sadly succumbed to Covid this year, he is the first miner featured on the rocks to have passed away.

The blocks now sit and wait. A 6ft miner is being cast at the foundry and he will eventually stand between them in a newly refurbished street in Doncaster..

Next we have a 2mtre high Norman Soldier returning home to ‘Sweyns Camp’ in Ebbsfleet Kent, to a waiting family.

The sculpture is called the ‘Homecoming’ and has been commissioned to go on a site where once there was a Norman settlement, now a housing develpment.

I wanted there to be a certain anxiety as well as hope in his face and indeed, in the way he holds the ropes . I wanted to convey a man returning home after a long time away, having been through life changing experience. To a family that may also have changed.

His helmut hangs on his shield.. I love the shield, it was also a device I could use to express his emotional state, battered and scarred.

I loved hanging all the accoutrements on him, ambigous enough so the viewer could imagine what their purpose might be and what they may contain. Also making the tunic out of my old work overalls..

We start the casting after Christmas, and he’s due to be installed in April next year. If we are lucky we might be able to show him in Messum’s London space before he goes.