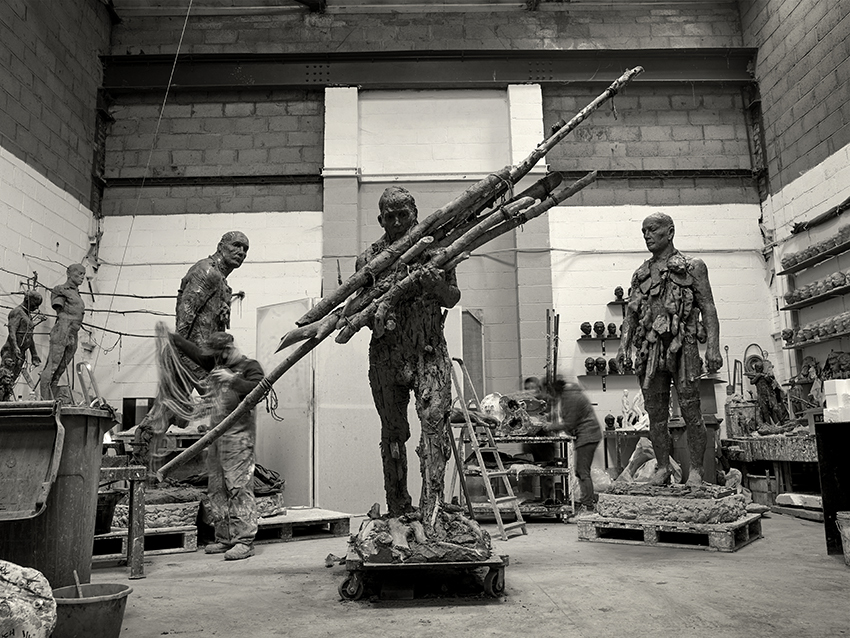 The journey of The Carrier began when a ship spilt planks of wood off the coast of Suffolk. During the process of picking up the planks from the beach, Laurence Edwards began to reflect on this repetitive motion of picking up and carrying, which developed into a motif that is seen in many of his works.

The sticks that The Carrier holds have both a literal and metaphorical weight. They have an emotional physicality representative of a loaded psyche, while also appearing almost too heavy to hold. The Carrier is at the tipping point, with his cheek tenderly resting on the wood acting trying to prevent the wood having a fulcrum, his mouth is wide as if puffing with the effort to do so. The work is very evocative of the Pieta, the idea that this figure is carrying like the Madonna a dead weight that is unable to support itself.

The Carrier is stitched into the horizon line, our eye carried through the figure via the sticks he holds. The bundle itself has a history, its tired-looking rope implying it is not its first use as he strides forward to an unknown destination. Laurence Edwards has presented us with a work that demands our interaction and makes us ask questions that cannot be fully answered.