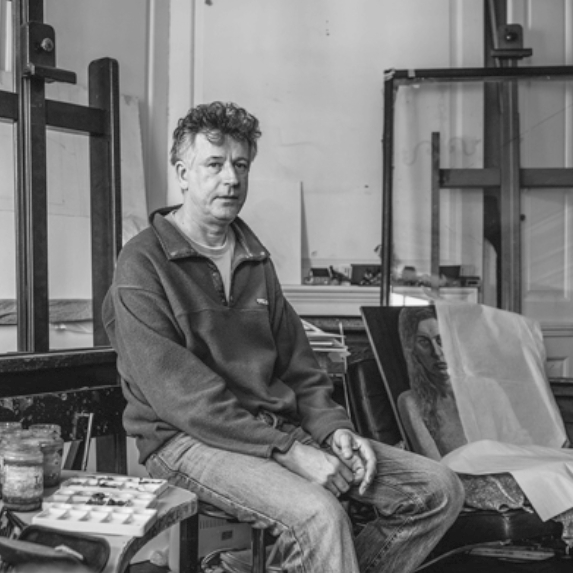 Williams trained at Farnham College of Art and Portsmouth University. He is Vice President of the Royal Society of Portrait Painters and is a member of the New English Art Club and the Pastel Society. His work is based on intense observation, particularly of human flesh, creating as a result, a heightened sense of realism. He works almost exclusively in tempera – a painstaking, exacting medium in which egg is used instead of linseed oil as the binding medium. While oil allows for a degree of flexibility and manipulation of the painted surface before it dries, this technique does not easily allow for alteration. It was this medium that Williams used for his remarkable portrait of the

Queen in 1996. The painting elicited controversy, particularly in the depiction of the monarch’s hands as Martin Gayford comments:

‘Williams’ still lifes and portraits – like much art – underline the passing of time and mortality. This was the reason no doubt why his fine portrait of the Queen caused controversy. Inevitably, his method, his close vision, revealed that that these were in fact the face and hands of an ageing woman. That is not how everybody chooses to think of the monarch. But as a work of art, and an exercise in sober, careful truth – telling like the best of his work – it was indeed, very impressive.’