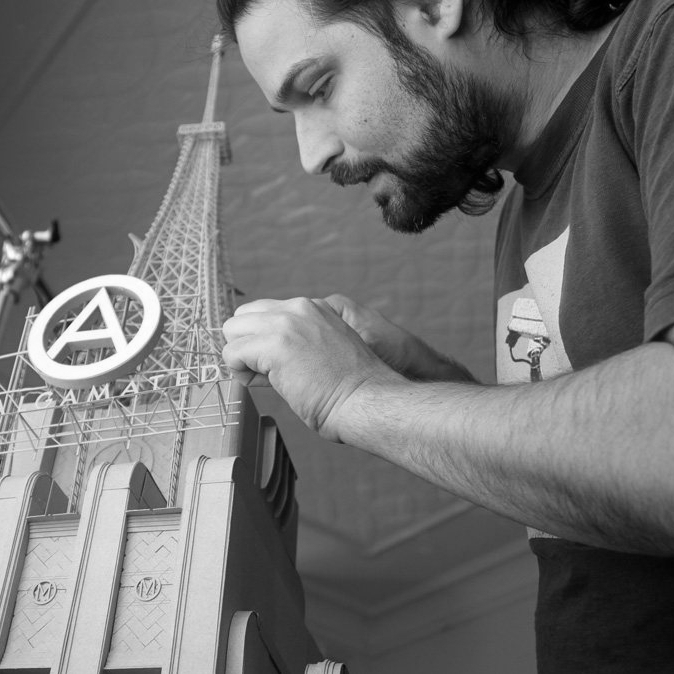 Daniel Agdag is an artist and filmmaker based in Melbourne, Australia, whose practise sits at the nexus of sculpture and motionography. He creates highly detailed sculptural pieces that have been described as architectural in form, whimsical and antiquated in nature and inconceivably intricate. Daniel predominately works in cardboard. Drawn to its utilitarian origins and monochromatic presentation, he creates a paradox of fragility and strength with structures that resemble architectural forms and machines.

Daniel describes his work as ‘expressions of symbolic self-analysis reconstructed in three-dimensional form’ – mechanical manifestations of his thoughts, ideas and ancestral stories. He takes inspiration from the overlooked, concealed mechanisms and systems that enable the industrialised world to function, and often explores the playful, fantastical realms of invention and imagination.

Whilst his work is predominantly realised in cardboard he has made work in steel, wood and glass in recent years as part of translating his elaborate ideas into large scale public art sculptures. His recent stop motion film The Lost Property Office was shortlisted for an Academy Award in 2018 and won Jury Prize for Best Animated Short at Newport Beach Film Festival in 2019. Daniel will show this 9-minute film ahead of a Q&A on his work as both an artist and filmmaker on Saturday 15 June.