Elisabeth Frink was 11 years old when she first encountered Dorset. Having escaped Dunkirk in 1940, Frink’s fathers next posting was Kingston, in Dorset. Frink lived with her family in the village exploring the Purbeck coastline, including Kimmeridge and Dancing Ledge. From Kingston itself she could look down onto the ruins of Corfe Castle, which embedded itself into her mind. The son of the family they lived with during this stationing was an artist and conscientious objector. In many ways, Roddy Fenwick-Owens opened the door for Frink and her artistic style. He encouraged her to forget her inhibitions and make completely original art. His mentorship combined with the events of the time resulted in ink drawings, foreshadowing her ‘apocalyptic’ style, which would emerge in her later works.

There are many reasons as to why Frink and Alex (her 3rd husband) started looking for someone in the countryside to live. A country abode gave Frink the space to build a large studio which could allow for the creation of large sculptures. When she had lived in France her house there had allowed for immediate access to the countryside for riding as well as other activities. Alex himself was keen on horses and living in the countryside. Another appeal of Dorset was the ease of access to London for gallery exhibitions, business and social reasons. It also meant that Frink could go to the foundries that she used throughout her life that were in London or close to Dorset.

In Stephen Gardiner’s biography of Frink, he recalls that as far back as 1961, Frink wanted to return to Dorset in some capacity. In 1976 the lease at Buckingham Gate was going to coming to an end, this house had always been seen as temporary while Frink and Alex established their life together. Frink’s friends the film actress Dorothy Phelan (Dorethy Bromiley)  and her husband Brian, lived near Sherborne, Dorset and their cottage was used as a base for house hunting at weekends. One such weekend when driving down the northern slope of Bulbarrow Hill, Frink and her husband Alex found themselves in Woolland. Here they found Woolland House which was a ‘converted stable building around a courtyard which backed on to the lane, a gloomy neglected, decidedly mysterious place overlooking an extensive overgrown garden’.

She was enthralled by its location surrounded by expansive land Woolland also had ease of access to London, which made it work for both Frink and Alex. Wolland was less than an hour’s drive from Corfe Castle which had captured her imagination as a child, as well as other places which featured in her childhood.

Alex’s son John Csaky and Marek Michalski were commissioned to build the studio in the gardens of Woolland. The studio as shown by its reconstruction is a simplistic affair of glass and brick. Designed with the views onto the with extensive land in mind, it was built adrift from the house. For Frink, the most important design aspects focused on the building’s functionality as a working studio. It had good lighting and space to store all the materials she used. As can be seen in the reconstruction, the ceiling of the studio is very high which meant that tall work could not only be made but moved with ease using lifting equipment. When completed in 1979, the glass doors could be opened completely, expanding onto an external hard surface. This was used when Frink was working on large sculptures, using the natural light to help her see the marks she had made, as white plaster produces a considerable glare.

The studio had the privacy and tranquillity that Frink wanted. However, it also had a proximity to her home which meant she could maintain the domestic family routine she loved. Frink was a disciplined artist. She started work early each morning, immersing herself both in the making of sculpture and drawing. For Frink Woolland was the ideal location, giving her space, quiet and situating her within the natural environment rather than a built one. The remains of the original house were used to frame the sculpture in the grounds, as well as the lake, wood and sloping lawns. When describing her studio Frink said, “I could not work without a place where I am able to shut myself off…This is the place where I work, I have to keep it apart from everything else.”

Although, Frink was not a practising Christian she was a humanist and the ancient landscape surrounding Woolland was also a factor in its appeal. In a documentary with Peter Shaffer and Perter Levi, Frink discusses the significance of lay lines. Bulbarrow which sits above Woolland is part of a connection of lay lines, (ancient paths which connect ancient buildings of significance. For example, Stonehenge). She that “I happen to believe in lay lines they affect people very deeply”. She was told by a Feng Shui master that Woolland spiritually was a very good place.

For Frink Dorset opened up her vision and allowed her to pause and move back from her sculpture in a way she never had before. Woolland was ideal for Frink due to its ease of access to London as well as offering an immediacy to the countryside life that she had had in France. 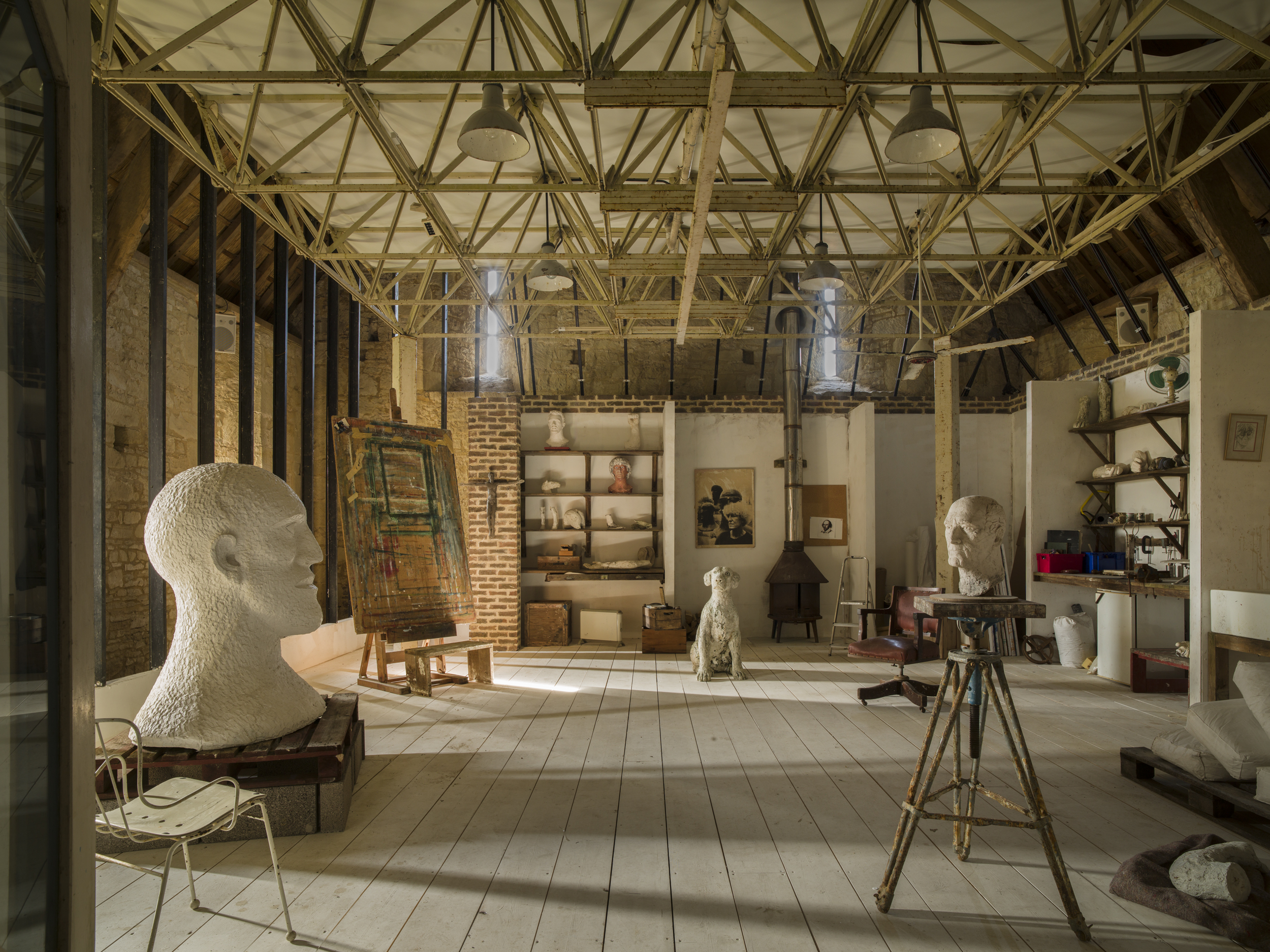 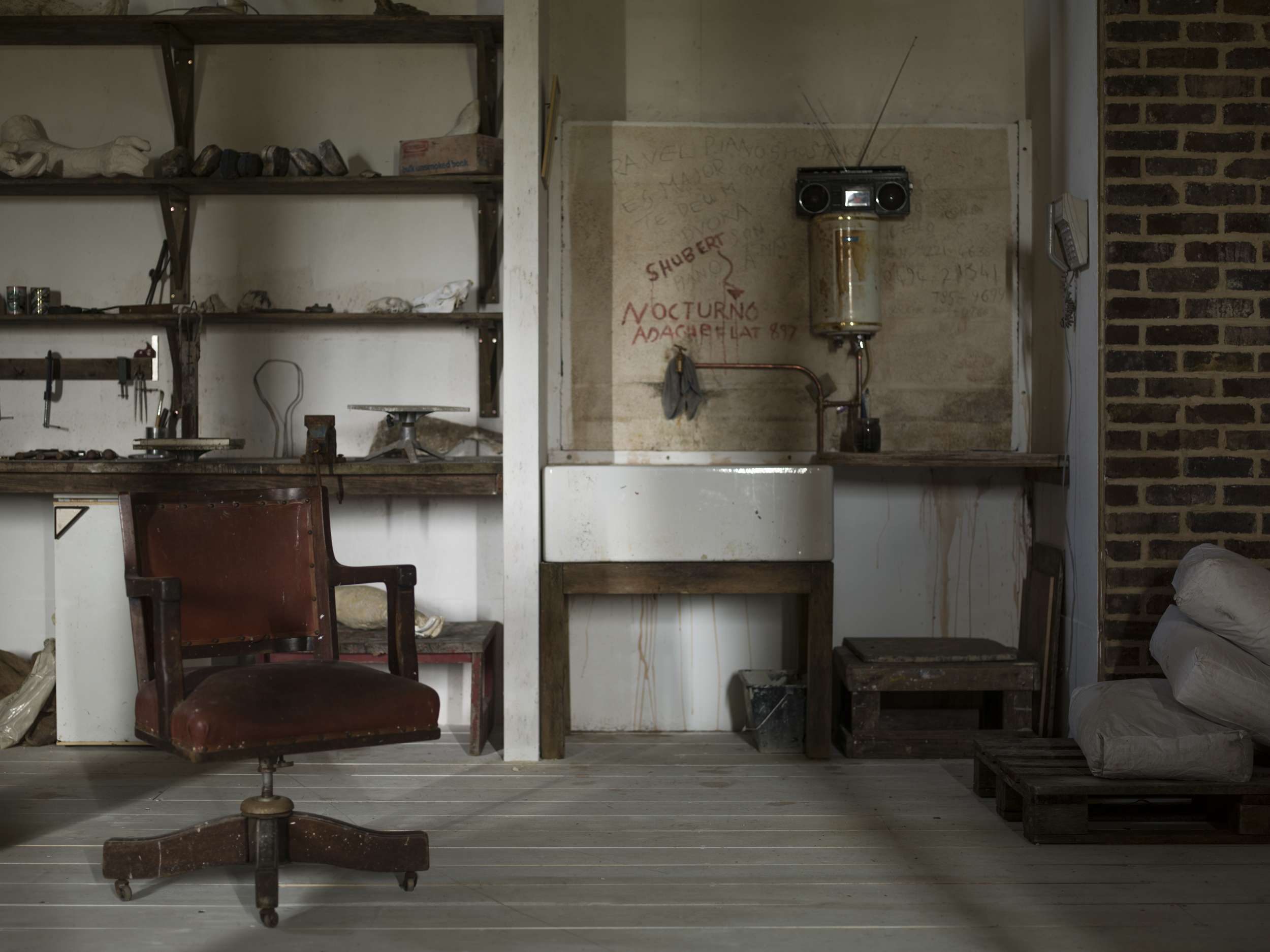 Puccini, Bach, Schoenberg, Mozart and Albinoni were among those found in Frink’s extensive collection of classical music. She started to listen to classical music seriously as a young artist in London, encouraged by the sculptor Jacob Epstein. Epstein would hold evening concerts of musicians and quartets from all over the world at his home and studio at Hyde Park Gate, and Frink was nearly always invited. Frink later described the importance of these evenings with Epstein, saying that ‘for a young artist it was the most amazing experience, to listen to good music, to be able to talk to him and wander around his studio’.

Frink had Jazz records from Ella Fitzgerald, Stéphane Grappelli and Fats Waller amid the Wagner, Kodály and Debussy, and frequented Jazz bars whilst studying at the Chelsea School of Art. She herself stated that she “led rather a life. We used to go to Jazz clubs, dance all night, sleep a little bit and go to art school for half-past night”. Her friend Jonathan Adams (a jazz pianist) is credited in her biography by Stephen Gardiner with helping Frink come out of her shell, as she was very shy in her youth.

Other genres appear too, such as albums from Portuguese Fado singer Amália Rodrigues. Nevertheless, most of her records, tapes and CDs show a love of classical music that continued from those evenings with Jacob Epstein to her final years at Woolland.

As can be seen in the image of her studio sink above. Frink would often graffiti the name of music and musicians she enjoyed listening to at the time. Schubert can be seen prominently in red as well as Ravel. Her enjoyment forever immortalised within the stone.

At Messums we have put together a Spotify Playlist of all the music found at Frink’s studio. 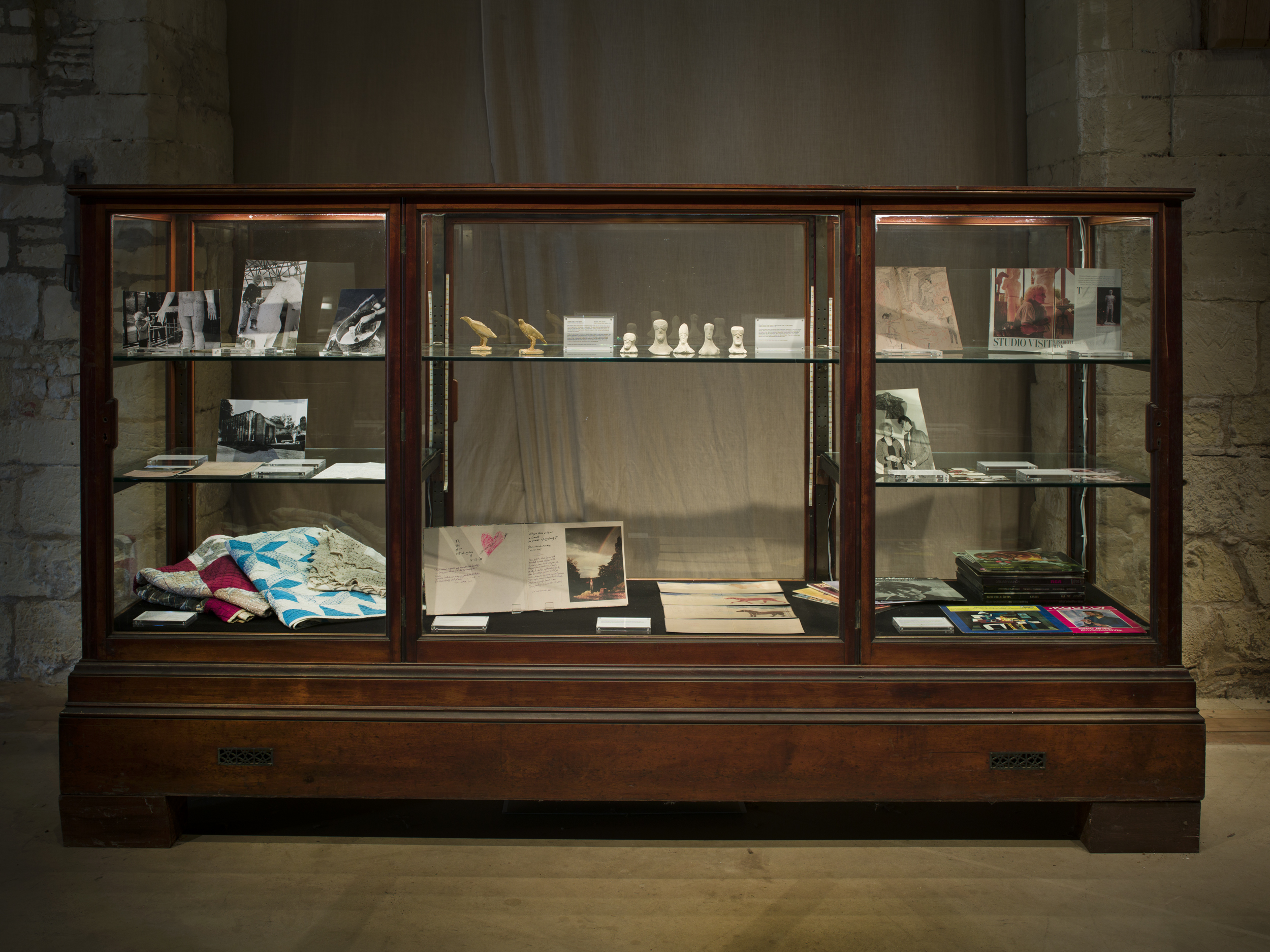 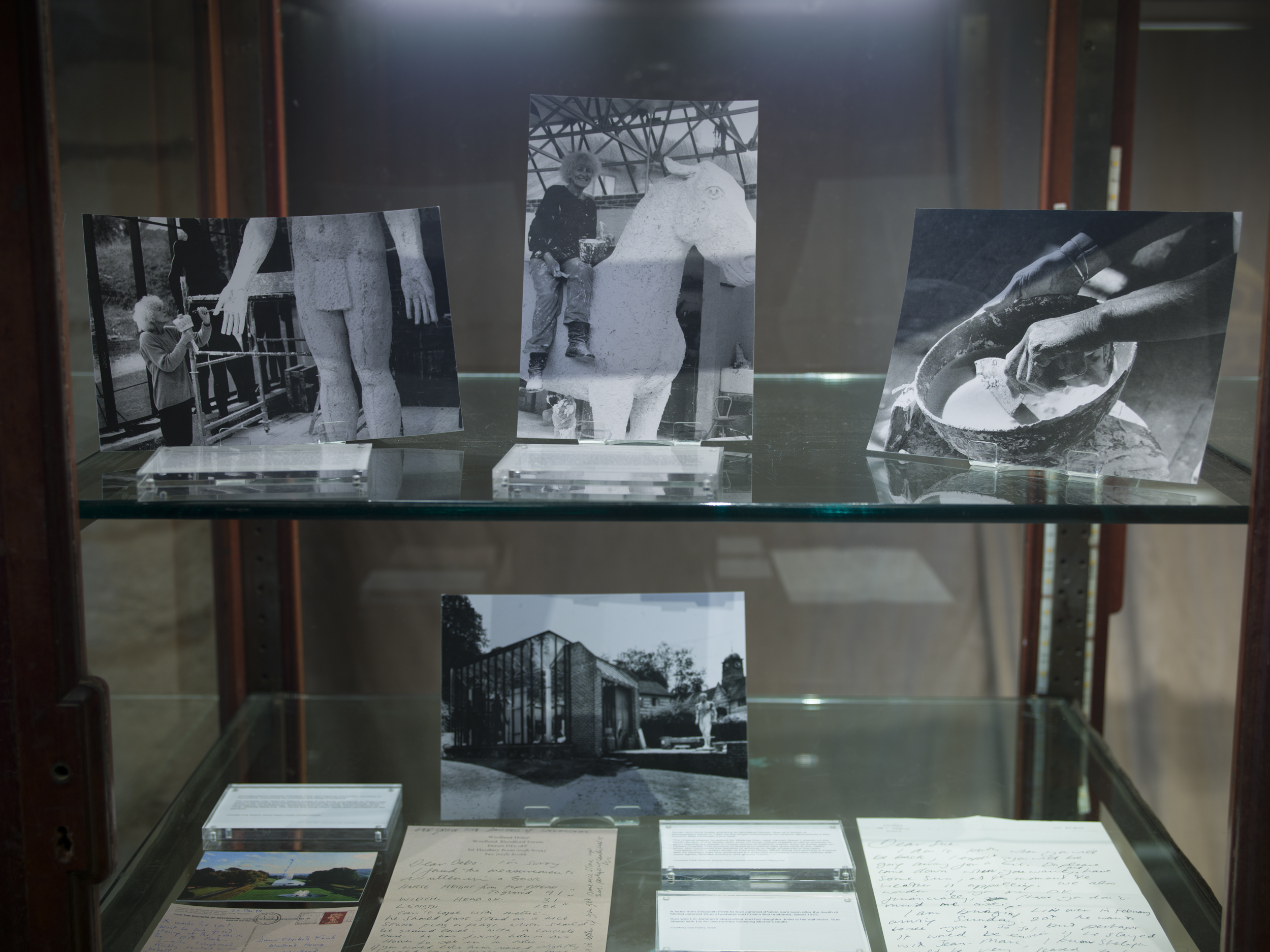 When Frink first went to Guildford art school she carved in wood and had attempted stone. However, she found these methods of sculpting slow and inflexible for what she wanted to achieve. She also tried to clay modelling but also found this process slow.

It is not exactly known how she decided on using plaster, however she may have heard that Giocometti used it in his creative process. At the Chelsea School of Art, her mentor Bearnard Meadows taught in it and Henry Moore ( a regular visitor to the school) also used it, which may have prompted the decision.

For Frink, the ideal material was Plaster of Paris which came as a fine powder and set within minutes. It matched the speed at which she created. It also got rid of the lengthy processes involved in other modes of sculpting. With plaster, she could model and carve. When talking about plaster Frink said “ The process is totally flexible that’s one of the marvellous things about working in plaster.” She also said that she got her ideas very quickly and using plaster mirrored that pace.

Once it is set you have a completely rigid thing to work on and take to the next stage and it is not like clay which is always falling apart and dripping”. When addressing why she didn’t use clay she said that “ I hate using clay apart from everything else it weighs a tone”. She would carve back right from the beginning of forming the piece. Frink said that it “was a constant process of rebuilding and adjusting, of carving back until I have what I want”.

Frink’s method involved building up layers of plaster on top of chicken wire. Her plaster was often soaked in hessian which gave a good surface to build up from. She then would give further texture to the plaster by mixing up materials such as sawdust, making it appear grittier in texture. 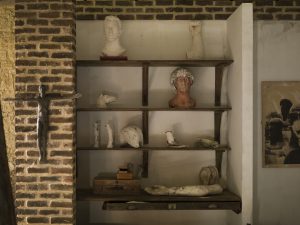 This exhibition would not have been possible without the time, expertise loans and support of the following people and organisations: 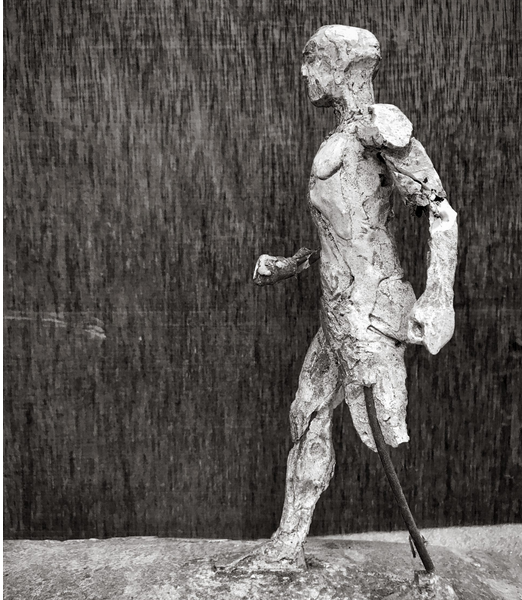 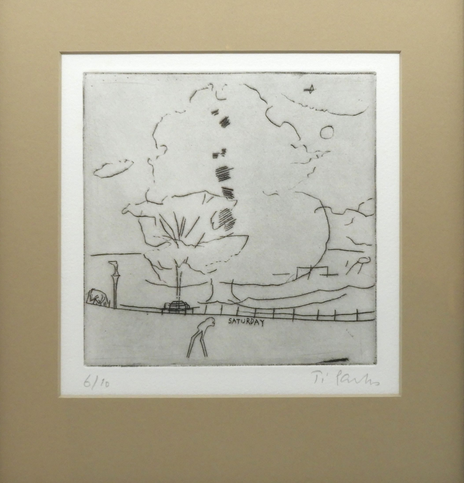